'The Bicycle as an Alternative' to Bogotá's Traffic Jams

Today's El Tiempo editorialized in favor of promoting bicycling as a transport alternative, by building more bike parking lots and bike lanes. Bicycling is a "healthy and free-moving form of transport, whose use doesn't produce congestion and if friendly to the environment."

They're completely correct, of course - but the ambitious editorial and Bogotá's still-enduring reputation as a cycling-friendly city make the reality all the more sad. Certainly, Mayor Peñalosa did make Bogotá a pioneer - but the city's lagged since then, and its few recent efforts have been half-hearted.

A few years ago, this bike parking building opened near the Las Aguas TransMilenio station - altho only after years of delay. The building is also unnecessarily expensive and its design could be much better - but it seems to be a success. Today a guard told me that they get about 200 users a day, who park their bikes free of charge. If a significant proportion of those people are using their bikes because of the convenient and free parking, then I bet it's a good deal for the city in reduced pollution, congestion and improved health, not to mention for the cyclists themselves. 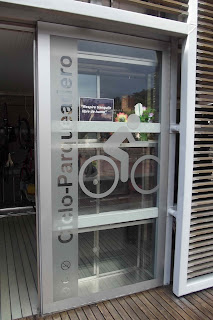 Unfortunately, recent mayors have done little to expand or even maintain Bogotá's once-vaunted bike lane network. This guy, one of many who camp or park cars in the bike lane behind the Central Cemetery, is indicative of the importance which officialdom gives to cyclists' needs.

Can't help leaving out this photo I tood this afternoon. Why would anybody subject themself to toxic chemical attack?