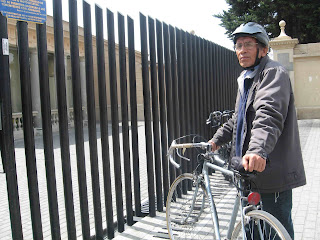 Here's Jorge, who visits his relative's grave every Monday, and has to lock his bike outside the gate.
Bogotá's Central Cemetery is a city unto itself, with thousands of graves, including those of ex-presidents, mayors and other luminaries. In this highly-Catholic nation, many people visit their relatives' gravesites regularly. But don't think about coming here on a bicycle - because you won't find a place to park. The cemetery's security guards explained to me that there isn't enough room - but there IS plenty of room, and there's even room enough for a parking lot for CARS! It's yet another example of the mindset which takes automobile parking for granted but considers bicycle parking a luxury - even in a polluted, car-choked city like Bogotá. I contacted the city department in charge of the cemeteries, and learned that they are required by law to provide bicycle parking - a law they've successfully ignored. But the guy in charge did send a letter to the contractor managing the cemeteries asking them to install bike racks.

We'll see what happens.
This blog is written by Mike Ceaser, of Bogotá Bike Tours

Feb. 4 was Bogotá's annual Car-Free Day, a decade-old tradition. It's one of the few cities to have such an event. Car-Free Day's goal is primarily to demonstrate to auto-addicts that they CAN get to work or school by means other than the private automobile (or taxis, which abounded). Yesterday, congestion dropped dramatically and carbon monoxide 43 percent, but the many old buses meant that pollution continued.

Unfortunately, since car-free day is only one day, many car owners simply postpone things until the day after, producing more congestion on Feb. 5. The city should rather have such days weekly or monthly, so that it becomes a custom rather than an oddity. Bogotá's pico y placa law prohibits cars from circulating two days each week, according to the last digit on their license plates. However, the rule also promotes the purchasing of second, often used, cars. The best solution by far would be a London-style congestion tax. 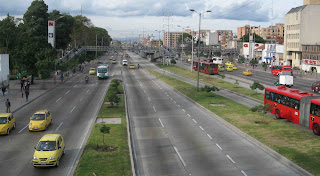 This blog is written by Mike Ceaser, of Bogota Bike Tours