How to Make Bogotá Bikeable

At a conference in La Candelaria this evening, speakers talked about how to make Bogotá more bikeable.

Bogotá has, of course, become known globally for its pro-cycling projects, mostly the ciclorutas and Ciclovia. But, for all that Bogotá's done for bicycling, which is lots more than have many other developing world cities, today's speakers described the cup as half-empty.

Camilo Rey, of Verde Extremo, gave an impassioned talk about his group's mountain biking activities - which hopefully will translate into more people riding bikes in the city - in addition to loading them onto cars and pedaling across the countryside.

City Councilman Roberto Saenz, also a leader of Agenda Bogotá, gave some disappointing statistics. Bicycling proponents have complained a lot recently about the lack of maintenance and expansion of the city's Cicloruta network. But Saenz said that the city government in fact does have a big budget for the ciclorutas - but that city officials bungled the contract process and so cannot spend the money.

Saenz also talked about something which hits close to my heart and lungs. A couple of years ago, the state oil company EcoPetrol promised to slash the percentage of sulphur, the primary pollutant, from over a 1,000 parts per million down to 50 ppm, which is a respectable number for a developing country, albeit still much higher than that in the U.S. and Europe. Unsurprisingly, it hasn't happened, and Bogotá's diesel still contains a poisonous 300 ppm of sulphur. Pour that stuff into Bogotá's fleet of ancient cars and buses and its new fleet of cheap Chinese vehicles, and it's no wonder that many avenues are still smoky canyons. And why cyclists are forced to choke on fumes.

EcoPetrol had said that because of its lack of refining capacity it would import clean diesel in order to provide clean fuel for the capital. Instead, it looks like the EcoPetrol execs believe it's more important to increase profits and let Bogotanos continue breathing smoke until their new refinery is finally on line. Even so, Bogotá could still do lots to clean its air by junking dirty vehicles and enforcing pollution laws generally.


Saenz offered a scary statistic: some 300,000 new cars enter Colombia every year, delighting retailers but condemning the city to worsening traffic gridlock and pollution. It's easy to see that unless the city promotes alternative transport, it'll become unliveable. Nevertheless, insanely, city officials still appear to be building transport policy around an exploding number of private cars.

And Saenz made a key suggestion: Bogotá needs an official in city government with real power charged with advocating bicycling interests, to whom cyclists can go with complaints and ideas. As it is, the huge economic and cultural forces promoting an auto-based culture push the city that way, no matter how unsustainable that model proves itself.

Juan Pablo Garcia, an urban planning expert, showed a study 2010 of urban cycling which found that use of the Ciclorutas has been rising, albeit slowly. The study also found that demand for ciclorutas is much stronger in western Bogotá than on the city's easter side. That's likely because the west is poorer, and most of Bogotá's bike commuters are doing it save money rather than save the world. Sadly, only when more yuppies and execs start pedaling will bikes get priority. But those privileged people won't pull their two-wheelers out of the garage until cycling conditions improve. I call that a Catch-22.

Garcia also pointed out that use of the few TransMilenio stations with bike parking facilities is very unequal. (Why all TM stations don't have bike racks is beyond me).

In any case, Garcia said, the study fell on deaf ears in the city government transportation department.

Yours truly also pitched in, opining that, no matter how great the city's bicycle lanes may be, it won't be a good biking city until it controls pollution, tames traffic and until drivers learn to respect cyclists and pedestrians.

Finally, Jesus Acero described the advances of the public bicycles system in the city of Medellin, where the concept is actually advancing and will soon launch two pilot projects, one in the city and another in a park area outside of it. Their system sounds sophisticated - the bikes will have GPSs and use solar power. Users will have to register, and the first hour will be free. But they're dealing with a legal complication which will also hinder a public bikes program in Bogotá, if the city ever starts one. Medellin requires cyclists to wear helmets, but the sort of casual riders who will use the system aren't likely to carry bike helmets around with them all day. So, Acero said that as a sort of half-way solution, which sounds like a token gesture to city officials, they're going to give bike helmets to the first 100 people who sign up for the public bikes program. Hopefully, those people won't leave their helmets at home.

Even so, Medellin's biggest challenge is likely to be the city's hills. 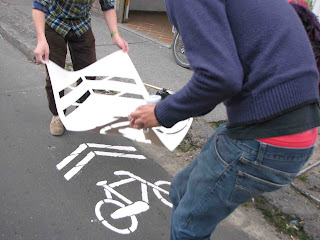 Bogotá's known for its network of bicycle lanes, known as Ciclorutas. But lots of streets frequented by cyclists lack them. As part of Bogotá's Bicycle Week, a group designated new 'Ciclorutas' by stenciling bicycles onto streets near the Central University. 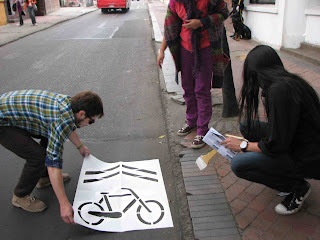 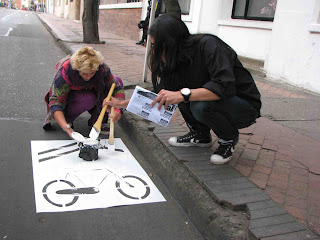 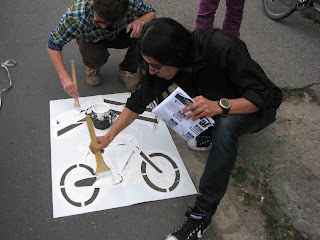 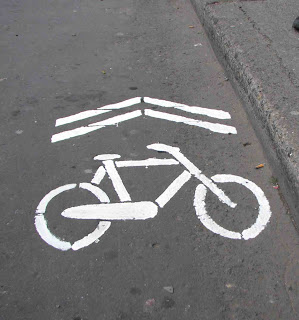 This evening, in honor of Bicycle Week, the regular Ciclopaseo de los Miercoles (Wednesday Bicycle Ride) started out by the Universidad Central instead of is usual starting point in north Bogotá.

The ride, consisting of about 80 people, rode thru La Candelaria and then south, thru Belen, Las Cruces and other poor, rough neighborhoods where outsiders ordinarily have to be wary even during the day. Our group stuck together, and when someone got a flat tire, we all waited.

Ride the City, a website which provides information for cyclists about routes, repair shops and destinations, now has a Bogotá page.

This provides another excuse for looking at the state of Bogotá's system of bike lanes, called ciclorutas.

Bogotá's ciclorutas have received lots of criticism recently for deterioration and lack of connectivity. While those criticisms are somewhat true, I don't find their condition worse than that of many Bogotá streets, which is often poor. And, while it's true that the ciclorutas often don't connect, they do go to many places. However, poor design - many are on sidewalks, where they fill with pedestrians, or run alongside congested roads, forcing cyclists to swallow diesel fumes - and lack of civic culture: the ciclorutas get blocked by cars and handcarts, discourages cyclists from using them (or bicycling at all).

In addition, I'd understood that all new TransMilenio lines were to include ciclorutas, but that doesn't appear to be happening at least on Calle 26, which runs to the airport. Some other places, the opposite is happening.

Here, a look at the good and (mostly) the bad, the new and the old, of Bogotá's ciclorutas.

Bogotá's Bicycle Week 2011 included a bicycle polo match in the National Park. I missed it, but got some pics of the colorful bicycles, almost all of which are 'fixies.'

Fixed-gear bicycles have become much more common here during the last few years, altho they still number in the low dozens, I suspect. They've also got their own very active organization: http://www.bogotafixed.com/ 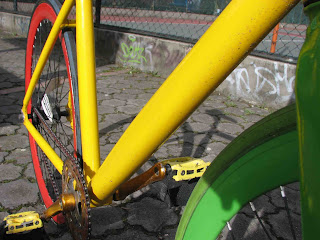 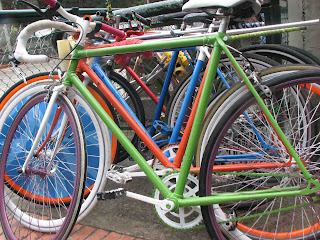 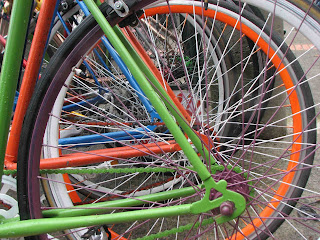