Give Bogotá's Institute for Recreation and Sports, the IDRD, credit for doing something good. Over the last 45 days or so it's added two more bike lending locations: on the National University's campus and in Virrey Park in north Bogotá. 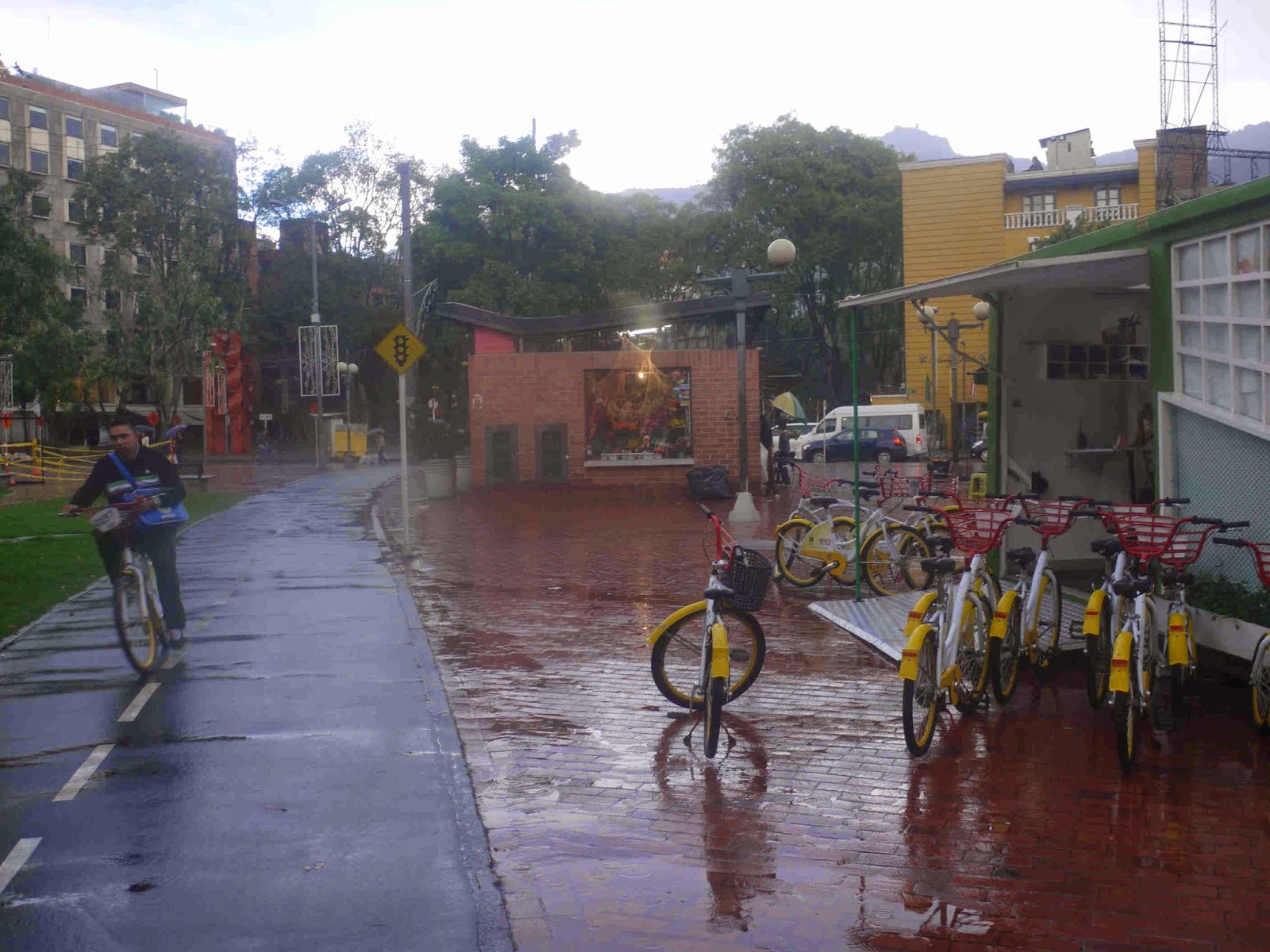 But if only the program were all it could be.

Yesterday afternoon I visited Virrey Park, where the 40-odd free lending bikes were mostly sitting still - understandably, in the chill and rain. City workers told me that they lent about 40 bikes on a typical day - which is nice, altho it's an expensive way to get people pedaling, considering the wages of the eight employees I counted, plus all the other costs.

Meanwhile, on the program's Carrera Septima corridor, the bicycles are getting steady use.

In contrast, on the National University's campus, most of the bikes appear to spend their days parked, despite the Nacho's flat terrain and many thousands of students. Today, I learned one reason why. It turns out that, for incomprehensible reasons, the IDRD arranged the campus bicycles program with individual university schools rather than the central university administration. So far, only two of the university's eleven schools, arts and engineering, have taken the trouble to sign up.

So, if you're an artist, then grab a bike. But if you study nursing, political science or chemistry, then you're out of luck, unless you registered for the bike program on your own.

But the program has a larger shortcoming. The IDRD's mission is to promote recreation. But the great majority of the bikes' borrowers use them for transport, albeit for short distances. But, frustratingly, users are only permitted to use bikes within each of the three lending areas, but not to pick up a bike from one area and drop it off in another.

A program employee agreed with my complaint, but explained that the IDRD's mission is not transport, and worried that bike users could suffer a flat tire or other mechanical problem at a spot too far to walk back. However, the IDRD's mission does not exclude transport. And surely mechanical issues could be resolved with a phone call and mobile mechanical assistance for a small fee.

With Bogotá's long-promised public bicycles program stuck in idle, the IDRD could step in and do both the city and cycling a great favor by making its program a practical commuting option. 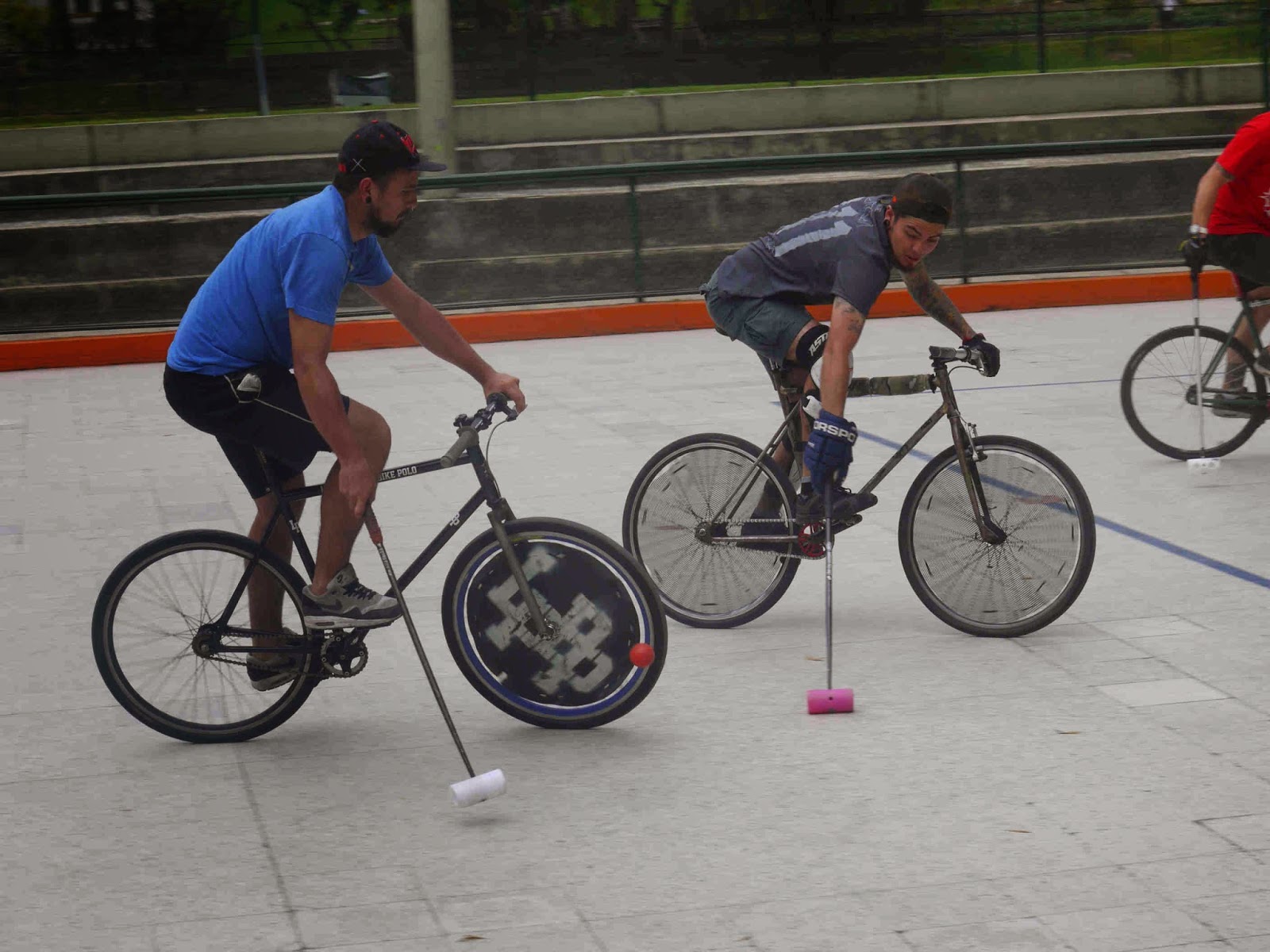 These folks were practicing bike polo in the Parque Nacional today. Last weekend, a regional bike polo tournament was held in Bogotá. 48 men's teams and 18 women's teams competed, and Mexico won in both categories and Brazil finished second.

The sport looks like lots of fun both to watch and play, and it's great seeing it take off. Here's their web page. 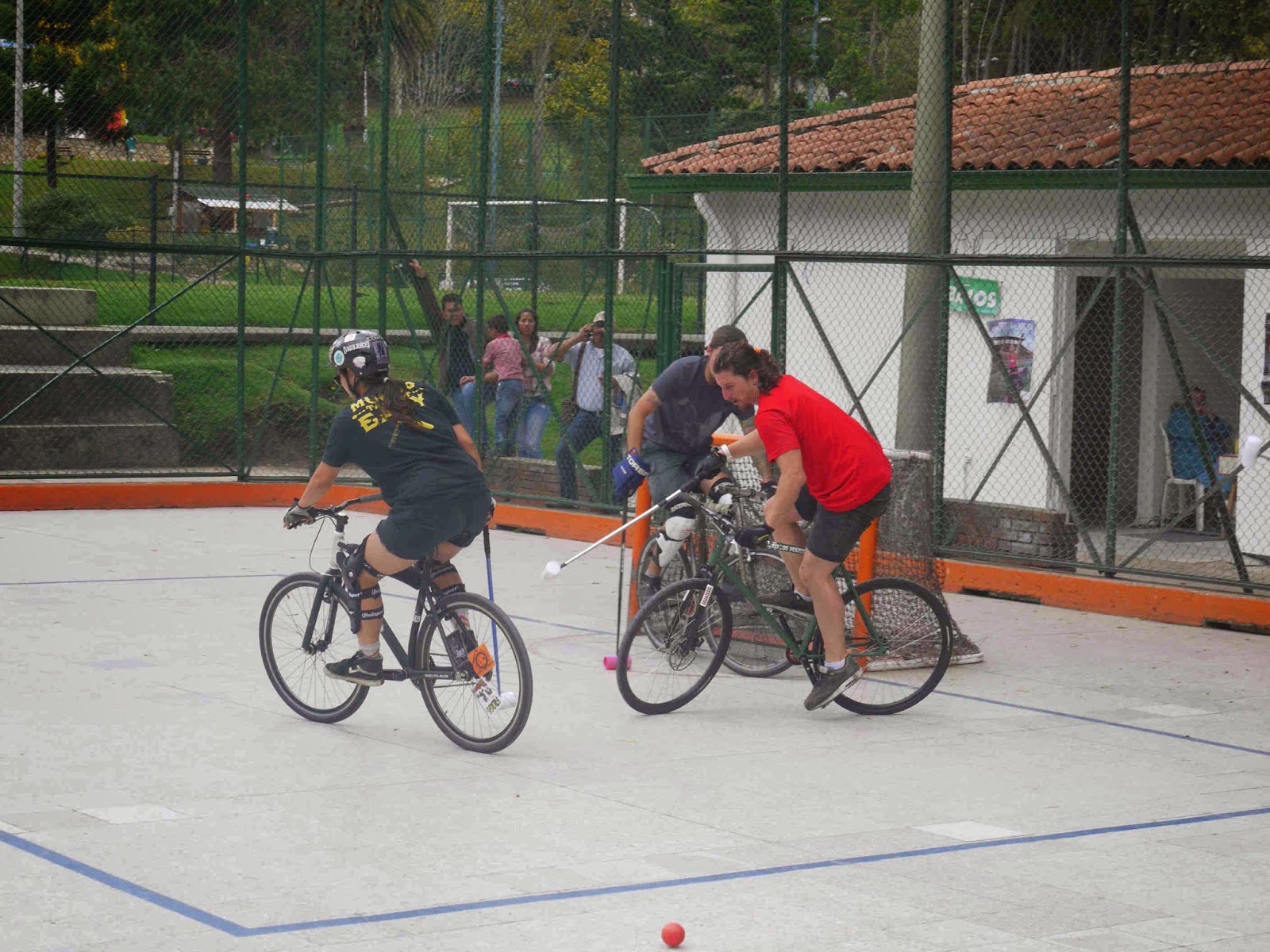 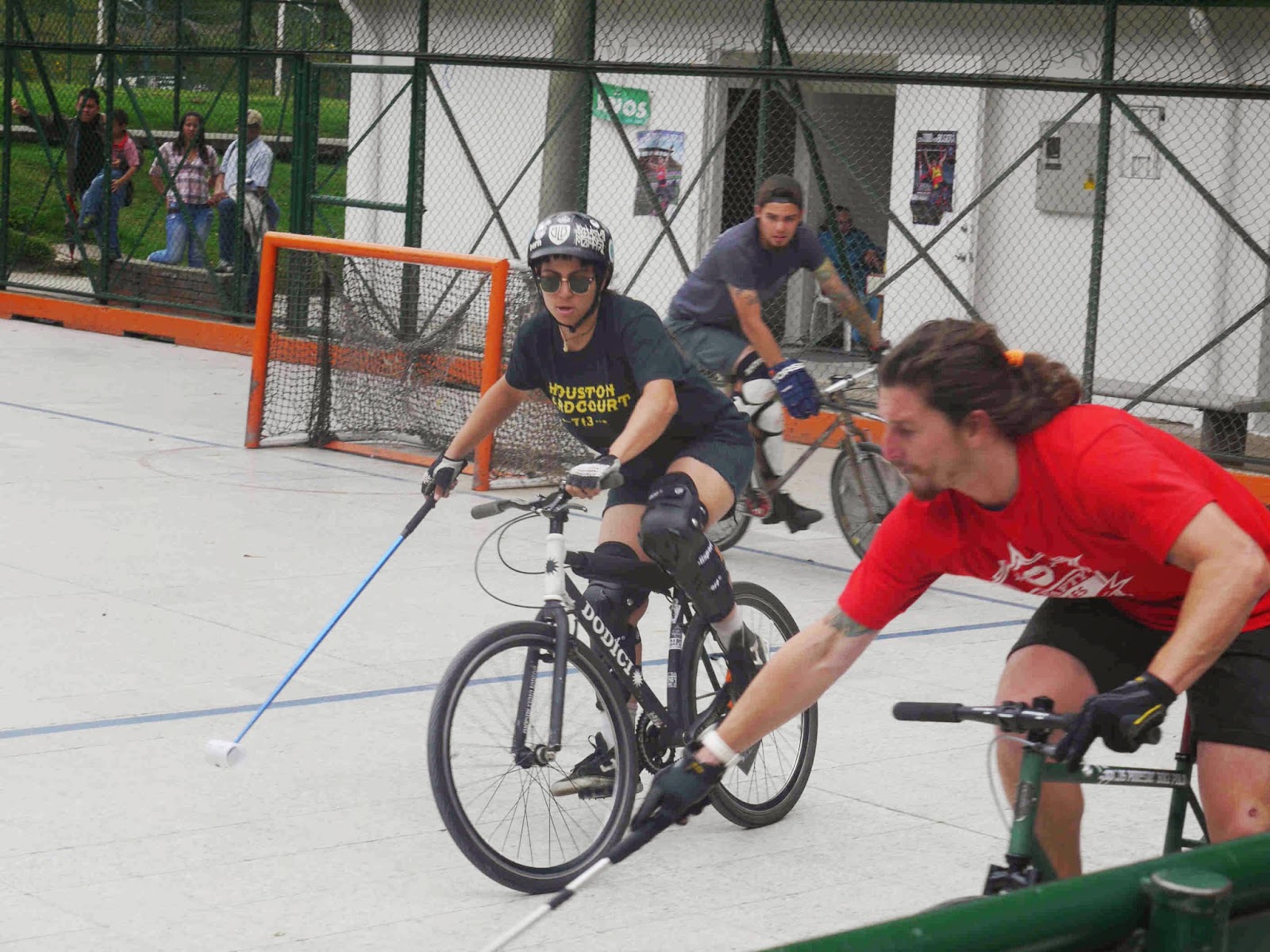 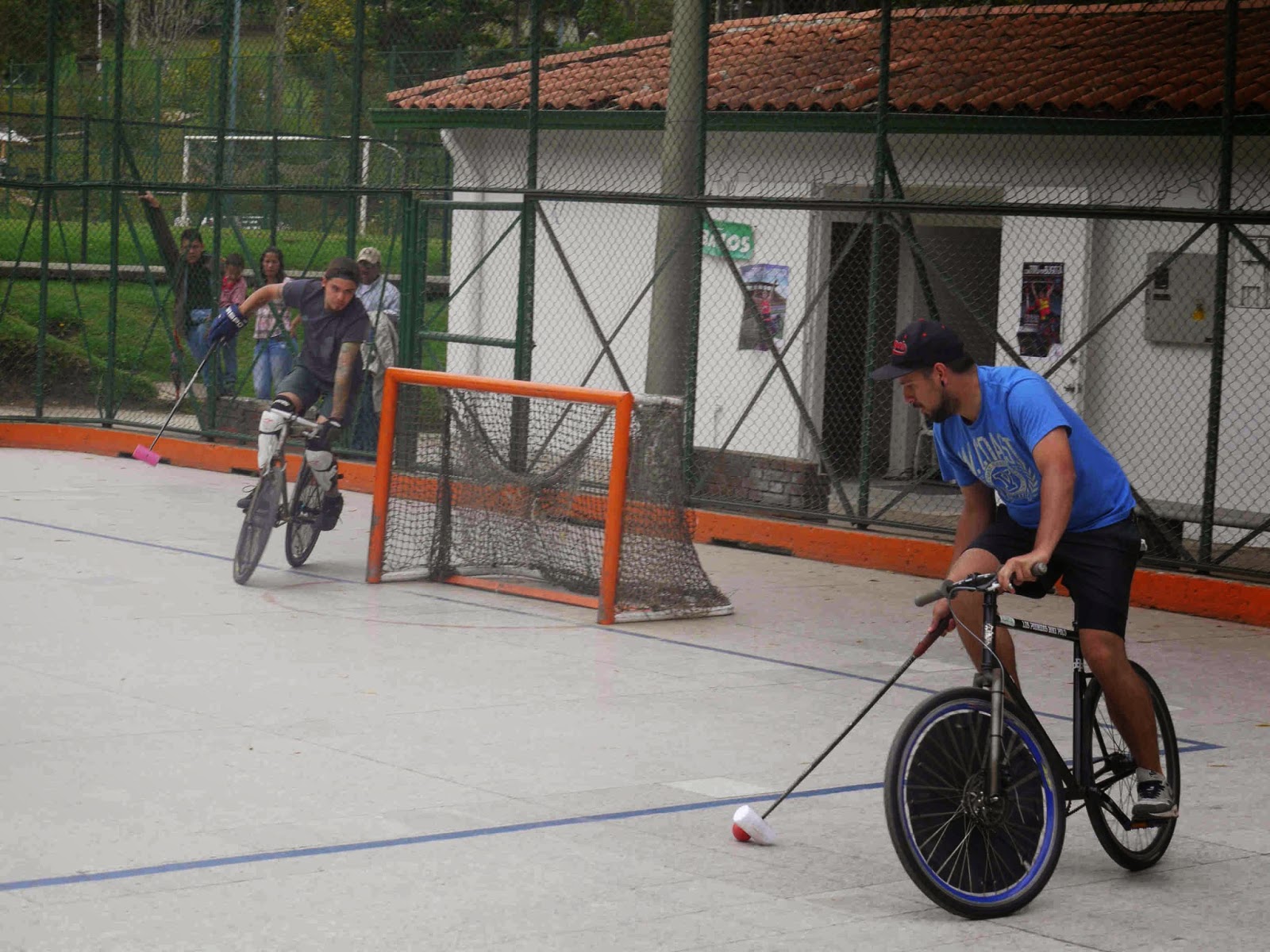 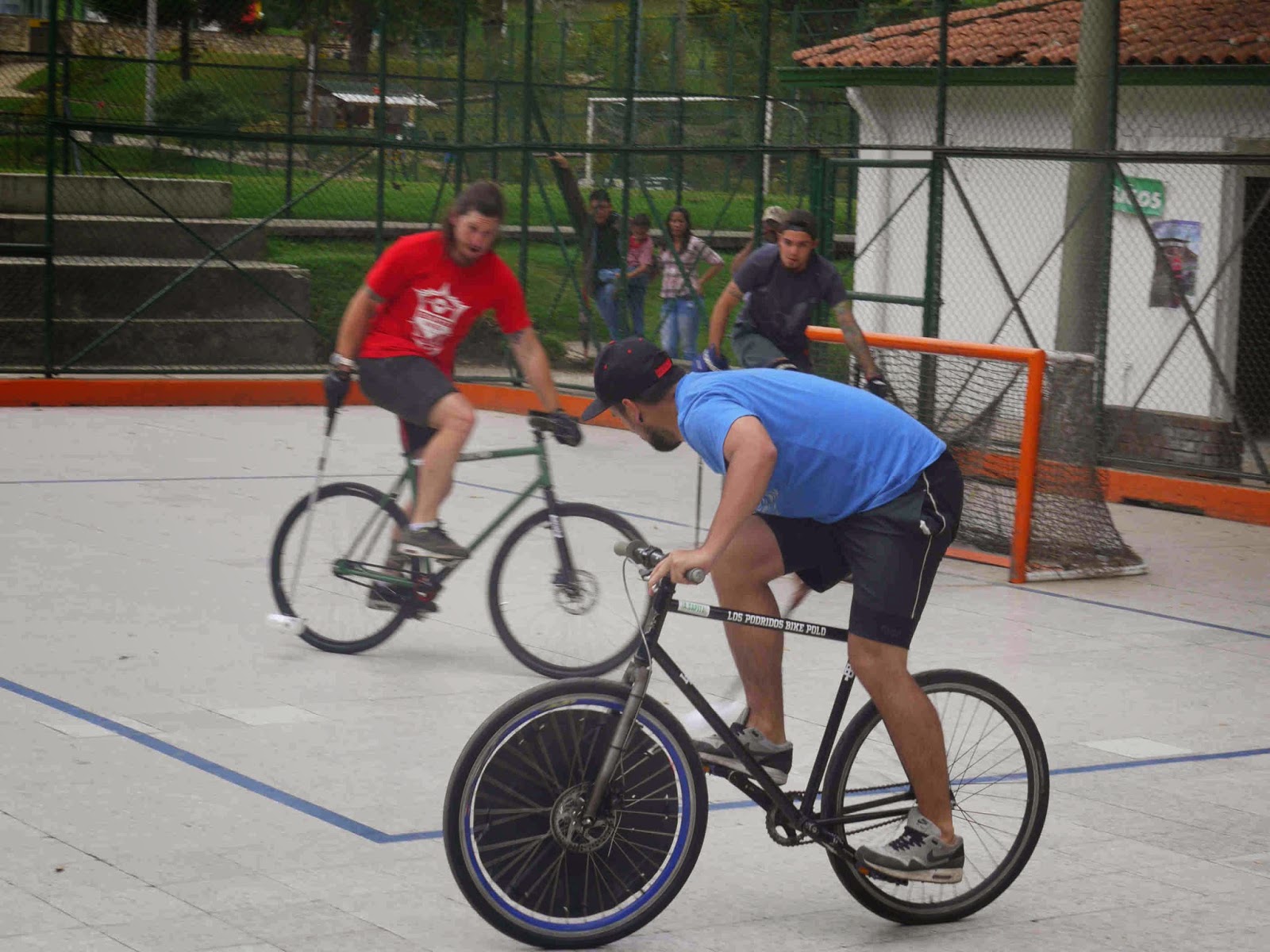 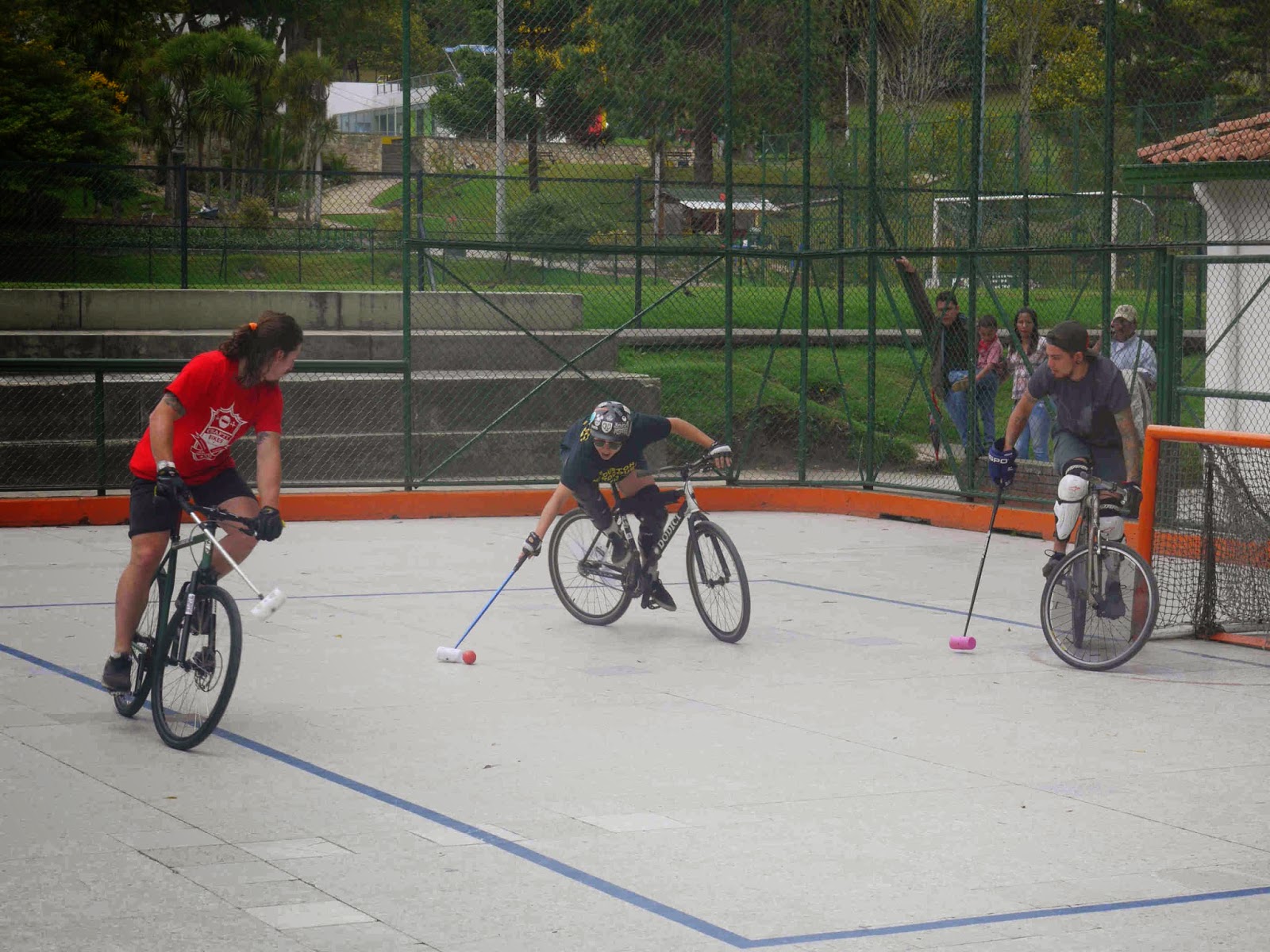 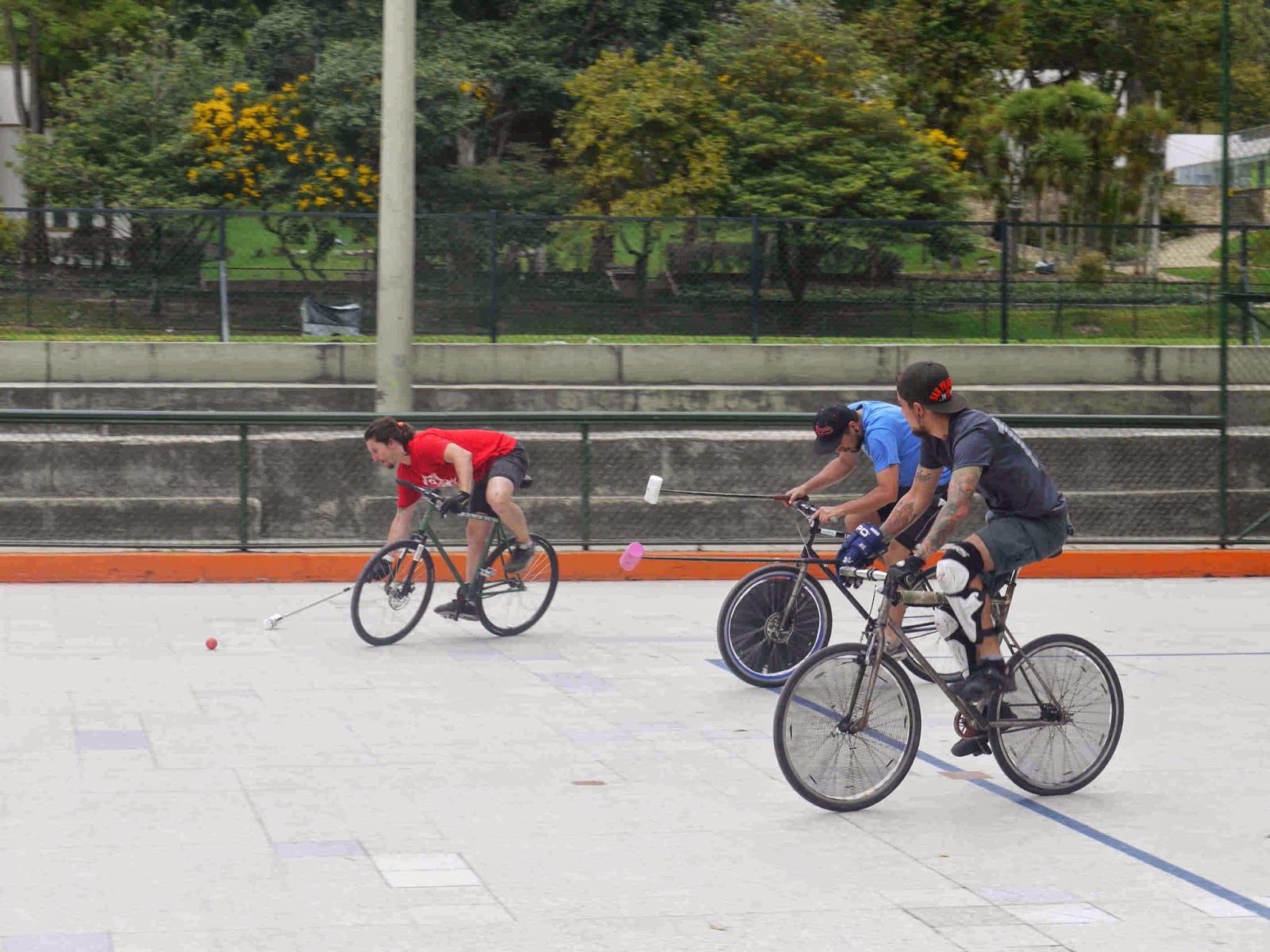 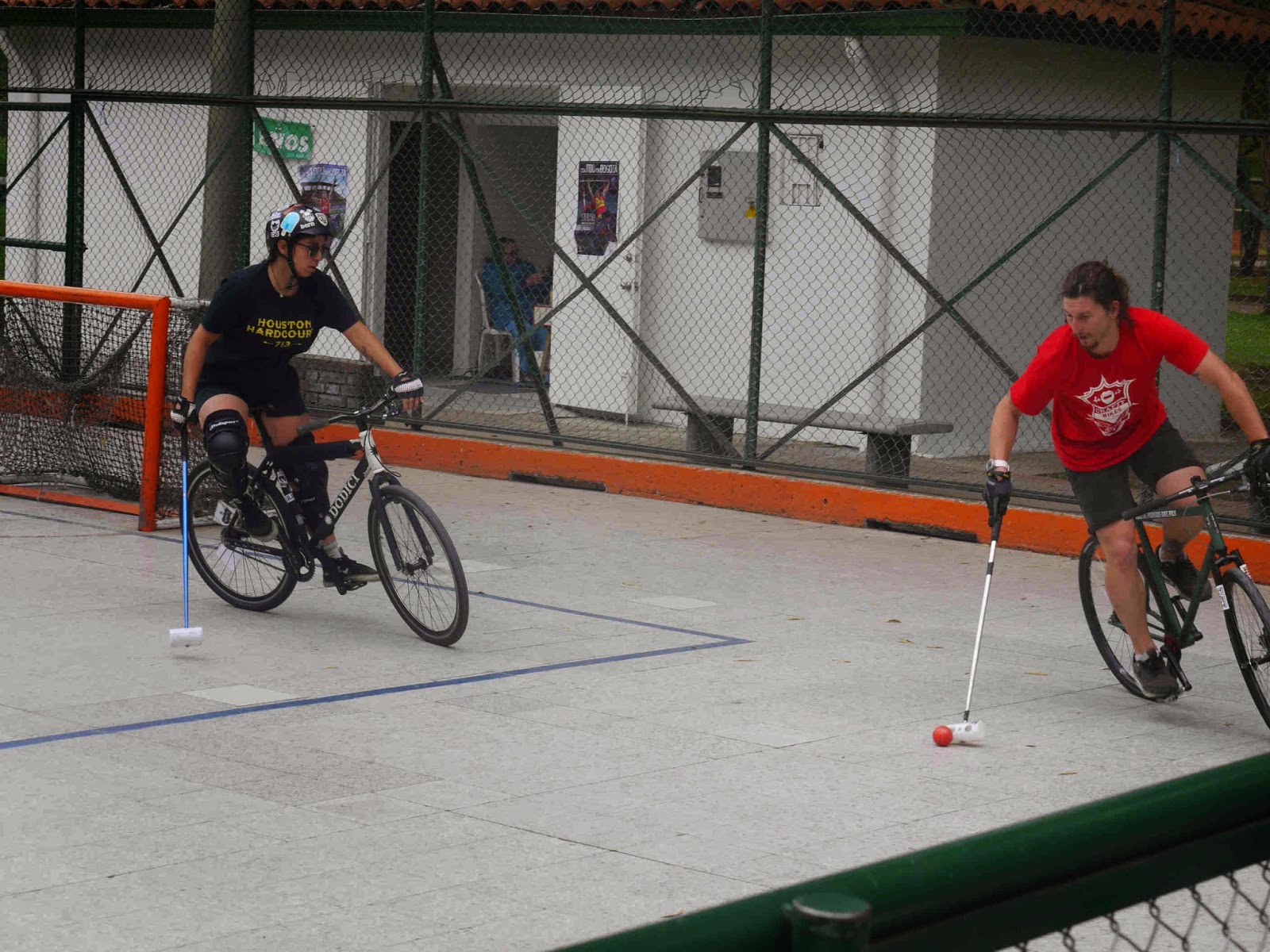 Back on the Bikes at La Nacho

A few years ago, the Universidad Nacional's Bogotá campus bought thousands of simple bikes, painted them green and distributed them around campus. The idealistic concept was that students and others would píck up a bike, pedal it to their destination, and leave it there for someone else to use.

Unfortunately, the users were not so ideal. The bikes got abused, damaged and stolen.

Since nobody knew who had used a particular bike, nobody was held responsible. Finally, the the university, known as La Nacho, scrapped the program.

But now, with 5 lending stations and 115 salvaged and repaired bikes, the program's on again. This time, however, there's responsibility. Users must first register and then show their I.D. each time they use a bike. Eventually, planners hope to have 1,000 public bikes.

The disadvantage of this arrangement is its expense, and the fact that campus visitors can't use the bikes. But that's a small price for having a system which actually works.

Of course, La Nacho never stopped being a bike-friendly place. Thousands of students and others pedal the flat campus every day on their own bikes.

Update: During my frequents visits to the campus I've seen very few people actually using the public bikes. And today, Oct. 29, I learned why. For some senseless reason, the program was not arranged thru the university's central administration, but thru individual schools. As of Oct. 29 only 2 of the campus's 11 schools, arts and engineering, have signed up. Students not in one of those two majors can't use the bikes unless they've registered on their own for the program. 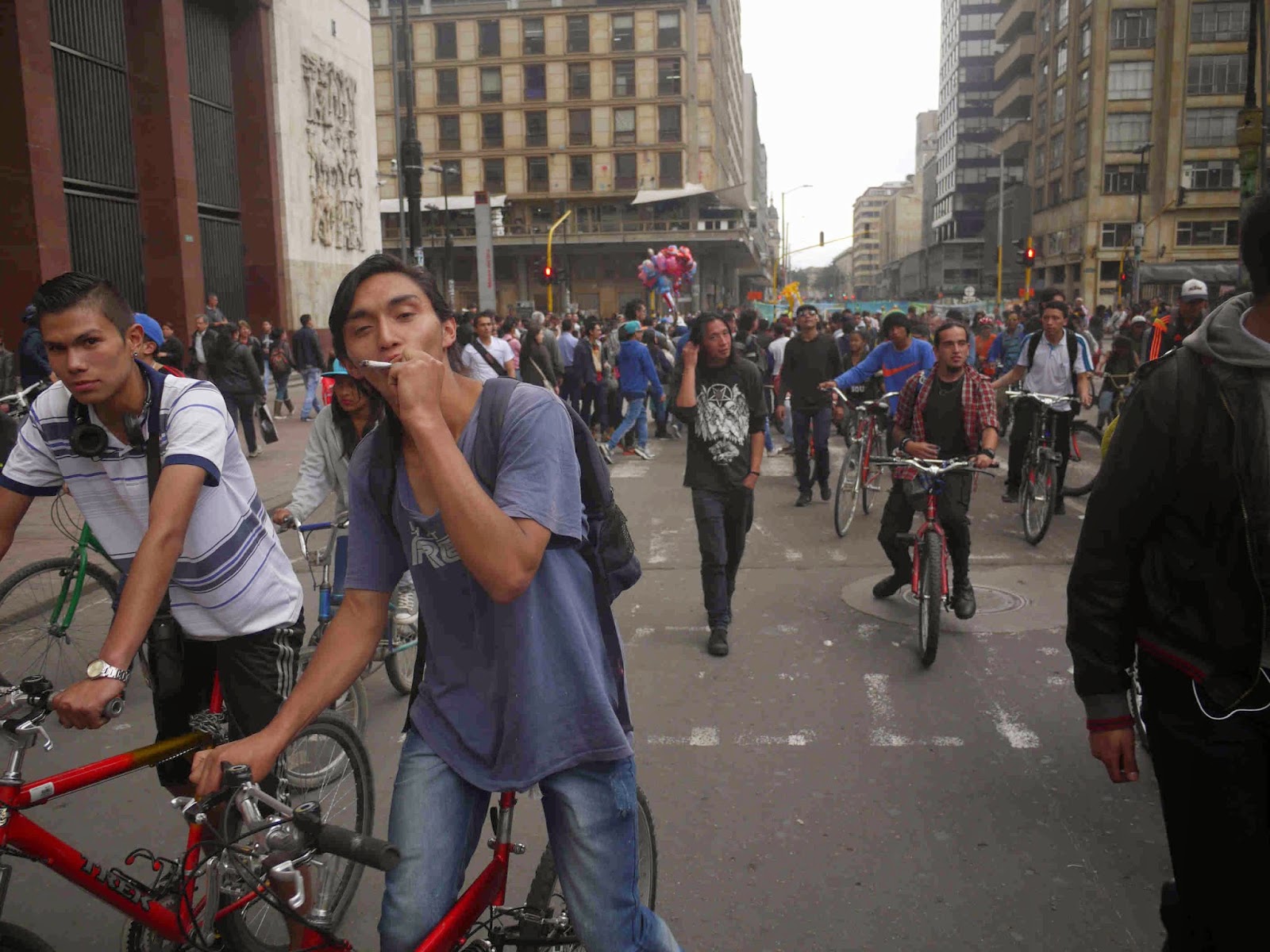 Protesters pedaled thru central Bogotá demanding the return of the 'personal dose' law, which permitted the possession of up to 5 grams of pot for personal consumption. The right was eliminated during the presidency of Alvaro Uribe, who claimed that drug pushers hid behind the law.

Recent court rulings, however, seem to have reaffirmed the right. Still, what courts say and what a cop does on the street are two different matters. 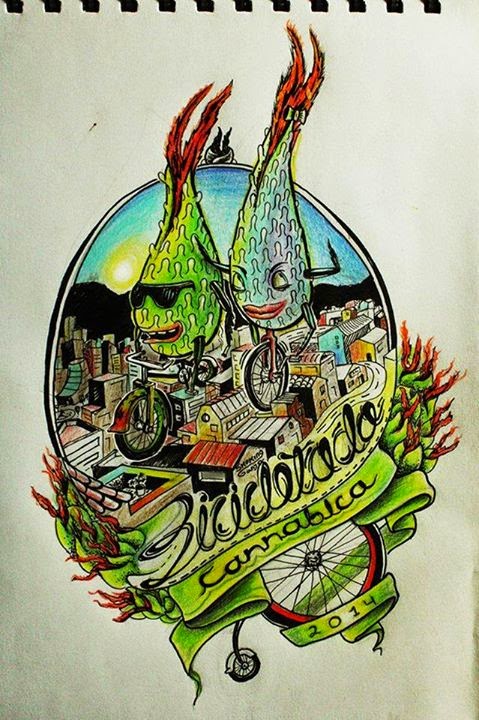 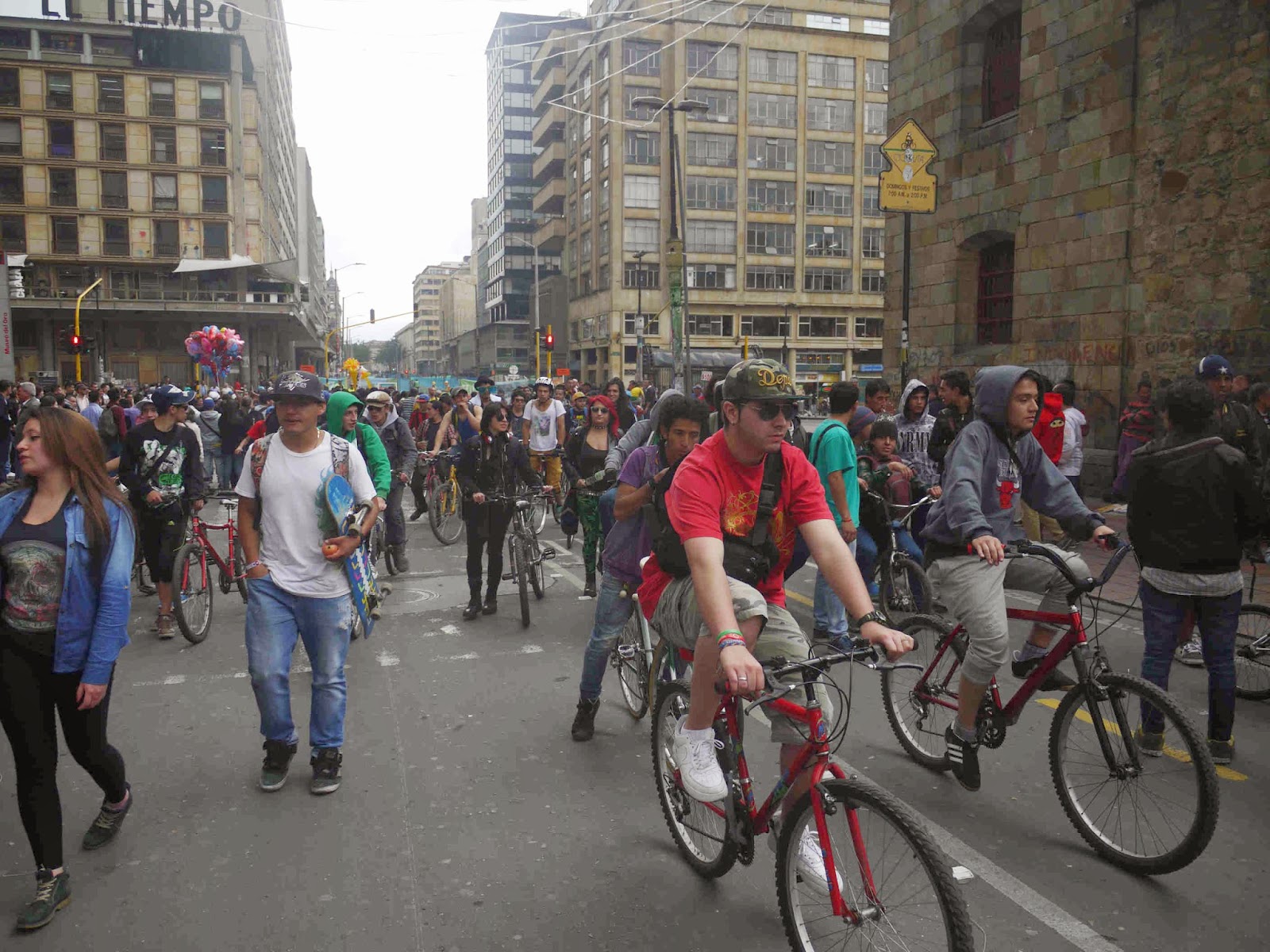 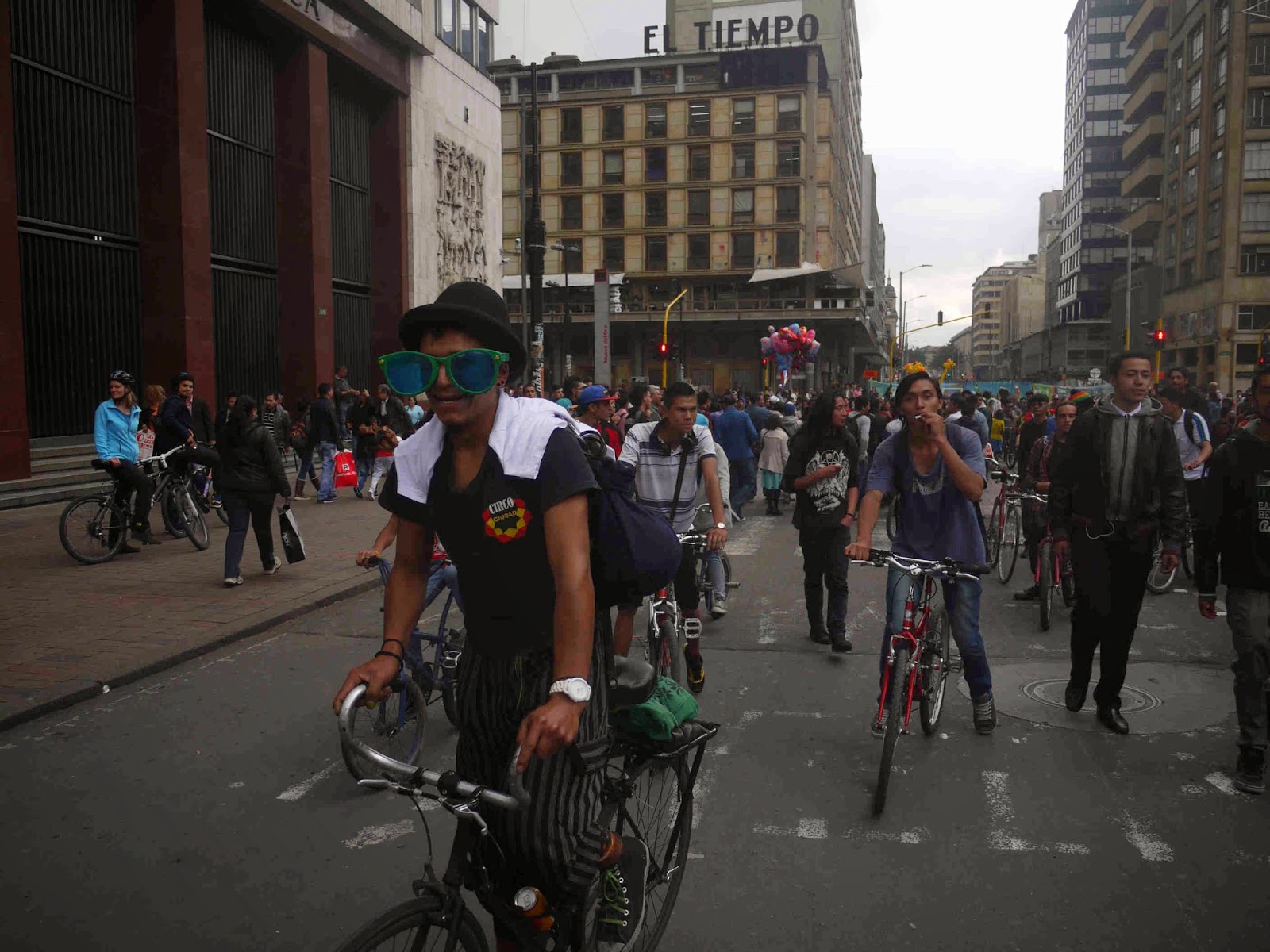 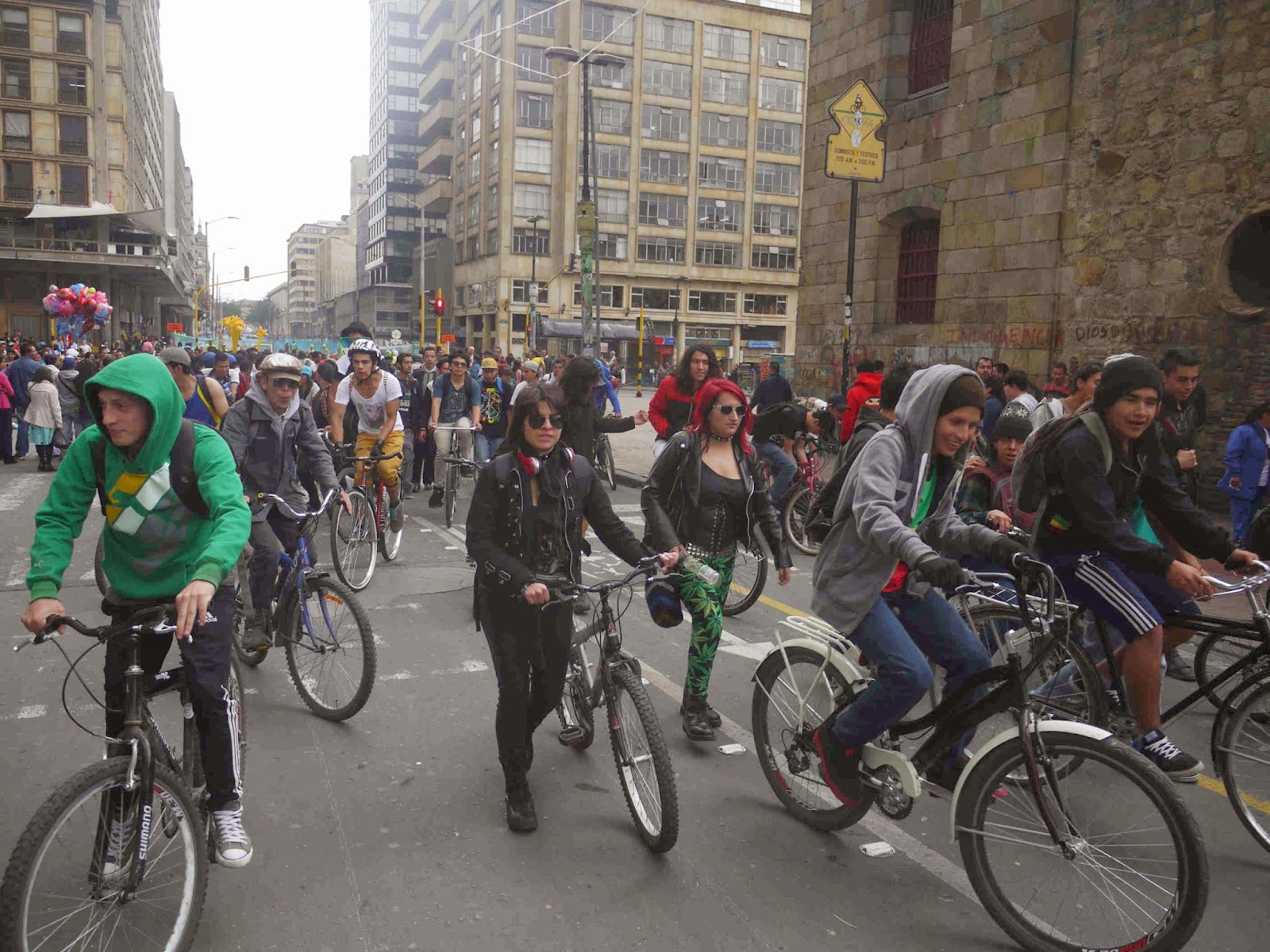 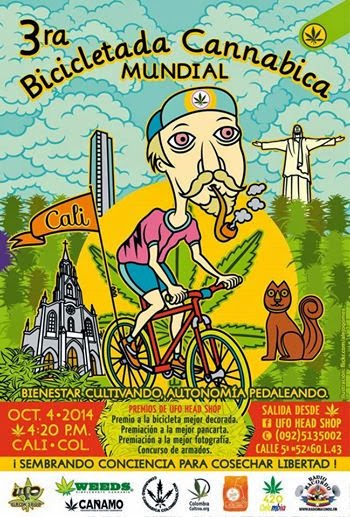 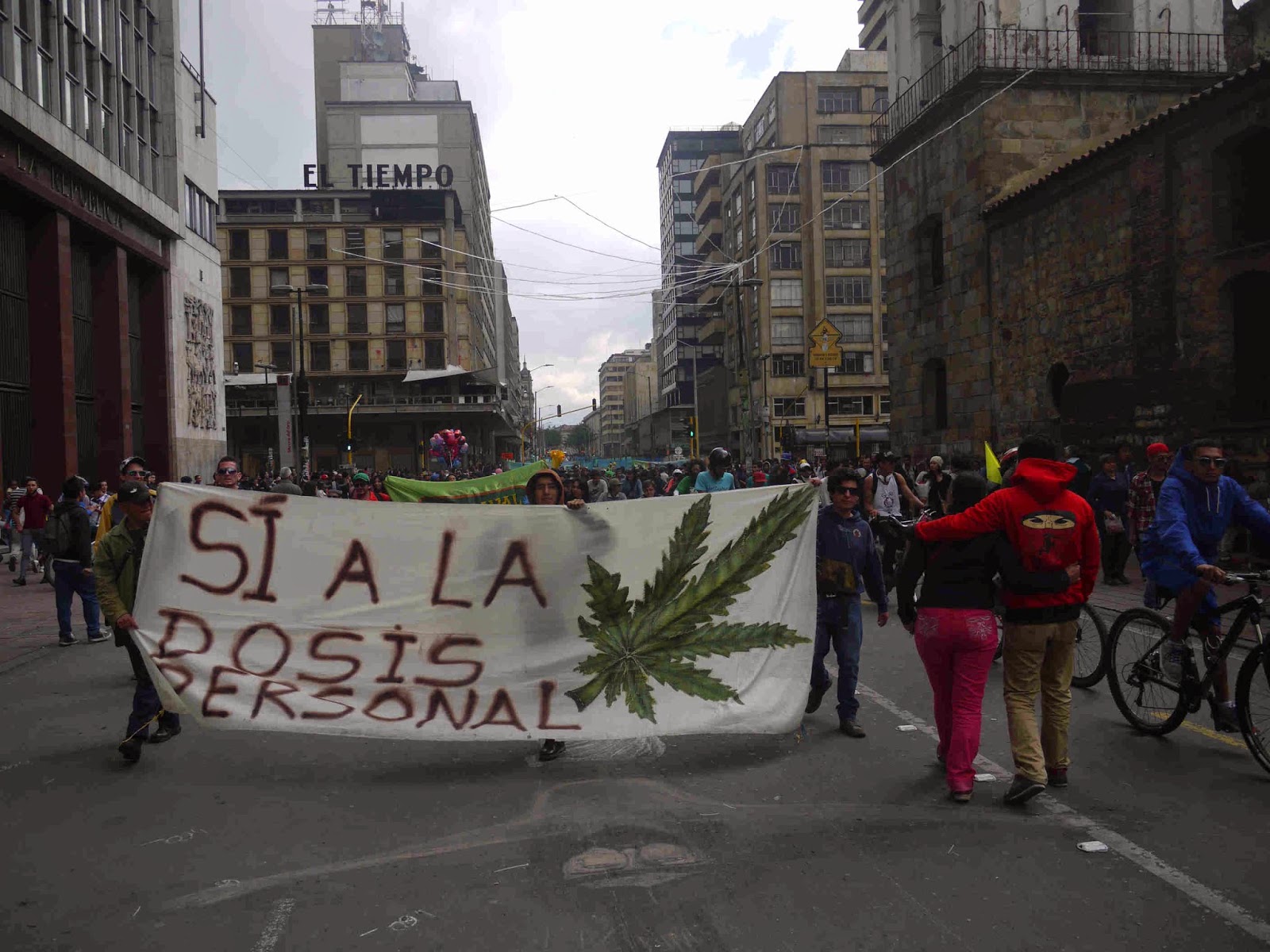