The Cops Are Back on Bikes

About six years ago, Bogotá had cops on bicycles. Bicycling cops are a good thing for several reasons: They're versatile and can go places cops in cars and even on motorcycles can't, and much faster than on foot. Cycling police are also more approachable for the community. (And don't get me started on those expensive, useless, Segways.) And the bikes are inexpensive and make those cops exercise. Finally, you can't sleep the afternoon away on a bicycle the way you can in a car.

Most importantly for us cyclists, having cops on bikes has got to motivate internal combustion vehicles to give two wheelers more respect and room on the street.

Yet, for reasons I can't divine, around 2009 the police scrapped their bikes (some of which were purchased by Bogotá Bike Tours).

Recently, however, two-wheeled Bogotá police have reappeared. (At least, the teenage 'auxiliar' police, anyway, who are getting their 'obligatory' military service requirement out of the way.)

A Cycling Czar for Bogotá? 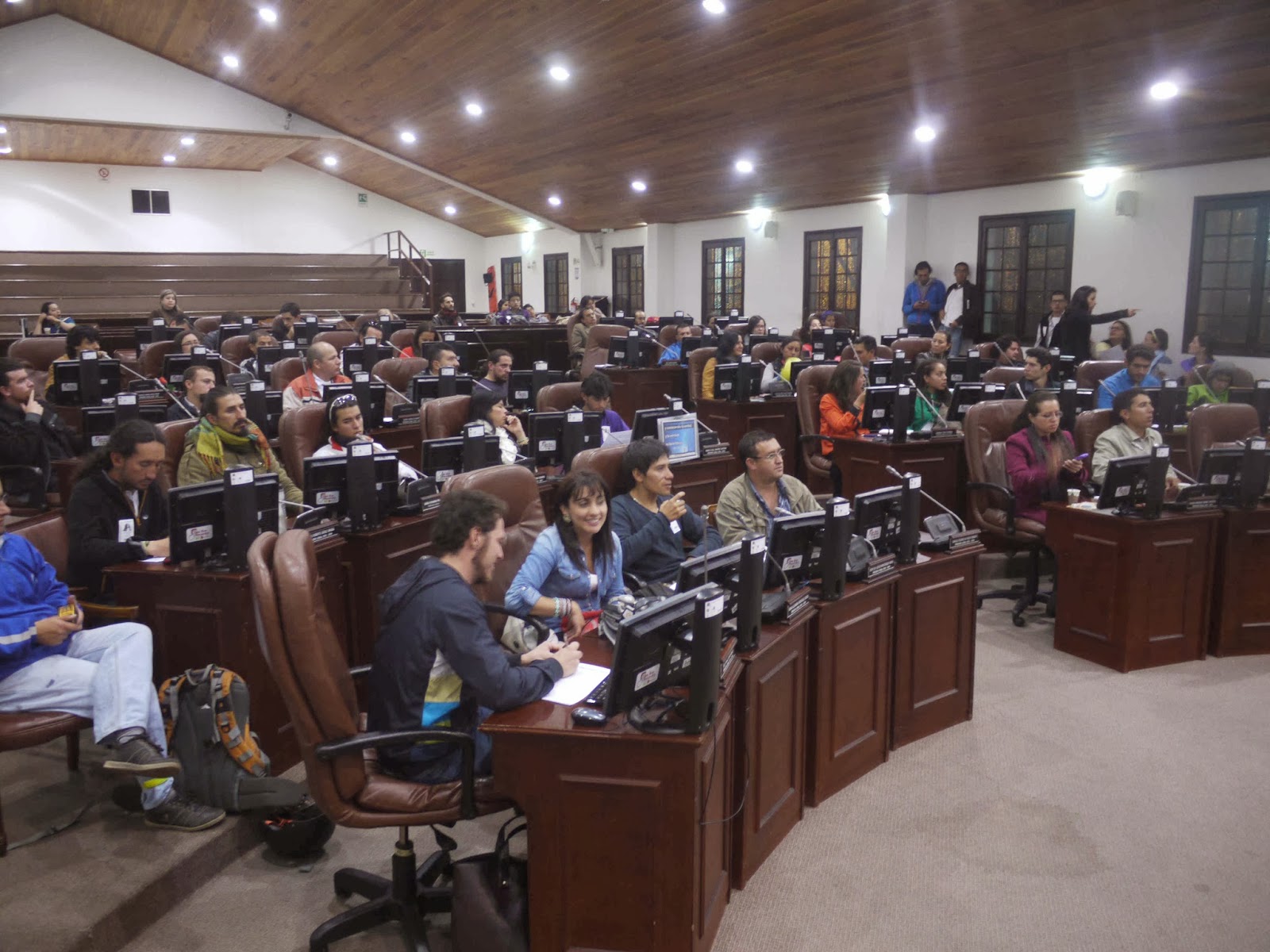 London and New York City have them. And so do Madison, Wisconsin; Thousand Oaks, California; San Diego, California and many other cities - but not Bogotá, despite its reputation as an urban bicycling pioneer.

But may come soon. At a meeting Friday evening in the Bogotá City Council building, councilman Roberto Saenz proposed the idea of creating a city 'bicycle office.'

But, what such an office would be called or do, and what authority it would have, aren't clear.

Several attendees at the event urged that the office not be 'just about infrastructure,' which is a good point. Also, that it be made to last, rather than just for this mayoralty, whose weeks may be numbered.

For the sake of cyclists, the mission of such an office should be defined early - and in our favor. After all, a 'bicycle office' could be about, instead of promoting cycling, sanctioning cyclists. Or counting them. Or restricting and regulating them 'for their own good.'

Would this office possess its own real authority or only be a conduit which would have to go, hat in hand, appealing to other city offices for resources and support?

But, as long as it stays positive, a bicycle office could be a good thing just by existing, since it would provide bikes and cyclists with attention and importance.

Meeting attendees also discussed the problem of bicycle theft. If the Dutch haven't eliminated bike theft, I don't expect Bogotá to, either. However, there are basic measures the police could take - but, infuriatingly, don't - to reduce the impunity, at least a bit. One would be to control or shut down the shops, in areas such as the Santa Fe neighborhood, which everybody knows deal in stolen bikes. Another would be to equip a nice bike with a hidden GPS tracker, let it get stolen, and then follow it to the place where gangs steal or fence their goods. 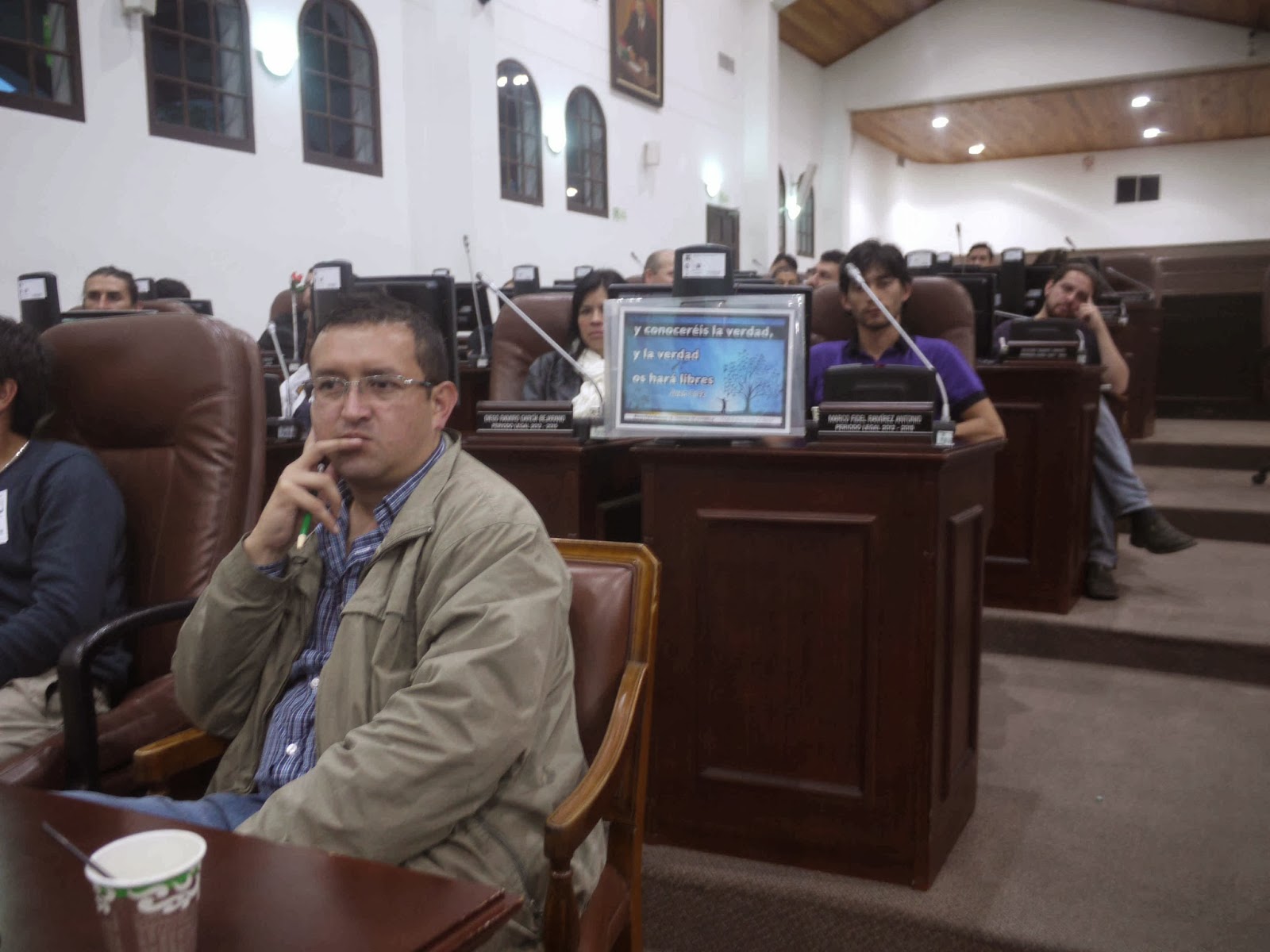 Bikes and Buses - Can They Cohabit?

Bogotá transit planners' latest scheme to reorganize Bogotá's transit is to create exclusive lanes shared by buses and bicycles. It's actually a good idea in principle - particularly for the bus riders, who could be freed from the traffic jams generated by all those single-passengers cars.

But can bicyclists and buses co-exist? Would bus drivers respect cyclists? Would cyclists exasperate bus drivers by darting in front of them? Would bicyclists get blasted by buses' exhaust?

Most importantly of all, tho, would the plan work at all? I doubt it. Unless the city invests in TransMilenio-type concrete barriers separating these new bus lanes from the rest of the traffic, will car drivers respect them? Unfortunately, I doubt it.

This sounds like yet another fantasy plan from the Petro administration, which seems convinced that human nature is so benevolent and unselfish that a few billboards and pamphlets handed out in the street are all it takes to reform human nature.

On the other hand, in the one place where buses and bikes share an avenue free of cars - on Ave. Jimenez in La Candelaria, it works pretty well and is used by many cyclists.

Many of the city's existing bike lanes are on sidewalks, forcing cyclists to dodge pedestrians, forklifts and delivery vehicles. Cars park on the lanes and businesses use them to store and display products.

But, where they feel safe and have their own space, cyclists will come, as the car-free stretch of Ave. Septima has demonstrated. Bogotá needs to invest in real, protected and continuous corridors for cyclists. That won't be easy, but it's a necessary step for promoting cycling here. 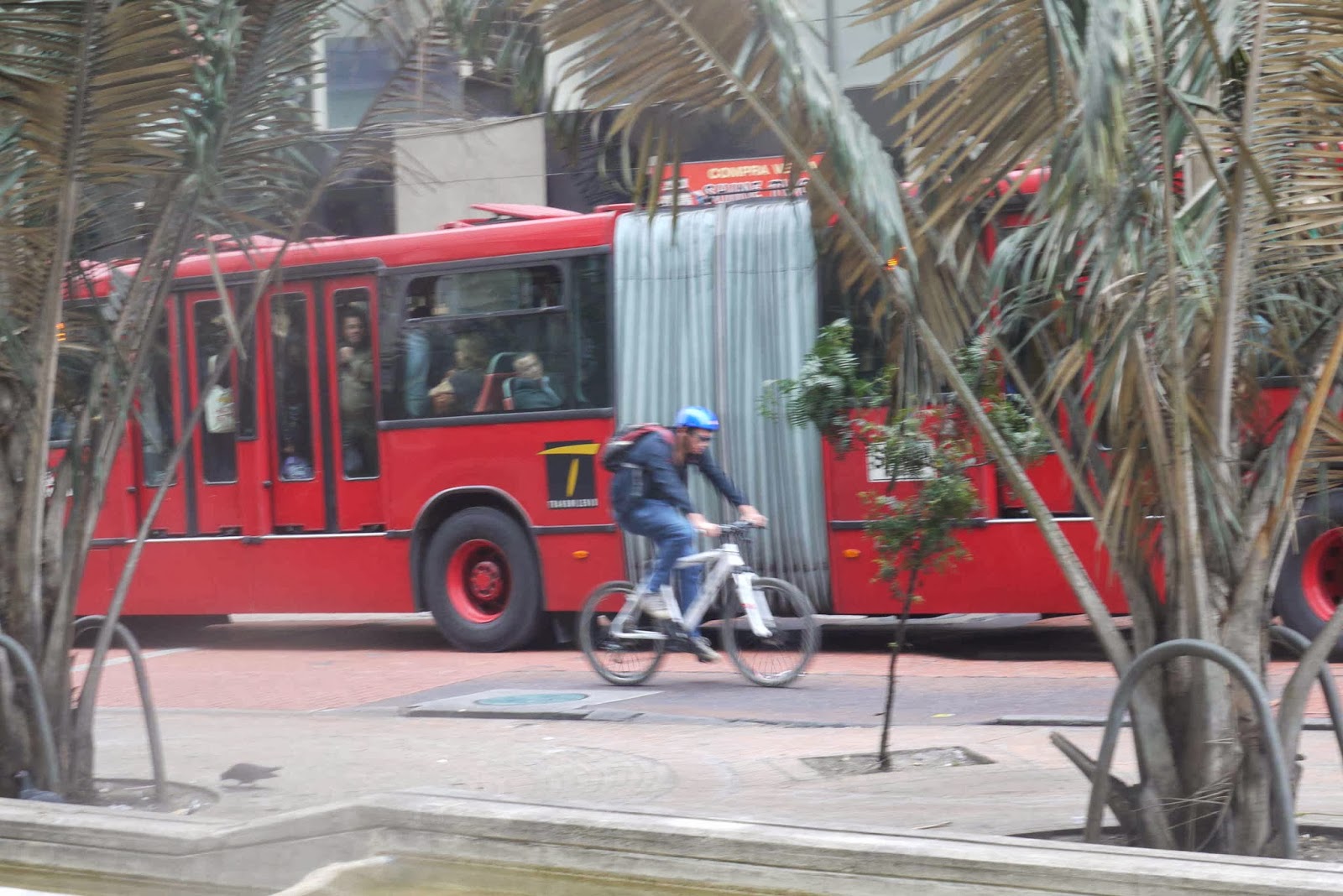 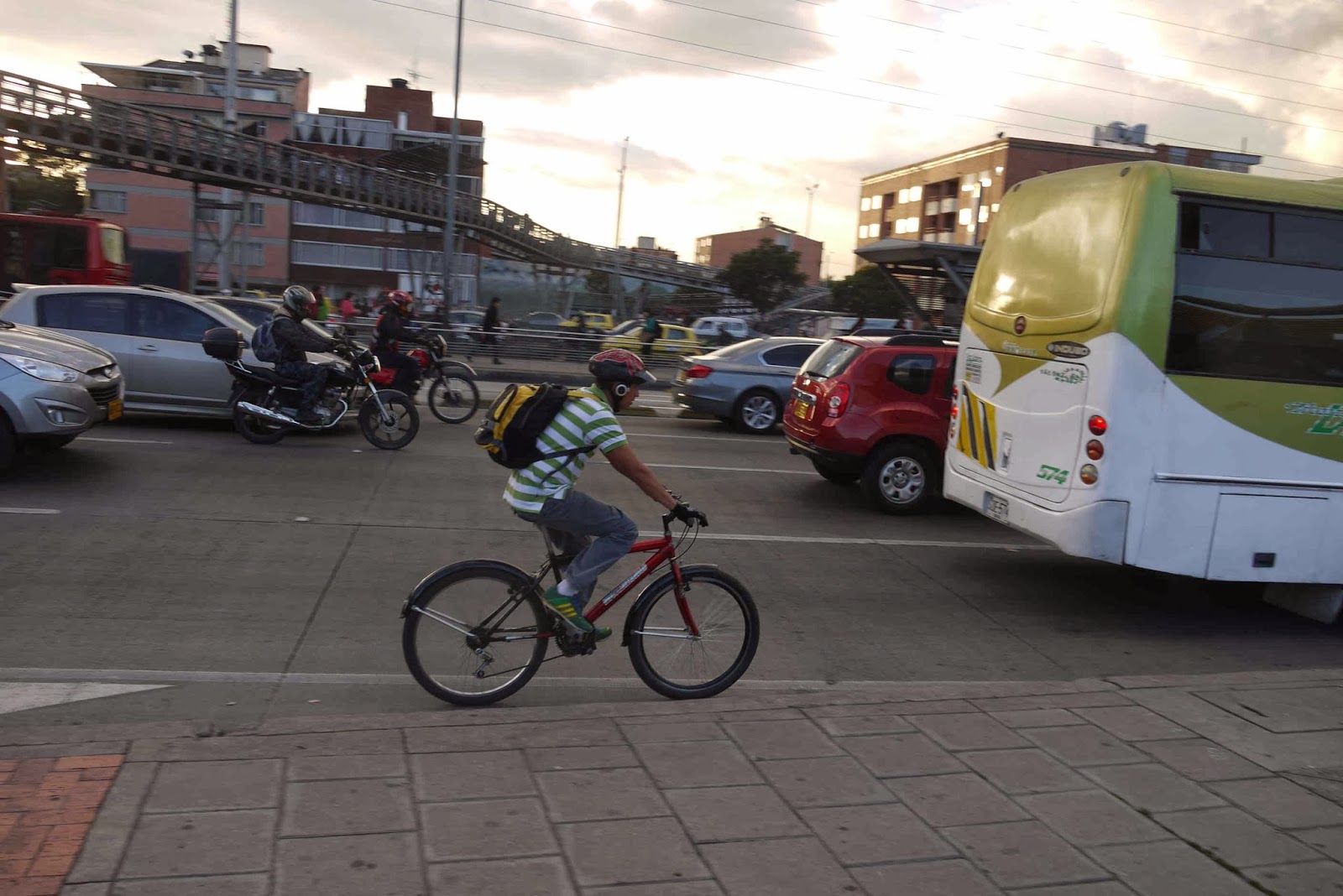 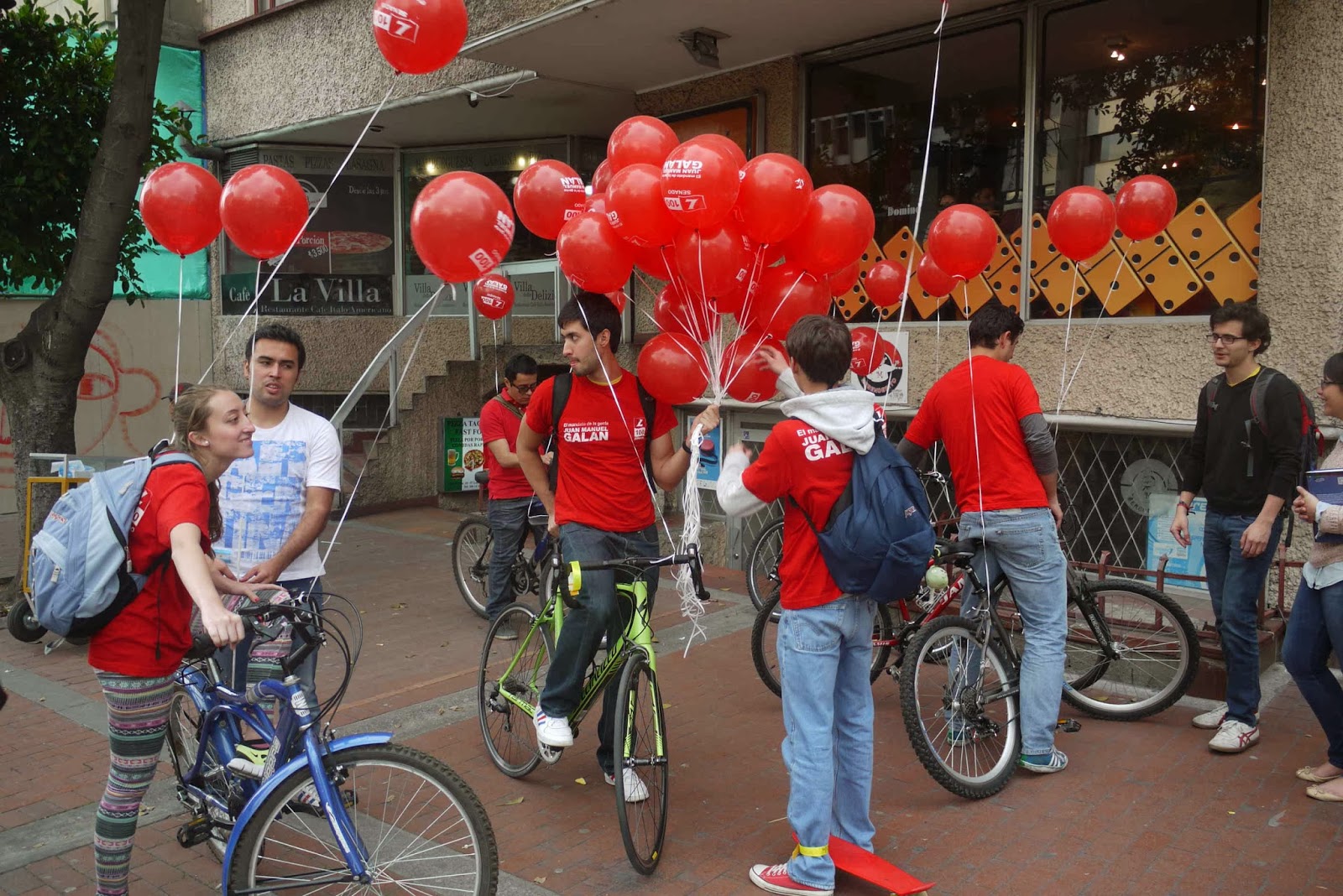 However, the very next day, these Liberal Party campaigers (albeit for different candidates) marched down Ave. Septima wearing shirts demanding a "fair price" for gasoline. The shirts showed a customer being held up with a gasoline pump nozzle wielded like a pistol.

Cheaper gasoline promotes more driving, pollution, traffic congestion and sedentarism - all of which are bad for bicyclists, of course.

Subsidizing gasoline is also a give-away primarily to the wealthier clases, who own big cars, while the poor walk, bike or take the bus. Money spent - or taxes lost - on gasoline also means less resources for schools, police and public hospitals.

Why are gasoline prices such a populist issue? Venezuela's 'revolutionary, socialist' presidents, who love to criticize the United States for consumerism and wastefulness, subsidize gasoline there to just a few cents per gallon. Why don't I ever see marchers demanding lower prices on bread, carrots, books or potatoes? 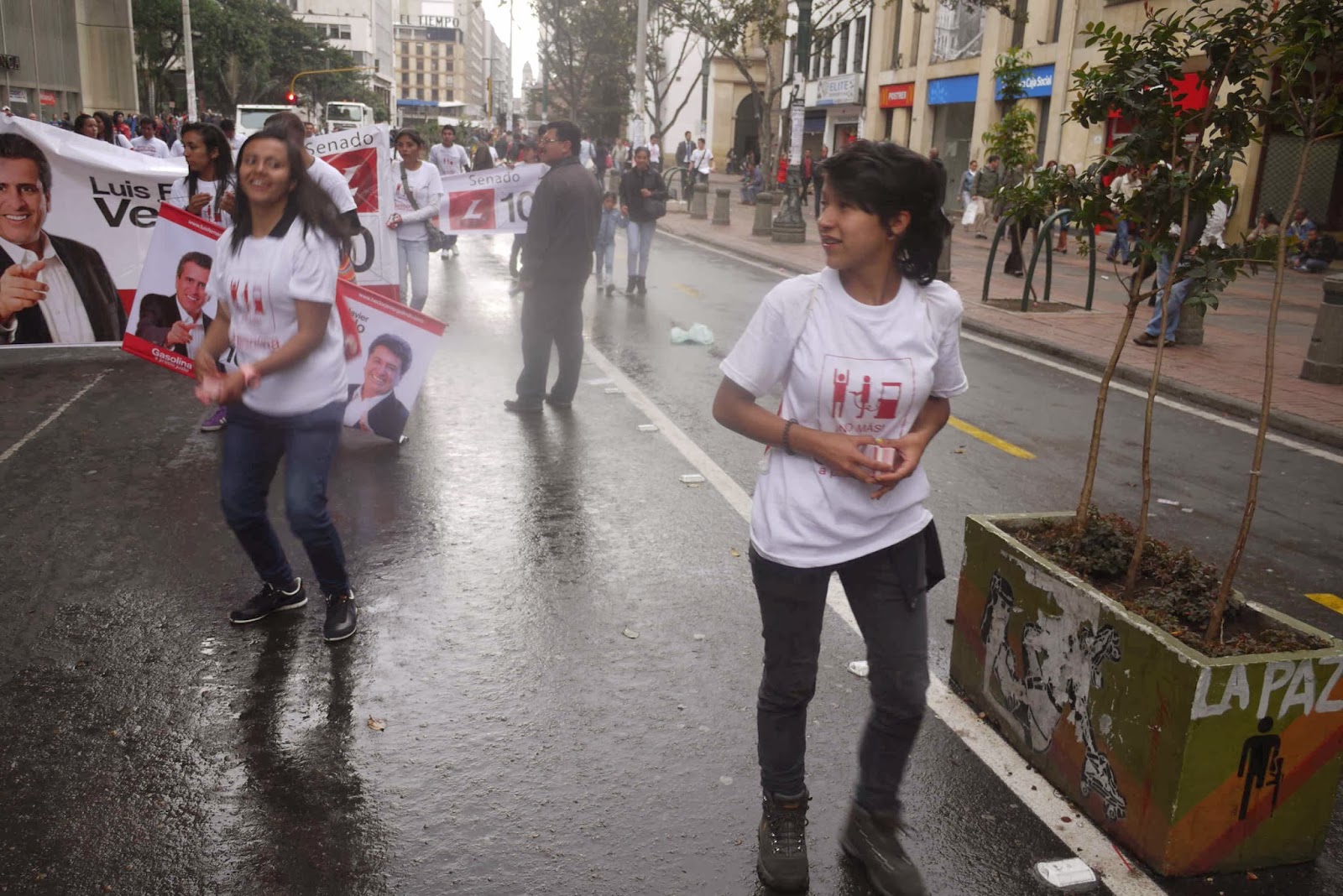 
On Car-Free Day, the Petro administration did much more for cyclists than have other mayors have, creating a temporary bike lane down Ave. Septima and turning Calle 26 into a weekday Ciclovia. And, I saw many more cyclists than normal.

Car-Free Day is supposed to spur Bogotanos to change their transit ways. How many of those who dusted off their bikes today will continue using them?

Bogotá environmental officials reported that the number of cyclists sextupled today. I'd take that statistic with a grain of salt, but our numbers did rise.

Air quality also improved. Ozone, nitrous dioxide and carbon monoxide levels all dropped - but the concentration of suspended microparticles was actually higher than normal in the morning, but dropped to normal in the afternoon.