Suddenly, it seems, the start of Transmilenio construction on Seventh Ave., scheduled for Dec. 28, is almost upon us - and we still don't know what that means for La Ciclovía's most important section.

La Ciclovia is of course a Bogotá tradition and has been imitated (but never equaled) by many cities across North and South America. Of the hundreds of kilometers of streets which are closed to cars on Sundays and holidays, Seventh Ave. is by far the most important due to its popularity with users and because it passes many of the capital's most important historical and political landmarks, as well as parks and neighborhoods.

La Ciclovía is a big part of the reason why Bogotá is sometimes (mistakenly) ranked as one of the world's most bike-friendly cities.

However, La Ciclovia's most important section of  is now endangered by plans to expand the city's Transmilenio express bus system along Seventh. The Ciclovia route on 26th Street, which goes to the airport, was erased a year ago when the city began work on a TM line along that avenue. (Work there continues, apparently interminably, over budget and waaaay behind schedule.)

We don't object to TM expansion - today Seventh Ave. is chaotic and polluted. But we don't want to see this Bogotá tradition mortally wounded. Disappearance of Seventh Avenue's Ciclovia would not only hurt businesses like Bogotá Bike Tours, it would also deprive many thousands of bogotanos of their Sunday recreation and cut the incomes of the hundreds of mainly poor people who sell food and repair bicycles along Seventh Ave. every Sunday and Holiday.

We defenders of La Ciclovía are demanding that officials designate an alternate route during construction and that La Ciclovía return to its most important corridor once construction is completed.

La Ciclovía's defenders are planning a big march Nov. 14, Day of the Bicycle, from the National Park to Bolivar Square, demanding that La Ciclovía de la Septima be saved!!! Read more at: www.lacicloviaserespeta.com

Finally!!! You Can Park Your Bike!

The squeaky wheel does get the grease, at least sometimes. In a sort of landmark for Bogotá cyclists, following recent protests. The bicycle parking buildings built years ago in the Puntos de Encuento at four Transmilenio stations are finally open to receive bicycles. Now, let the cyclists come!

The parking lots are located in the Alcala (Autopista Norte and 138th St.), Las Aguas (Eje Ambiental and 18th St.), Mundo Aventura (Ave. Americas and Boyacá) and the Tintal (Ciudad de Cali Ave. and Americas Ave.) TM stations. They're open from 7 a.m. to 6 p.m. weekdays and 8 to 5 on Saturdays.

The service is free. Just bring your bike, cedula and your lock.

But we'll see how long it lasts. The city is looking for private businesspeople to run the parking facilities. But it's hard to see how anybody could pay rent and actually make money operating the things. Today, I visited the one in Las Aguas and the guard told me that only a few people a day were leaving bikes there, altho, hopefully, those numbers will improve.

The city needs to publicize the service and remember that cycling is a public benefit deserving public subsidies, because it reduces traffic congestion and pollution and improves people's health. 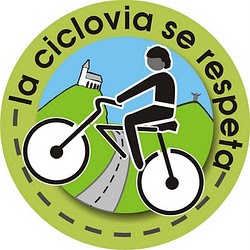 Finally, someone with a bit of economic (and apparently political) pull has pitched in in defense of La Ciclovia de la Septima.  http://www.lacicloviaserespeta.com/     The campaign is being led by Angelica Lozano, ex-mayor of the Chapinero neighboood.

La Septima, or Seventh Avenue, is the most important section of La Ciclovia, and passes by many of the city's most important landmarks. However, the city plans to expand the Transmilenio express bus system along Seventh. The Ciclovia's 26th St. branch already disappeared for the construction of Transmilenio on that street - without any public consultation or legal process. We don't want the same to happen on Seventh Ave.

With construction set to start perhaps as early as November, let's hope it's not too late.

The organization apparently consists of residents of neighborhoods like Chapinero and others along La Ciclovia.

Bogotá Bike Week Wraps us with a Ride 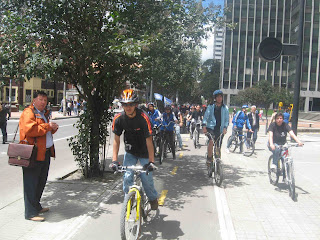 Bogotá Bike Week wrapped up today with a one of the biggest bike rides seen in Bogotá outside of La Ciclovia and about the closest this city's come to a Critical Mass ride. It was a nice celebration of the elegance of cycling, especially when we pedaled past traffic jams, and hopefully brought some attention to cyclists.

Sadly, for this cyclist, the ride made plain many of the things which can make cycling here so difficult. We passed congested streets, old smog-trailing buses and along ciclorutas where we had to dodge pedestrians. On the way to the ride, Juan and I had passed several cars parked unmolested on sidewalks....And then there's that pedantic, compulsive unreasonable rulemaking for the sake of rulemaking. The ride ended at the Universidad Jorge Tadeo Lozano - which must have a student body in the thousands - and I was told has a bike rack with spaces for only 20 bicycles, as well as a requirement that users sign up at the beginning of the semester to use the rack.


What possible rationality could there be behind that?

This blog written by Mike Ceaser of Bogotá Bike Tours

A Funeral for Bicycle Week

Bogotá's Bicycle Week (schedule here) kicked off on Monday with a downer - a funeral. But maybe the episode should be better called a stillbirth.

In 2006, if my memory serves, Bogotá built four 'Meeting points' at Transmilenio stations, each including public bathrooms, vendors' kiosks and a bicycle parking facility. The reason for the name seems lost to history, but the goal was admirable: to generate more activity around the stations, provide badly-needed public bathrooms and encourage clean transport to TM stations. The bicycle parking buildings are large and sophisticated, despite some basic engineering faults (like constructing the walls out of wooden slats, which let rain in, and installing a sophisticated and expensive elevator, that is sure to fail after a few months).

Incomprehensibly, however, four years later the expensive parking facility by Las Aguas station, near La Candelaria, has never opened. That tragic fact was commemorated with the funeral held by members of Bogotá's Mesa de la Bicicleta, a city advisory group on cycling issues.

Each time I've spoken to the parking lot's security guards they've assured me that the facility would open in six months or at the beginning of the next year, which has never happened. The latest explanation is that they're waiting for expansion work to finish on the adjoining TM line. That makes no sense, since the TM line has never halted operations.

The most consistent explanation I've heard about why the parking facility's never opened is that the city wants someone to agree to operate it - something only Bill Gates might do, since it's unlikely to make a profit. That demonstrates a

fundamental misconception about bicycle parking facilities. Naturally, they don't generate profits themselves. But they benefit the city by encouraging cycling and therefore reducing the much greater costs in noise, pollution, congestion, infrastructure demands and other huge costs and quality of life impacts created by cars.

In addition to the funeral, this year's Bicycle Week also includes conferences, group rides and other events.

Bicycle Week 2010 comes, unfortunately, at a difficult time for cycling in Bogotá, when City Hall appears to give cycling little importance, the city's Ciclorutas are falling apart and congestion, pollution and traffic chaos make biking this city a real challenge.