Understandably, this year's Bogotá Bike Week is paying lots of attention to the problem of cyclist fatalities. After all, just recently two Bogotá bicyclists were killed by accidents on two consecutive days. And so far in 2017, some 45 cyclists have died on Bogotá streets. In contrast, in New York, which has about the same population and also a public bicycles program, about 15 cyclists die each year.

I'm writing this from northern California, where I'm visiting my
parents in a suburb east of San Francisco. Bicycling around here makes starkly clear how Bogotá falls short of being a cyclist-friendly city. Unfortunately, the improvements it needs aren't easy.

Safe, pleasant, useable bike lanes: Bogotá has some of these, and the city is improving. But many Bogotá bike lanes are merely lines painted on sidewalks, where cyclists must dodge around pedestrians, delivery drivers and cars. Other bike lanes have potholes or are blocked by signposts.

In contrast, in northern California, most bike lanes are wide, well-maintained and on streets, where
they actually take space away from cars.

Cautious, courteous drivers: Unfortunately, many Bogotá motorists behave as tho they are the only ones with any rights. That's why you see pedestrians waiting interminably at crosswalks.

(When I block the cars to give an old lady a chance to cross, motorists insult me for it.)

Cycling across an intersection often becomes a game of chicken with drivers who run red lights or
ignore stop signs and believe that neither laws nor common decency apply to them.

In contrast, here in the Bay Area when I even APPROACH an intersection drivers stop. Is something wrong? I wonder. No, they're waiting for me to cross. Is this out of courtesy, or because they're terrified of getting sued? Does it matter?

Of course, cyclists violate lots of traffic rules. But the general atmosphere of chaos and lack of civility on Bogotá streets makes a cyclist shake his shoulders and ask 'Why obey rules, if nobody else does?'

Breathable air: In Bogotá, every time a bus, van or truck passes me, I hold my breath, half expecting to be blasted with diesel smoke. In Bogotá, even many cars belch fumes because they lack a catalytic converter or filters. As any Bogotano knows, in a congested spot, you can literally TASTE the air pollution.

Besides the obvious health impacts, this just makes bicycling unpleasant. In California, which has some of the world's strictest emissions laws, even in congested areas I barely sense fumes at all.

The first of these problems requires an engineering fix, and city planners appear to be improving: All the new bike lanes I've seen are on streets.

But the other two issues involve culture, which is tougher to change. Perhaps less apathetic (and less
corrupt) transit police could help, as might public relations campaigns. But as long as the every-man-for-himmself credo rules, cycling, driving and walking Bogotá's streets will be dangerous and frustrating.

Yet, for all that, Bogotá has many more cycle commuters than do northern California's suburbs - and perhaps even more than does bike-friendly San Francisco.

That's why I'm becoming convinced that making cycling pleasant and making it popular are two very different - but related - issues. Fixing these troubles will lure onto two wheels only those people who already would like to bicycle, but are afraid to. To get more people to WANT to cycle will require  more fundamental social changes.

For the hundredth time, Bogotá is planning a public bicycle system.

The last one, bidded out by Mayor Petro to a consortium consisting of a Colombian man with a history of corruption problems, and a Chinese company - neither of which had experience with bicycles - died a quiet and deserved death.

That plan also absurdly required the bicycle scheme to pay profits to the city. Around the world, even in cities much wealthier and with much more tourism than Bogotá, such bicycle systems either receive public subsidies or have deep-pocketed corporate sponsors.

Now, Bogotá Mayor Peñalosa plans to try again. And this time the bikes will not be required to pay the city - but neither are they to receive public monies.

Motor vehicles burn subsidized fuel and often get free parking - which all of us pay for. And all of us pay the costs' of vehicle pollution's health and environmental impacts.

Bicyclists, on the other hand, don't pollute, occupy little space and benefit people's health. But in Bogotá, bicycles don't receive those subsidies.

Around the world, public bikes are seen as a benefit because they reduce pollution and traffic congestion and improve citizens' health. So, why does Bogotá see bikes as a business and expect them to pay for themselves?

Unfortunately, in a city like Bogotá with lots of poverty and relatively few tourists and deep-pocketed tourists, a public bicycle system is unlikely to survive on its own economics.

When will Bogotá, with its ambitions of being a cycling mecca, put its money where its mouth is?

Quite a Tragedy! (For Motorists)

During the last two days, two bicyclists have been killed violently in traffic on the streets of Bogotá, altho who's at fault is not clear.

But if you read about this tragedy on Caracol's website, you could be forgiven for thinking that its most important consequence was the inconvenience to drivers.

El Tiempo's story gives a few more details about one killing, in La Calera. The car reportedly had mechanical problems, and the driver lost control.

Will anybody be prosecuted for this killing? Or will the motorist whose deadly irresponsibility killed this cyclist be considered a victim and let off with a symbolic punishment, as usually happens to murderous drunk drivers?

Mayor Peñalosa has created a number of new bike lanes - some better than others,

Carrera 13 bike lane with a full-scale lane on Carrera Septima, complete even with tiny and annoying speed bumps.

Other lanes are being phased in, with heavy plastic barriers marking their paths until something concrete is installed.

While bike lanes mean more riders, they also generate complaints from drivers, who feel deprived of road space they believe belongs to them. Yet, from what I've seen, these proposed lanes are on quieter streets where the space won't be missed. And grumbling drivers ought to imagine how much worse congestion would be if each of those cyclists were instead driving a car.

And Bogotá's bike lanes get little respect:
And the provisional lanes even less respect: 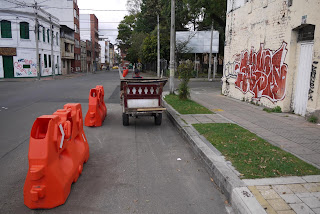 A glance at Bogotá's traffic congestion shows that it's not the fault of bicycles or bike lanes: