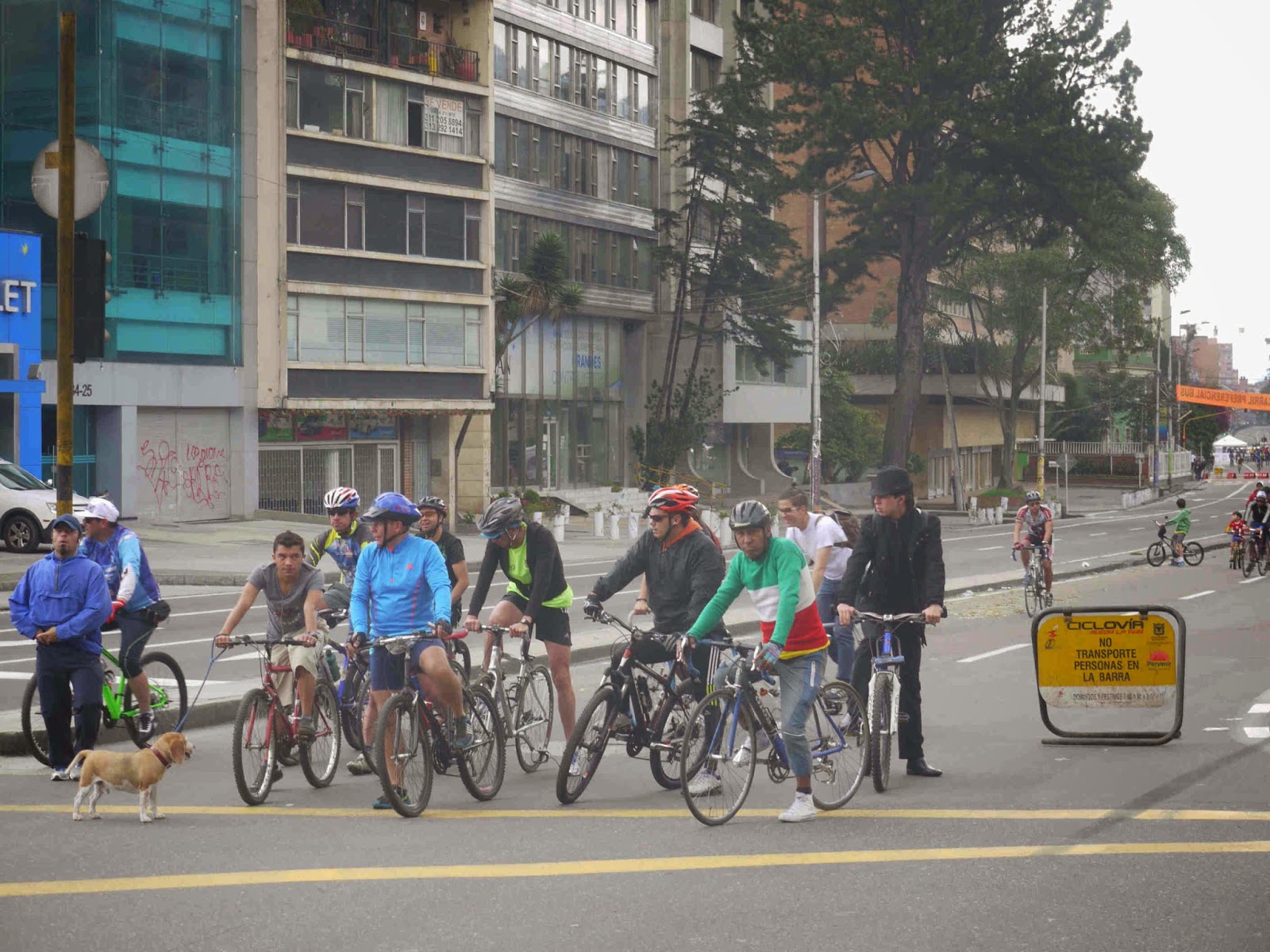 La Ciclovía is celebrating its 40th anniversary these days: Four decades, during which it has become a Bogotá institution, given the city international fame and spread to cities across the Americas and beyond.

According to today's El Tiempo, La Ciclovia started with a  few kilometers of closed streets around carreras Septima and Trece. I've heard other origin accounts, and the truth may never be known at all or may be a combination of several stories.

Today, Bogotá's Ciclovia extends over 121 kilometers and attracts some 1.4 million participants every Sunday on bikes, feet and skates. It's often called 'the wordl's longest beach.' 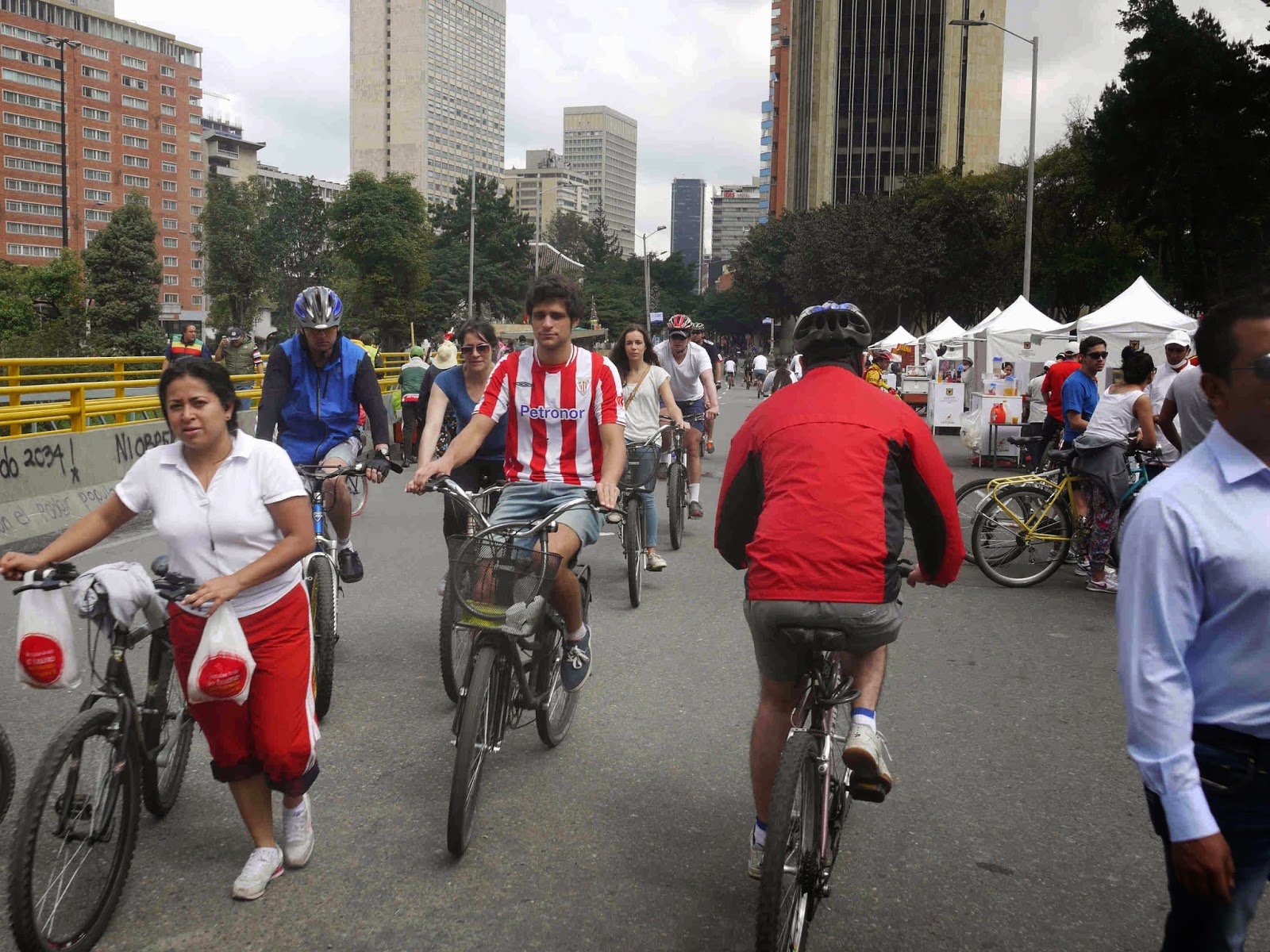 La Ciclovia is a great institution. It's not only fun, but healthful, and it's just great watching all those people enjoying something healthful - a rarity for the human species.

But La Ciclovia's success and obvious benefits have prevented it from gaining enemies. In 1976 and '82 La Ciclovia's existence was formalized by decrees. Yet, during the '90s it shrunk to only 21 kms, and nearly disappeared completely, according to El Tiempo. Several years ago, a congressman who didn't like being inconvenienced while driving his car introduced a bill shifting La Ciclovia's hours from the current 7 a.m. to 2 p.m. to 5 a.m. to noon. Cyclists, common citizens and public officials past and present spoke against the idea, which died for lack of support.

Today, there are Ciclovia-like events in Medellin; Caracas, Venezuela; Santiago, Chile; Quito, Ecuador; Mexico City, and in several cities in the United States and even India. But few other cities carry out the event on such a grand scale and so frequently as Bogotá does.

Now, if only the great turnout on La Ciclovía would translate into massive bicycle use the other days of the week. 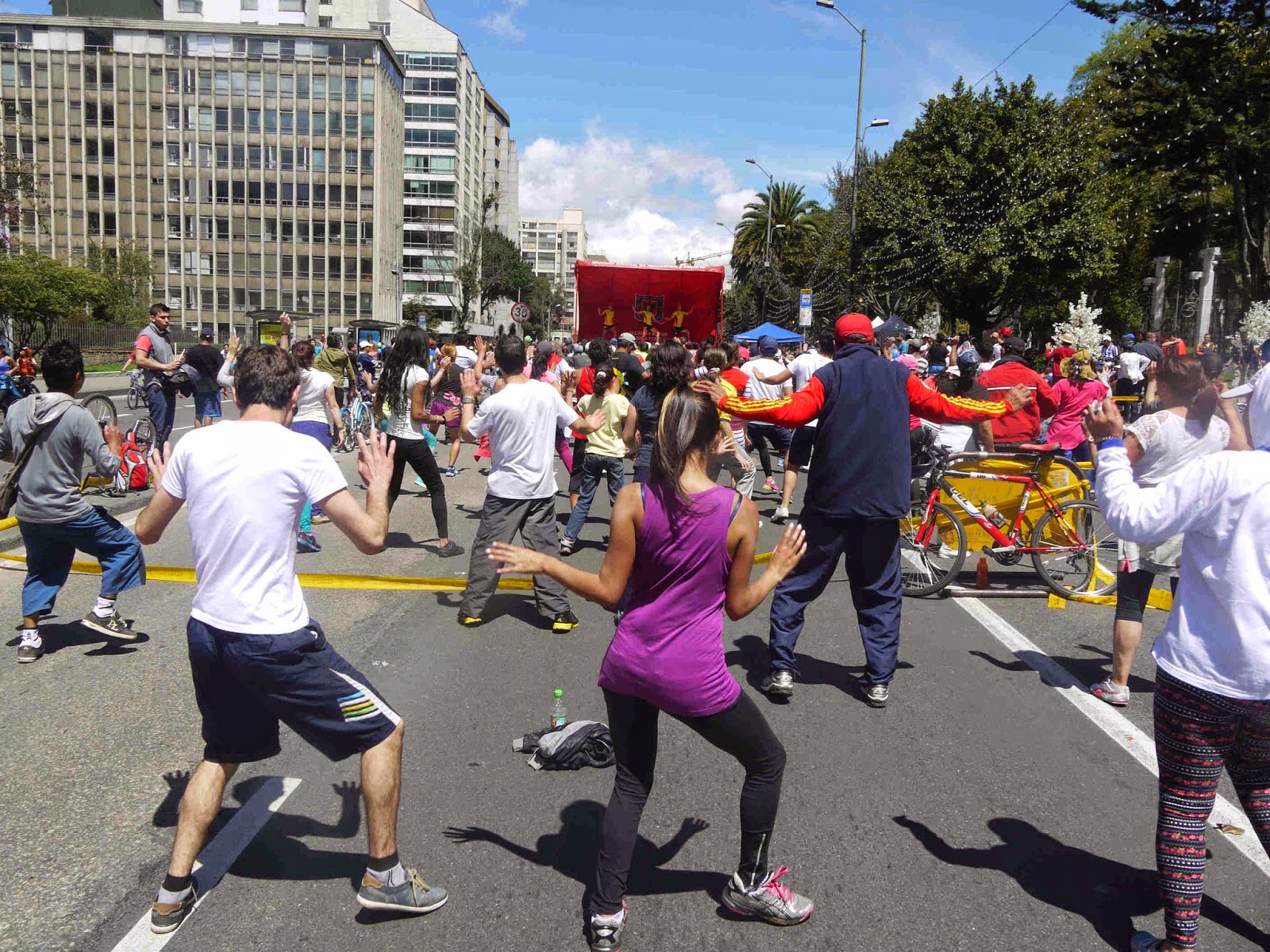 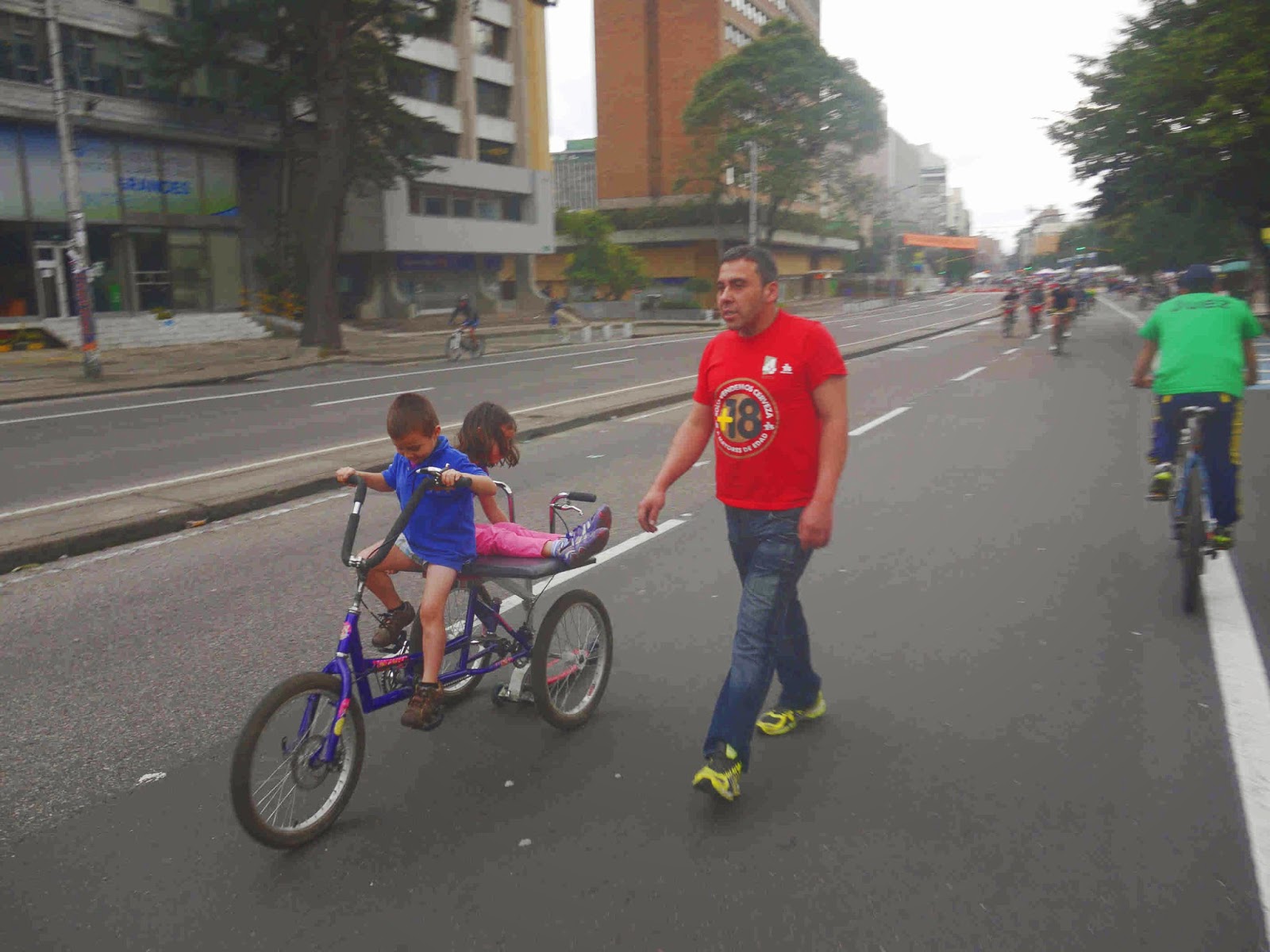 Usually, Bogotá's annual Ciclovía Nocturna, or Nocturnal Ciclovía, is anything but, at least in the city centre, as Ave. Septima gets so packed with pedestrians that one can hardly walk a bike, much less ride one.

But this year, they routed La Ciclovía along Carrera 6 in La Candelaria, making pedaling possible. 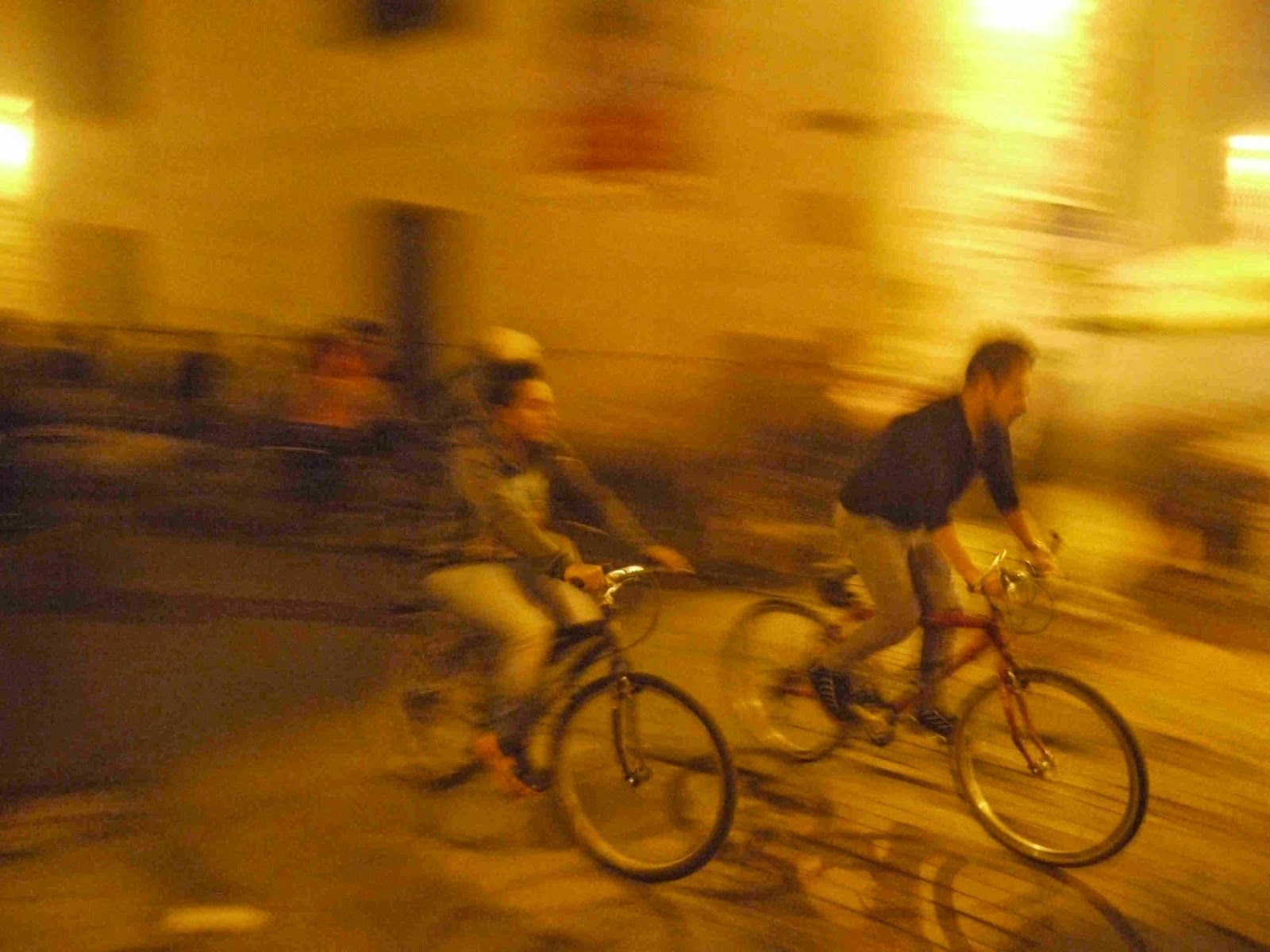 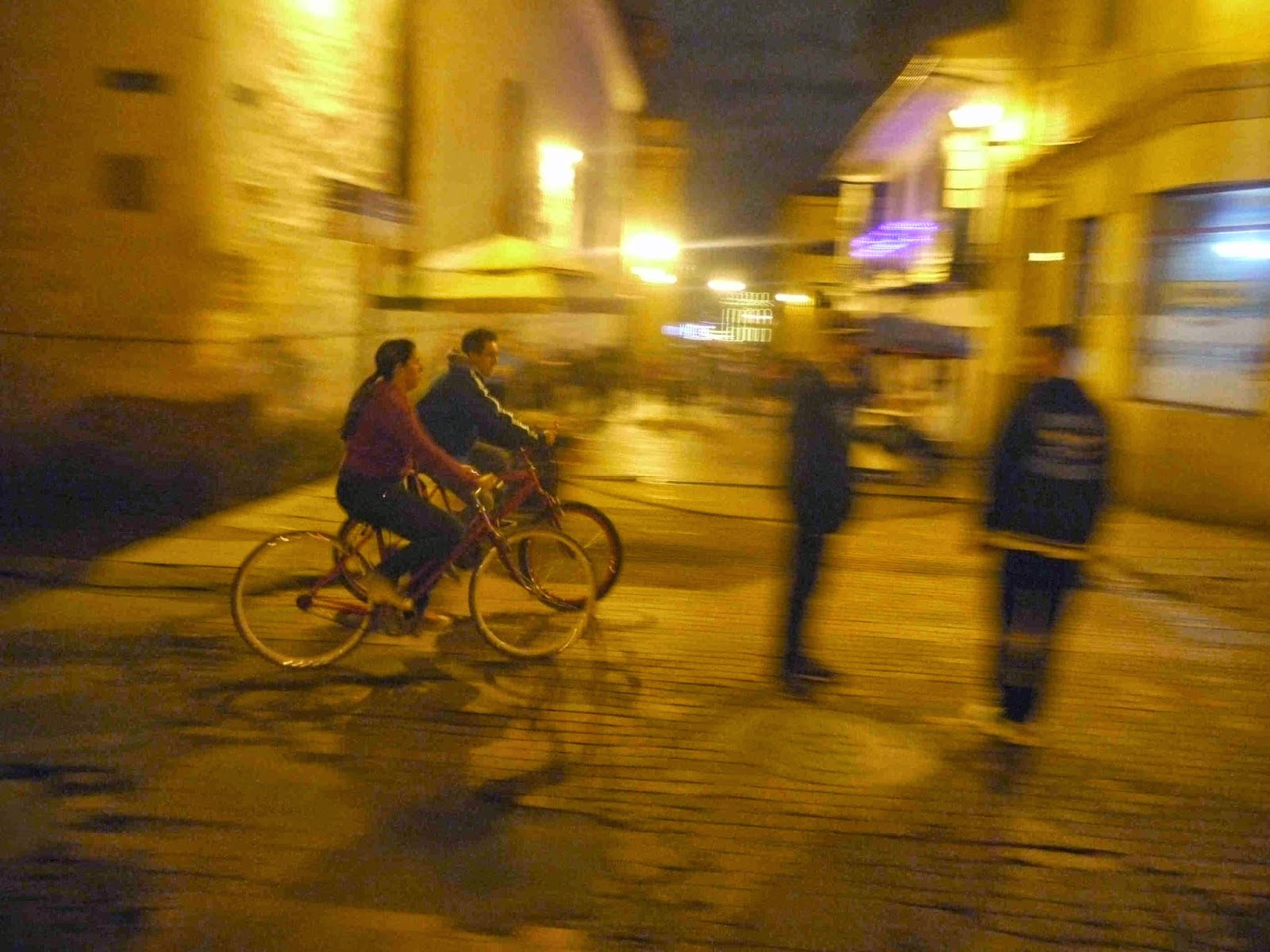 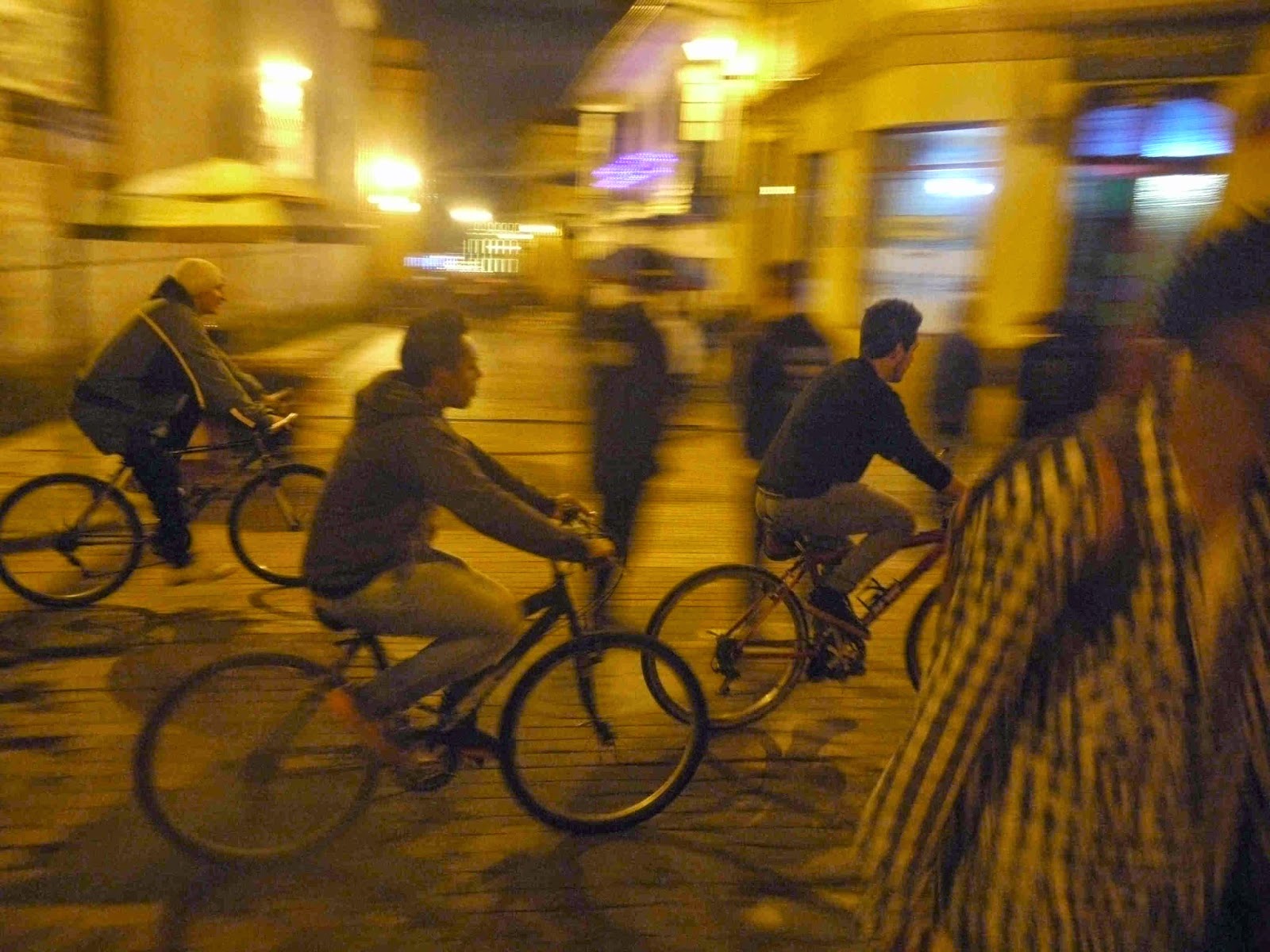 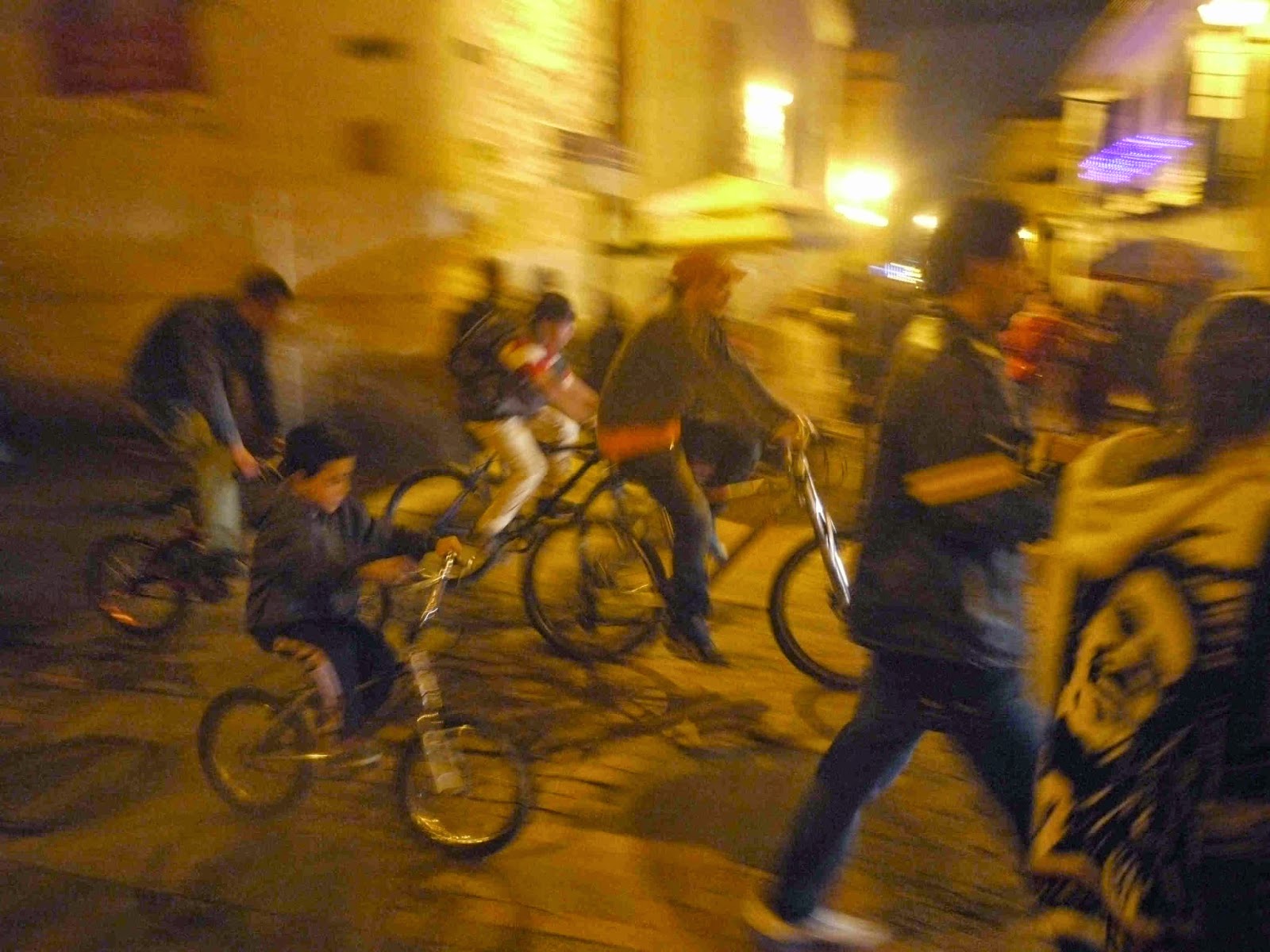 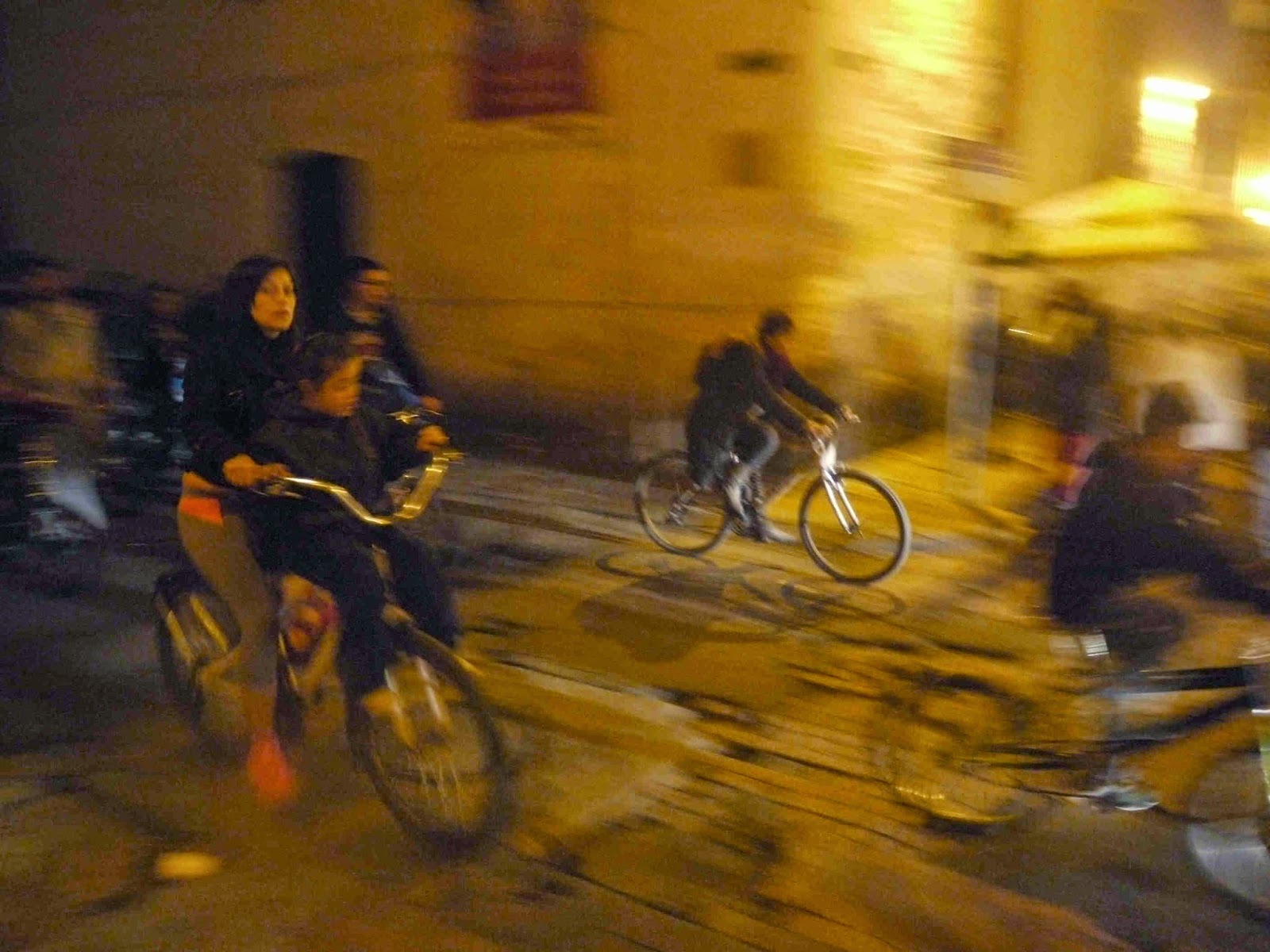 
When it comes to cycling, Udaya Raja and his buddies think big - really big. So big, in fact, that they build some of the tallest bikes in the world.

Udaya is in Bogotá this week on his hand-made bike, whose seat rises 5 1/2 feet high, to tour across parts of Colombia, observing how the people react.

"People are ecstatic, confused and surprised, especially motorists," Udaya said of common reactions. "They're just generally happy that someone's made something so interesting."

Udaya, 32, built the bike himself back in Los Angeles, California under the guidance of his friend Adrian Machado, out of a steel Trek bicycle frame. It took a month of work and cost close to $700.00, altho that was in part because of some special parts, such as a classic leather Brooks seat. The bike weighs about 40 pounds, and when touring Udaya carries another 70 pounds of baggage.

Back home, Udaya hangs out with a group of 'freak' bike users, some of whose cycles dwarf his own. His friend Richie Trimble's bike's seat sits almost 20 feet high, making it perhaps the Earth's tallest bicycle. See it here.

Udaya came to Colombia, despite its sketchy reputation, because he'd already traveled thru Central America down to Panama. His may be the most exotic tall bike tour, at least for a Southern Californian. He bought a one-way ticket to Bogotá, so his stay is open-ended.

"I'm gonna take it day by day, until I run out of zest for traveling," he says.

Udaya's friend Bobby Gadda rode his own tall bike from Vancouver, Canada, to Los Angeles, and talks about the wonders of tall bike touring here. 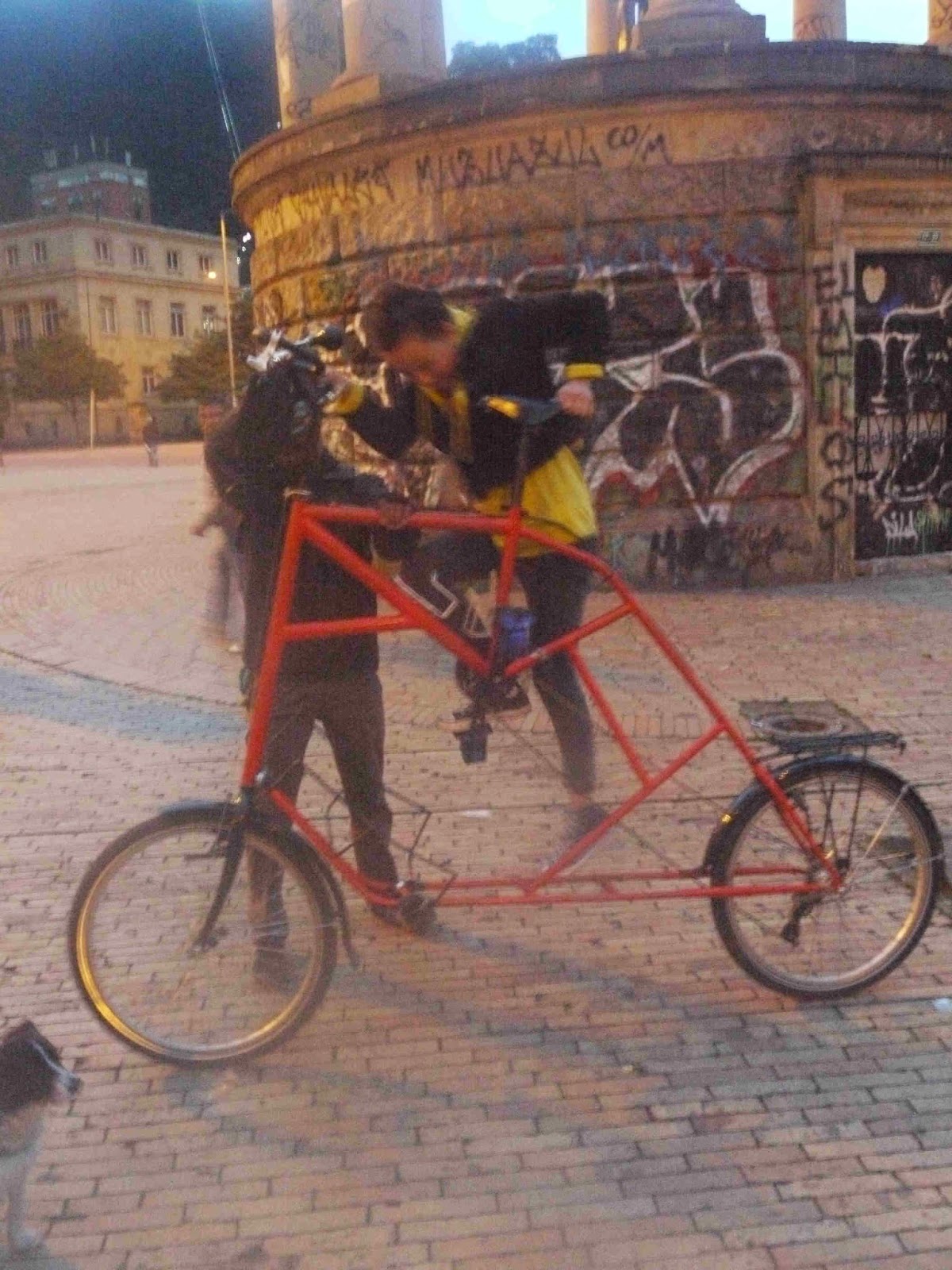 Udaya, who back home worked as a cameraman and then for the Hulu movie streaming company, cycled in Bogotá's Ciclovia this Sunday. In fact, his friend Gadda brought Ciclovia to Los Angeles, where it's called CicLAvia and happens a few Sundays each year.

In the Colombian countryside Udaya expects to ride six to seven hours per day, covering about 50 kilometers.

"This thing is geared really low," he says. "But sometimes I have to get off and push it, and then it's gonna be really slow."

That could happen a lot with Colombia's big climbs and high altitudes.

On the other hand, Udaya doesn't plan to push his luck.

"If things really get too unsafe, I'll just put the bike on a truck and start again where it is safe," he says. "People see me on this bike and think I'm out to do something crazy, but really I'm not." 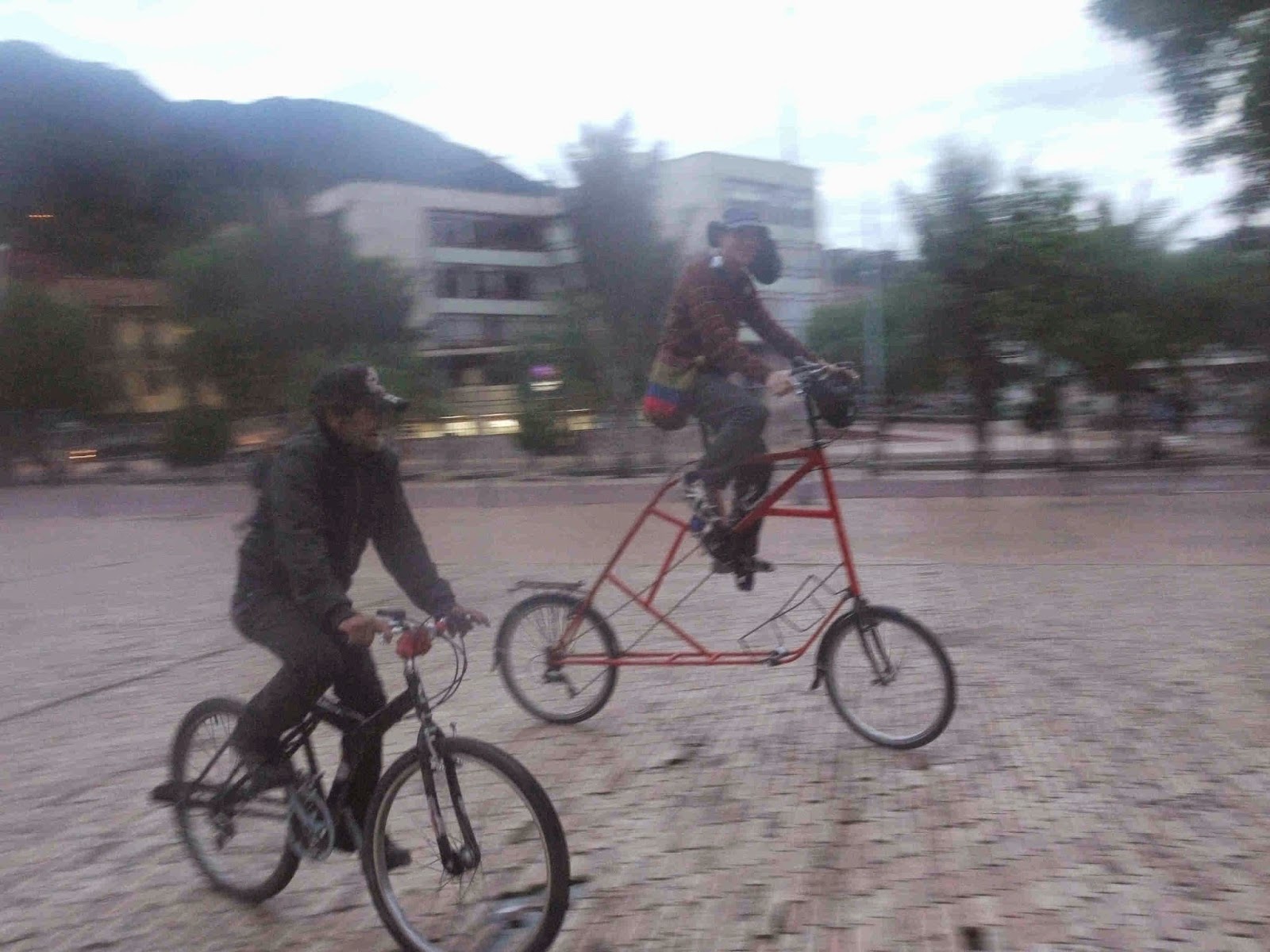 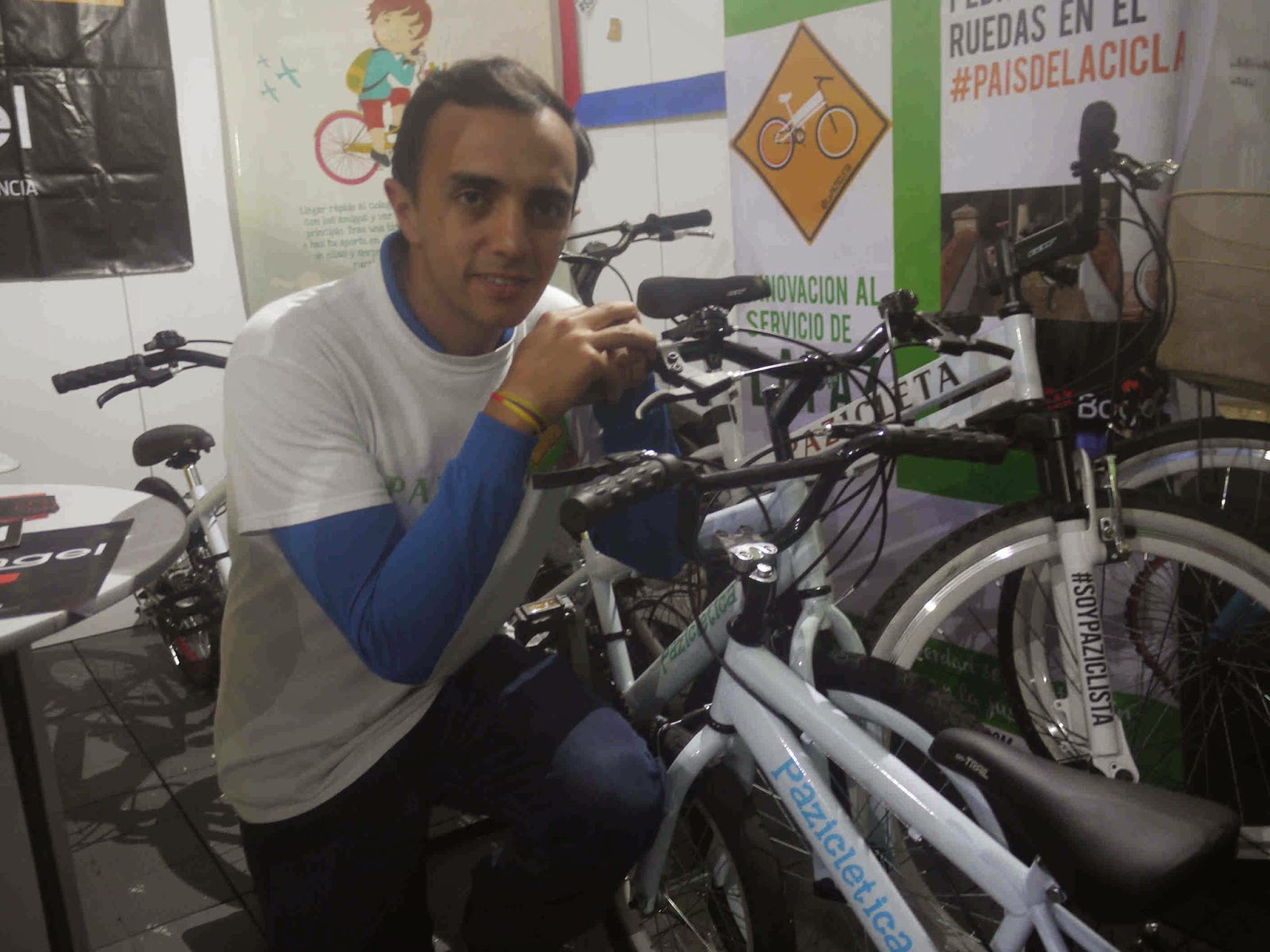 A year ago Cesár Salamanga had a dream: He saw a white bicycle crossing a bridge, while a godlike voice told him: 'You are going to make a peace bike.'

The prediction came true, and Salamanga founded Pazicleta, which, with the help of corporate sponsors, is distributing bicycles in poor, violence-wracked Colombian provinces to enable children to get to school, making them less likely to join outlaw organizations such as guerrillas and narcotraffickers.

Salamanga displayed his 'peace bicycles' today during Bogota's annual Expo-Bici, part of Bicycle Week, held in the Gran Estación shopping mall. Salamanga's initiative was one of the most idealistic and least commercial of the expo's offerings, which also included high-tech bikes, folding bikes and wooden bikes, as well as lots of accessories.

Near Salamanga's stand was Bicisi, which aims to produce custom-made yet affordable bikes, "so that nobody has an excuse not to buy one," explained Juan Camilo, one of the founders of the three-month-old company.

Much of the expo, which wrapped up with a group ride to Bogotá's velodrome, was unabashedly materialistic. I even saw a Pepsi photo booth, with curvaceous young women. Why let such destructive products into what's supposed to be a health-promoting event? 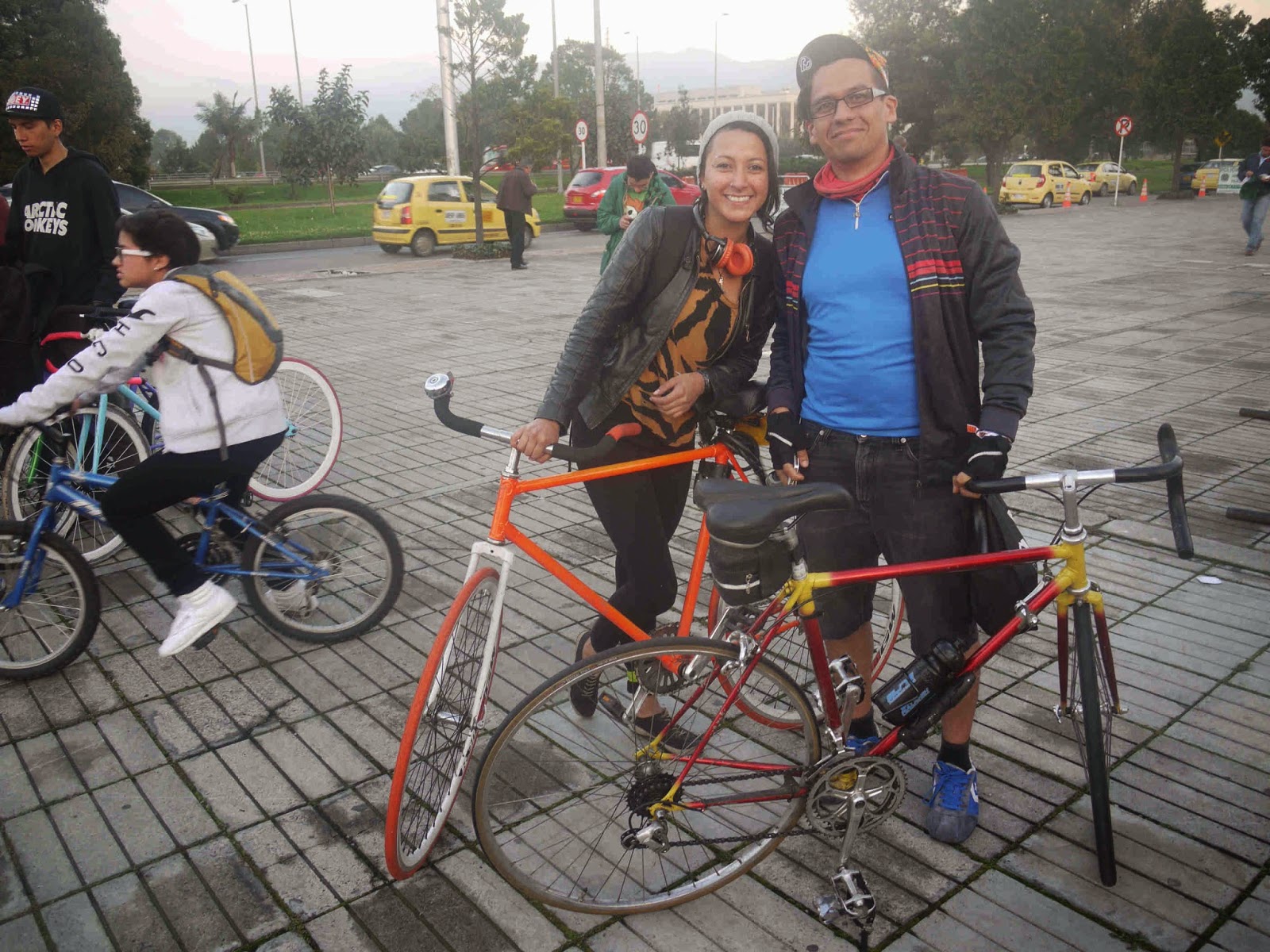 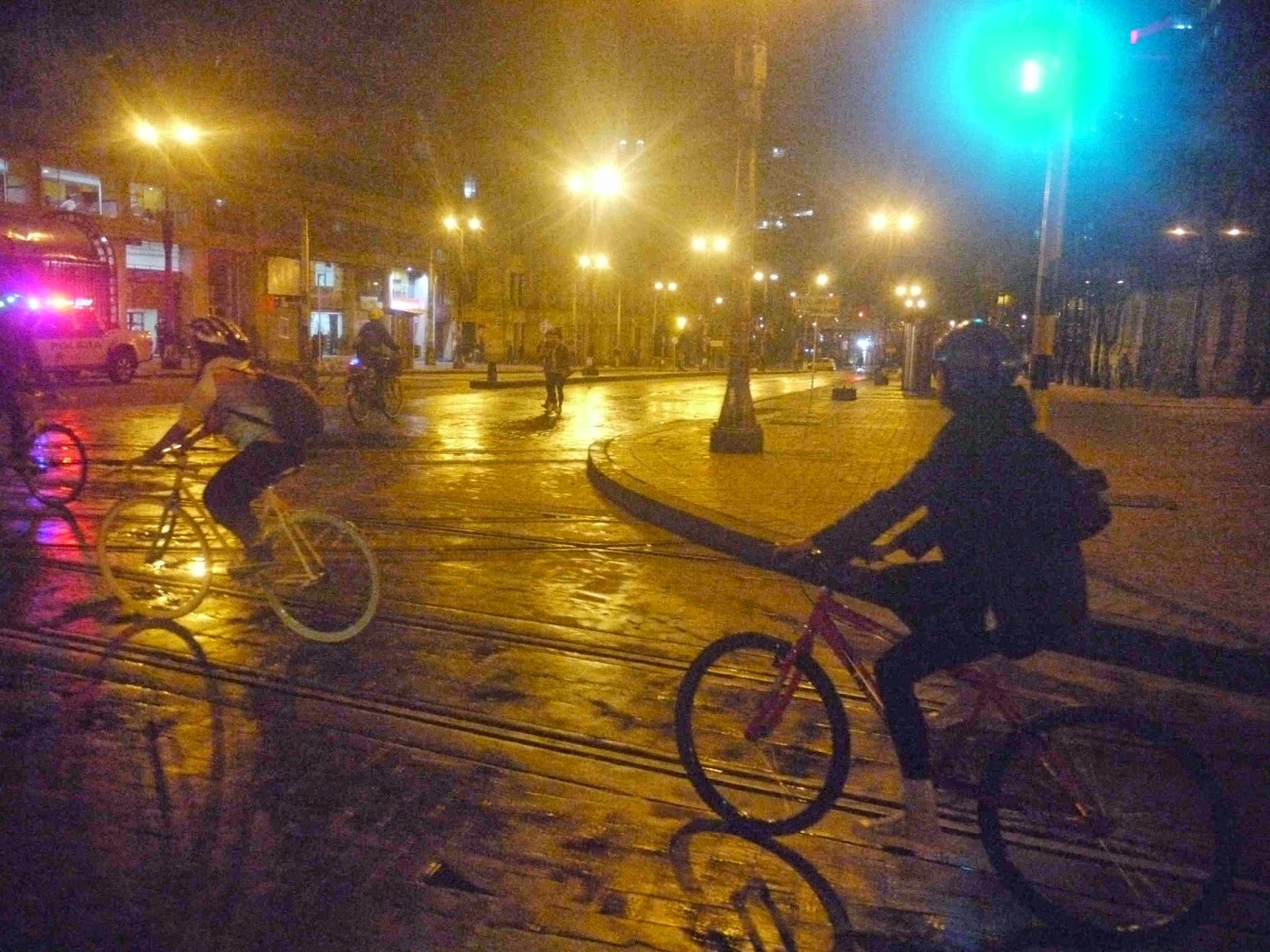 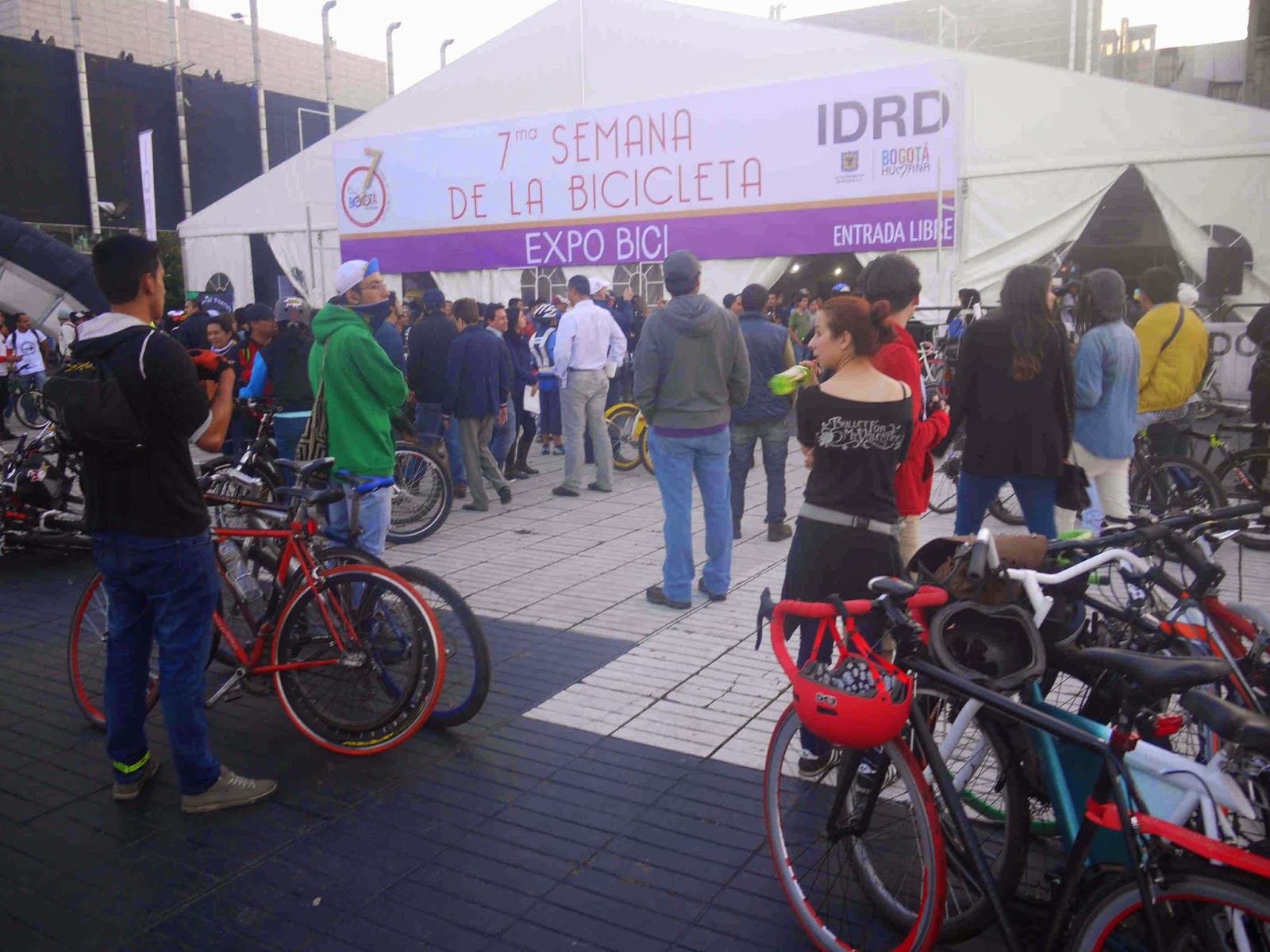 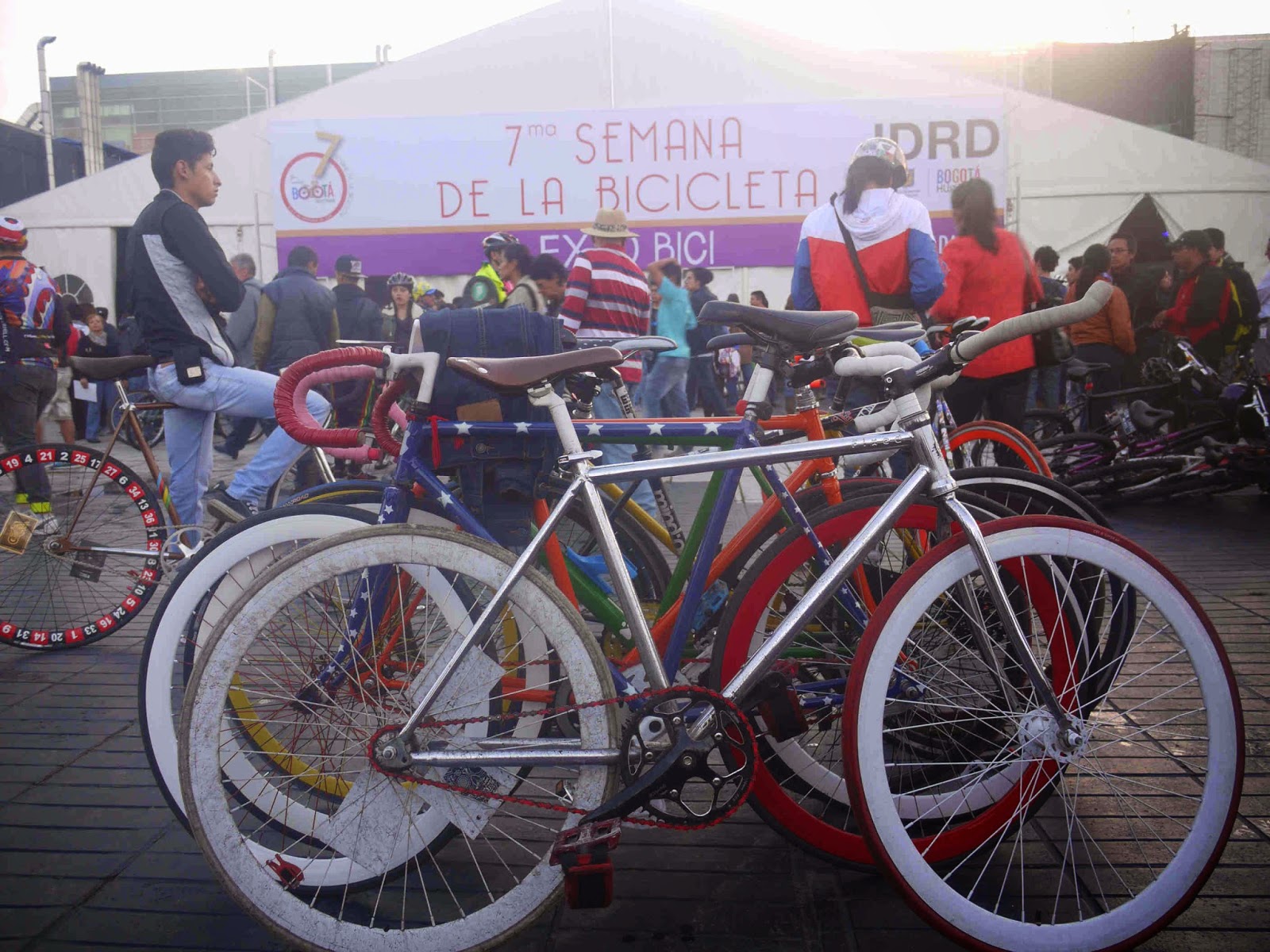