Today, a kid who helps out Bogotá Bike Tours was riding up Seventh Ave. delivering a bicycle to a hotel in North Bogotá when another cyclist blocked his path. When the kid braked, another guy pulled him to the ground and jumped onto his bike and rode off. 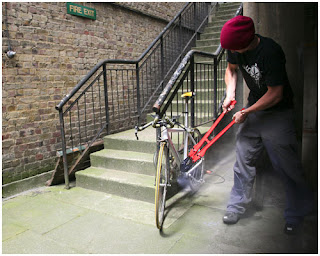 Thus, Bogotá Bike Tours lost the best bike we had, and an almost unique one. So, look out for a large blue bike with 'Diamond' written on its lower tube.

Bicycles are very stealeable, since they're small, portable, easy to hide and hard to trace. Most anti-theft advice involves buying a better lock. But if thieves are willing to pull you right off of your bike, it's hard to imagine how to stop them. Unless....

In this case, the kid said the Ciclovia was quite busy when he got mugged, at about 10:30 a.m. Lots of folks were around, and many even stopped riding to watch the crime. But nobody did anything. If only a few of the other cyclists had blocked the thief with their own bikes or grabbed his shirt, he probably would have leaped off of the bike and hotfooted away. After all, from my experience it doesn't take much to dissuade thieves, who are usually cowardly types going after easy money. If criminals were into challenging themselves, they'd get jobs and work.

But nobody did anything - even though their own bicycle could be next.

Bystander apathy is terribly common in Bogotá. A few months ago, a friend and his girlfriend got mugged by several kids with knives. A bunch of guys doing roadwork just a couple of yards away saw the crime, but did nothing. Perhaps they were afraid of getting mugged themselves on their way home from work. Or, maybe, like the local security guard who, I was told, was threatened the other day by a pair of professional muggers on a motorbike, who told him: 'You interfered with our mugging someone the other day. Do that again, and we're going to get you!'

But it doesn't take much. A few months ago I witnessed three kids mug a young couple. Perhaps I should have charged them swinging a board or something. Instead, after some hesitation, I just screamed at them to stop. Amazingly, the muggers did, and ran off. Other people in the street had apparently also seen the incident, but did nothing.

When we filed the police report about today's stolen bike, however, the officer made a good point about our own apathy. Once before, a bicycle got stolen from in front of our shop. Two of us went down to the shops notorious for buying and selling used, obviously stolen, bikes at absurdly low prices. There we found the guy standing with his hand on my just-bought bike. By threatening him with the police, we forced the guy to return the bike.

But we didn't file any police report, leaving the shop free to continue fencing other people's stolen bicycles.

I also asked him why, then, they didn't do something about the city's grave problem of sewer lid thievery. All they'd have to do would be hire some homeless person to visit scrap buyers with a lid, and see which ones bought it. Unlike bicycles, nobody has their own sewer lids, so the buyer and seller are by definition thieves. No, he said, that would be 'inducing someone to commit a crime,' and a sharp lawyer would free his client on such a defense.

I've heard this before. Can it really be true that Colombia doesn't allow such a fundamental police strategy as a sting operation?

Today, I rode from downtown to the Foreign Ministry to the DAS police headquarters, most of the way on one of Bogotá's most important Ciclorutas, the one on carreras 13 and then 11.

A typical scene on the 'bike route.'
Many times, as I hurried behind schedule, I had to brake suddenly and swerve around delivery vehicles, cars (at intersections) and pedestrians, who wandered across the bikeway or suddenly veered into it. I suppose that you can't blame them. While the Cicloruta receives significant use, it's not constant enough to keep pedestrians aware of it. This arrangement is a tragedy waiting to happen. Once, I almost slammed into a woman carrying an infant who wandered across the cycle path.

I don't usually advocate broadening streets, but in this case an in-street bike lane, with a barrier to protect it from cars, would be much more useful and probably safer than the sidewalk set-up. But on the other hand, it'd force cyclists to swallow even more diesel exhaust.

Unfortunately, a substantial number of Cicloruta users were motorized monsters, who belong out on the street. During my ride north and south I encountered five motorized bikes on the Cicloruta. Apparently, no law applies to vehicles with such small engines. Enforcement is another issue. Lacking any pollution or noise controls, motorized bikes are bad enough. But once their presence becomes accepted on Ciclorutas I fear that regular motorcycles will follow. 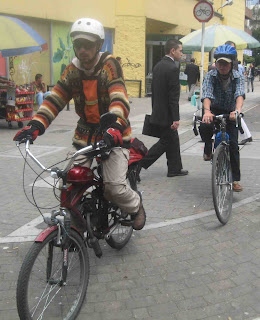 After fixing a flat, I arrived at the Foreign Ministry office with only minutes to spare before it closed at 12 noon. I rushed into the automobile parking lot across the street, where I'd left my bike before - but something had changed.

"We don't receive bikes here," the attendant told me.

"But the law requires you to!" I protested.

I had no time to argue, and went around the corner to lock my bike to a tree.

On the way home, a downpour had made room on the Cicloruta.
On the way, I encountered El Toma Corriente's shop. They sell electric bikes designed in Colombia but built in China out of Chinese, Japanese and Taiwanese parts. (Why can't Colombia build such things competitively???) The bikes cost a bit - 1.8 million pesos ($1,000) and upward. And the batteries must be replaced after about 1,000 recharging cycles - and constitute half of the bikes' cost. 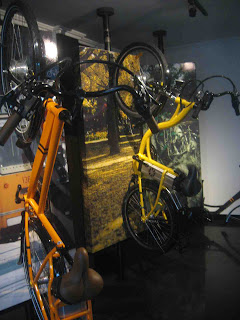 But e-bikes don't pollute or make noise and require much less maintenance than gasoline-powered bikes. And, here in Colombia, where most electricity comes from hydropower, they contribute much less to global warming, as well. I've seen at least two e-bike vendors in Bogotá, (the other sells Ezip Currie bikes) but the guys at El Toma Corriente told me there are about seven.

Secure bicycle parking can be hard to find in Bogotá. Many car parking lots refuse bicycles - despite the law requiring them to accept them. Or, try locking your bike to a pole on a sidewalk and you could be pounced on (as I've been) by police and security guards enraged at this violation of civil order. On the other hand, if you do manage to park your bike in public, don't be too surprised if it's a bit lighter on your return.

But this guy, whom we met during a bike tour, did manage to find secure bicycle parking - and on an upper story, no less. His treehouse is alongside the Iglesia Santa Ana in the Teusaquillo neighborhood.


Here's the tree man, Glautier Nieves Estrada, on his bike. He's lived up there for seven years and appears happy with his lodgings, despite some hostility from neighbors. He makes his living by scavenging the trash for saleable recyclables, so he's doing his bit for the environment.

He comes from a peasant family from the Valle del Cauca region. They were driven out by paramilitaries, who this man said chopped their victims into pieces, and became more of Colombia's millions of people displaced by the country's armed conflict. He lost contact with all of his relatives, including his three daughters.

UPDATE In early January 2011 the man's house disappeared from his tree. I'd heard that some neighbors had complained about him, so perhaps they removed his things while he was gone. He's probably under a bridge, now.

Or, perhaps he reunited with his daughters. We can always hope.

Bogotá's Nocturnal Ciclovia - is no Ciclovia at all!

Bogotá's annual Nocturnal 'Ciclovía' happened on Dec. 8. Thousands and thousands of bogotanos, almost all of them on foot, packed Bogotá's central avenues and parks and had a great time admiring the Christmas lights. But, with the streets so crowded that you could barely turn around, it was no Ciclovía!
By Mike Ceaser of Bogotá Bike Tours
Publicado por Ciclistas Bogota en 19:17 No hay comentarios: