The Pleasures of Shared Bike Lanes 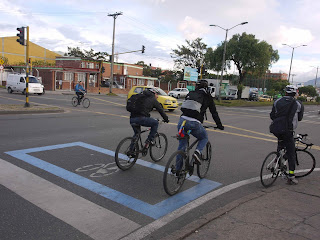 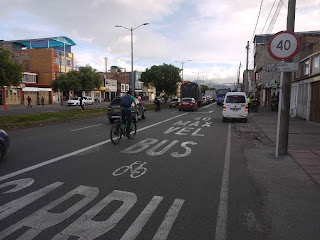 Should bicyclists on this busy avenue in south-central Bogotá, near the Primero de Mayo, feel privileged? After all, this avenue has a special bike/bus lane, as well as 'bike boxes' for waiting safely at intersections.

But the reality doesn't match the theory. On the pavement, here's the cycling experience: 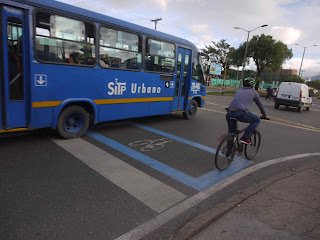 With luck, the public bike system will actually happen this time, after pilot projects which got nowhere and even a contract issued during the Petro administration, which from the start appeared viciated by corruption and unrealistic economics.

Unfortunately, Peñalosa's plan doesn't look so realistic either. He promises not to provide any public subsidies for the bicycle system, even tho they do receive such subsidies in many other cities, including even much wealthier ones than Bogotá.

That's because the bikes are conceived of as a public service, which pays back the city in benefits in health, reduced traffic congestion and less pollution.

In those cities where public bikes do not receive subsidies they do have wealthy corporate sponsors, often banks, such as Citibank in New York and Barclays in London. And those are also much wealthier cities than Bogotá, which receive many more tourists, who provide income for the system.

Besides all of that, cities subsidize bus and train systems, as well as private cars in many ways, such as subsidized gasoline. So, what's wrong with pitching in for public bicycles? 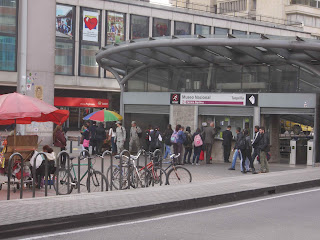 I must have passed by this spot hundreds of times since the Museo Nacional TransMilenio station was completed without realizing the transcendent nature of what I was seeing.

Several TransMilenio stations have huge, sophisticated bike parking facilities. But most of the express bus stations have no bike parking at all, despite it being a standard feature of transit facilities all over the world. Is this just shortsightedness and ignorance? An exaggerated fear of someone hiding a bomb on a bike? Concern about taking responsibility for parked bikes?

Whatever the mistaken reason, the lack of racks reduced the system's usefulness for   cyclists, and certainly meant lost passengers.

This particular bike rack, I suspect, was not created specifically to serve the bus station, but for the pedestrian region surrounding it. But the rack nevertheless serves the bus station, showing that no-frills bike racks and buses are compatible.