A Visit to La Guarida

To get a feel for Bogotá's hip and high-end bicycle scene, you could do worse than visit La Guarida, a bike business complex located in Chapinero, across the street from the El Campin stadium.

From outside, La Guarida offers barely a hint about itself. The three-story light blue house could be a university rooming house, judging by the bicycles parked around the entrance and the bar on the first floor. However, the bar is outfitted with a cycling decor, and alongside it there's a small bike repair shop - evidently concentrating on high-end machines.

Climb the stairs to La Guarida's second floor and find the Biciosos bike shop, a small place but crammed with bike gear, including the sort of German-made bikes you'd better not take your eyes off of on Bogotá streets. In the other corner is a barber shop - also with a cycling decor. Are the haircuts here aerodynamic?

The top floor holds a cycling jacket maker run by several French
guys. The reversible reflective MOVA Cycling jackets are nifty and innovative, either water proof or breathable, depending on how you wear them. They have integrated lights, their own stuff bag and hidden pockets to protect against those ubiquitous Bogotá pickpocketers. However, at several hundred thousand pesos, these jackets might get stolen themselves. Unsurprisingly, Mova exports most of its production.

Sharing the floor is Concienbiciate, whose name means something like 'integrate cycling into your consciousness,' and which lays claim to being Bogotá's largest bicycle activist organization. The colectivo definitely does turn out huge groups of cyclists - thousands, says a friend who is a member - who make racous rides thru Bogotá and the countryside. Hopefully, they can turn that momentum into pressure for more bike-positive city policies. 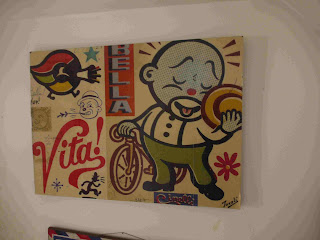 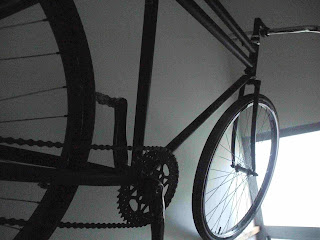 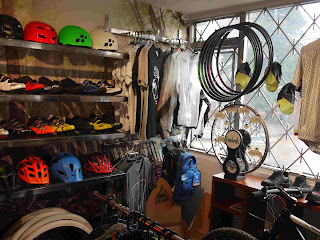 Bogotá did a nice job on its newest bike lanes - but if only they were connected.

The Cicloruta de la Calle 116, inaugurated last week on International Bicycle Day, is nicely laid out,
protected from motorized traffic, has smooth road crossings and even some views. And it has not been invaded by street vendors - as of Friday, anyway.

Still, the lane shows some of the symptoms of the ills of Bogotá cycling: A lot of the cyclists wear facemasks, in probably futile attempts to filter out diesel particles. And, at Carrera 15 the lane simply ends, with no connection to another lane. (An adjoining street does have a meaningless sign: 'Shared use with bicycle priority.') The lane then reappears at Carrera 19 and continues to Carrera 50, for a total of 2.4 kms.

The neighborhood's bike lanes seemed quite busy, at least on the late afternoon when I rode them. A government study reported that some 82,000 cyclists ride thru area every day. The number, while large, does seem believable. Which shows that bicycles are carrying a significant number of Bogotá commuters, altho the city's worsening traffic jams show that car use has increased as well.

When Mayor Enrique Peñalosa inaugurated the lane last week he said that Bogotá now has 500 kilometers of bike lanes, with 20 more projects under construction, which will total 40 additional kms of lanes.

During the inauguration, Peñalosa also said that motorized bicitaxis would be banned from the new lane. Hopefully that will be enforced, and not only on this lane, but all of Bogotá's bike lanes. But he wants to allow pedal-driven cabs to use the lanes. Pehaps this also means that the city will finally crack down on the motorized bicycles, called bici-motos, which cruise the bike lanes as if they were bicycles.

And on my way back south, bike lane troubles:

The Poisonous Pleasure of Bogotá Bicycling!

Early this morning, I was pedaling north on Carrera Septima's bike lane, when I passed this SITP bus (sold to us as the solution to the city's pollution problem). Unfortunately for the suffering cyclist behind me, he or she didn't get past in time

When the city announced a 'yellow alert' a few weeks ago warning of high air pollution levels,  envirobnmenal authorities promised to crack down and said that they had temporarily shut down highly polluting factories and fined thousands of 'rolling chimneys.' If that's true, then why we see these vehicles every day belching CO2 and smog into our eyes and lungs.

The other day, El Tiempo published this damning editorial denouncing the so-called 'bici-motos,' or bicycles with small gasoline motors mounted on them, which in plain terms are just small motorcycles.

El Tiempo points out that the "dangerous, illegal and polluting bicimotos" roar along the bike lanes in
"flagrant violation" of the laws banning them and exposing cyclists to dangers from these high-velocity vehicles.

The editorialist, who might not be a cyclist, doesn't mention how unpleasant cycling is when one is stuck behind one of these noisy, fume-spewing vehicles.

"There is no justification for exposing cyclists to such dangers," the editorial concludes.

The problem with these vehicles is sympomatic of several Colombian infirmities: lack of law enforcement, apathy toward pollution and an absurd degree of legalism. The bici-motos enjoy  legal immunity thanks either to authorities' apathy or to the legal fantasy that motors smaller than a certain number of cubic centimeters are not really motors at all - even tho they're often noisier and more polluting than automobiles.