In the year or so since my camera broke and I got too busy to blog, Bogotá has moved forward on some bike issues - and backward on others.

They've added bike lanes - some of which are actually useful and well-used.


But I just wish they'd keep the motorized bikes out of the lanes...

And, finally after years satisfying what's a personal issue of mine, after years of delay and mulitple complaints from cyclists, the city's transit geniuses finally decided that cyclistas had the right to safely cross this street behind the Central Cemetery. Until they retimed the lights, giving cyclists and pedestrians time to cross. They even added a signal for cyclists. 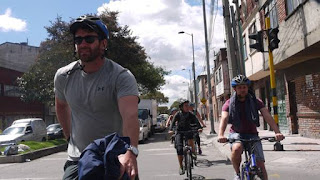 Previously, as soon as the cars driving north across the bike lane stopped, other cars immediately starting turning left across the lane. That left no time between car traffic for bikes or pedestrians to cross, generating constant conflicts between cyclists and motorists.

But the news isn't so great for public bikes.

A few months ago, then-new Mayor Enrique Peñalosa - who campaigned for mayor on a bike - terminate the IDRD's bike lending programs on Carrera 7, in the Universidad Nacional and Parque El Virrey. Apparently, the program cost too much.

The program was, irrationaly, limited. You coul not pick up a bike in one part of the city and drop it off in another, for example. But it was Bogotá's only public bikes lending program.

Not a single bike has hit a street. That's not surprising, since neither the Colombian nor the Chinese companies which one the contract had experience with bicycles, the Colombian partner had been involved in two corruption scandals, and the contract's business model was totally unrealistic. (The contractee was supposed to pay the city, whereas just about everywhere else, public bikes lending schemes lose money and are either subsidized by their cities or receive lots of advertising income.