A Bicycle Not Built for Three 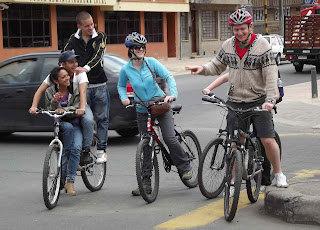 During a bike tour today, we met these three young people in the Santa Fe neighborhood. Bogotá's  government has started a well-meaning by pointless campaign to get people to share their cars - something which will happen only if they create real incentives or fines to spur people to change their driving habits. But these three did the city's campaign one better, by sharing their bike. In a city with low rates of car ownership and high rates of poverty, this sort of bike sharing is a common sight. I often see parents pedaling home with schoolchildren perched on the bike's bar or on the back - and sometimes even both places.