Can You Steer After One Beer? 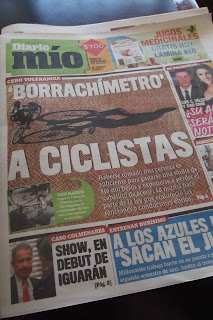 Congress is considering commendable but long-overdue legislation to crack down on drunk drivers, which kills and injures many people every year in Colombia - and frequently go unpunished. And alcohol unquestionably kills and injures many cyclists - Mio newspaper reports that 15 cyclists have died so far this year because of drunk riding, and 43 were injured while pedaling under the influence. Undoubtedly, those numbers are only a fraction of the real toll, and that many more bicyclists have been killed and injured by drunk drivers. (Tragically, drunk drivers often get off with light punishments or none at all, even when they kill people, because of corruption or a general belief that drunkenness is all in good fun, and that whatever one does while drunk is forgiveable.) 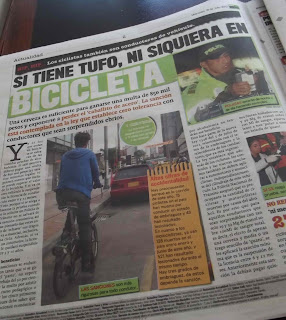 What strikes me as unwise and unrealistic about this law, particularly for cyclists, is the very low threshold to be legally inebriated, which the newspaper says can be violated by drinking only a single beer or a beer and a half. Whether that's a reasonable limit for car drivers, I can't say. But it sure seems low for cyclists, which move much slower than cars and pose much less danger for pedestrians and others. Getting caught could mean a fine of 850,000 pesos, or close to $500.000 - a lot of money for cyclists, who generally are poor or lower middle class.
In any case, the legislation will have a tough time passing: A congresswoman who advocates for victims of drunk driving recently charged that many of her colleagues don't want to crack down on drunk driving because they do it themselves. 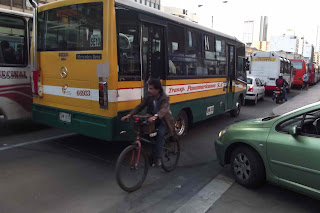