The Return of the 26th Street Ciclovia

The 26th St. corridor, historically one of the most important sections of Bogotá's famed Ciclovia, reopened today after being closed for years because of TransMilenio expansion work which is years behind schedule. 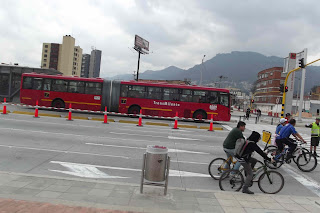 Beyond the return of this major Ciclovia section, the restoration of the 10-kilometer 26th St. route also signals the city's commitment to at least some aspects of cycling. It also bodes positively for the survival of the 7th Ave. Ciclovia, its most important section - whenever the city finally builds efficient public transit there.

Transit officials have worried that the TransMilenio buses could endanger nearby cyclists by the air turbulence they generate. But, apparently officialdom has reconsidered the risk and decided that cyclists and TransMilenio can coexist. Nevertheless, any danger could be more of a factor on Seventh Ave., since it's much narrower. (The city's latest plan is to build light rail on Seventh, but nothing's certain.)


On the other hand, the 26th St. Cicloruta, or bike lane, which was built into the new TransMilenio line, has received lots of criticism. Check out this humorous video, which highlights the lane's few of entry and exit points.

Also, on its eastern end, the bike lane separates from 26th St. and follows its old route, passing thru the grimy Santa Fe neighborhood and the red light district to connect to Seventh Ave. Unfortunately, fear of crime will discourage some cyclists from using this route. It's also made difficult by neglect and the general sad state of the Cicloruta. Take, for example, this homeless scavenger who blocks the Cicloruta with his cart most every day. Police, obviously, give protecting Ciclorutas little importance.