This Wednesday, City Councilman Carlos Orlando Ferreira had scheduled a public hearing on the future of La Ciclovia de la Septima. (The councilman apparently did not know that city officials had promised the cycling community that the Ciclovia would not fall victim to planned Transmilenio construction on Seventh Ave.)

As it turned out, I heard only one speaker even mention La Ciclovia, altho it did become very clear that nobody plans a bike lane for Seventh Ave. Almost all the speakers at the hearing talked only about whether or not a Transmilenio line should be built on La Septima, and if so, whether full-scale TM or Mayor Moreno's 'TM light idea.'

But I did talk to folks about bicycling issues, and got updates on several cycling subjects:

- Ferreira's much-ballyhooed public bikes program apparently has not advanced - but he says he hasn't abandoned it, either. Ferreira now plans to launch a pilot project in June. But he had no more details, such as in which neighborhood it would function, or how many bikes it would involve. Which suggests to me that it won't happen. And, as I've written before, to make public bikes succesful, Bogotá needs to solve problems such as the chaotic traffic and pollution so that people are willing to get on bicycles.
- Mayor Moreno's promise to build 20 kilometers of new Ciclorutas hasn't happened. Andrés Felipe Vergara, a member of the city's Bicyclists' Consultant Group (Mesa de la Bicicleta) and leader of the Wednesday night bike rides, said the city recently built about a kilometer of new bike lane in north Bogotá, around 125th St. - but that this Cicloruta is poorly designed and impractical to use.

- Andrés also pointed out a fundamental problem with the city's Ciclorutas - they were built and are (supposed to be) maintained by about four different public agencies - the city's Transit agency, the Urban Development Institute (IDU), the water district, and maybe even more. Each agency has built some stretches of Ciclorutas, but there's little coordination between them, so the network is disjointed and unconnected. Also, many are poorly maintained, and with such a variety of agencies, it's hard pinning responsibilities.

- Andrés also gave me a sad news item. The Mesa de la Bicicleta, a sort of citizens' consultancy group on cycling issues, has ceased to meet. Andrés said this is because nobody listened to their proposals. The Moreno administration has never seemed interested in cycling issues. 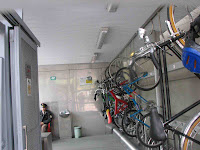 - Finally, the bicycle parking building at the Las Aguas TM station is operating, and is being used, altho demand has not been overwhelming. Today, I counted about a dozen bikes hanging inside (it has some 140 spaces) - which at least means a dozen cyclists' lives facilitated - and perhaps a few more bikes on the road. The facility opened after sitting empty for years, and only after cyclists held a mock funeral in protest.