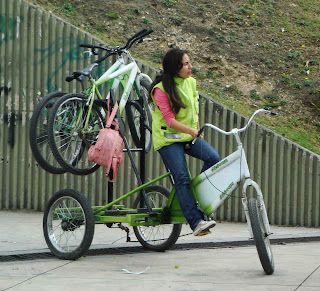 The National University's Bogotá campus, the nation's largest university, has had public bikes on campus for about two years. The green one-speeds have only one brake - in the rear. But since the campus is flat, not much breaking power is needed. The photos shows a student who is collecting the public bikes to store over a weekend.
Unfortunately, the program began with more than 1,000 bikes but has only a few hundred left operating. Some have been stolen, others suffered abuse and damage.
Now, a city councilmember is proposing creating a public bicycles program like those in Paris and Barcelona for Bogotá. It'll be great if it works, but sadly I have my doubts.
This blog is written by Mike Ceaser, who runs Bogota Bike Tours www.bogotabiketours.com
Publicado por Ciclistas Bogota en 10:50