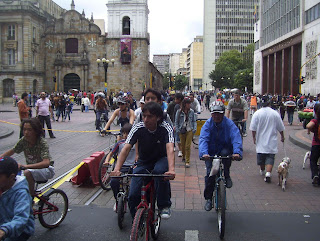 There's a new threat to the world-famous Ciclovia! The city is advancing with plans to build a TransMilenio line on 7th Ave. Rational transit on 7th will be a big improvement over the existing chaotic and ancient private buses. However, 7th Ave. is also the heart of La Ciclovia, and if they shut it during construction (as they have on 26th St.) the Ciclovia will be but a shadow of itself.

The city could either let the Ciclovia continue using the 7a, perhaps with a few temporary detours, or shift it to a neighboring avenue, such as 13th Ave.

Let's not let the Ciclovia die!

This blog is created by Mike Ceaser, owner of Bogota Bike Tours, in Bogotá, Colombia