It's Time to Save Bogotá's Ciclovia Once Again! 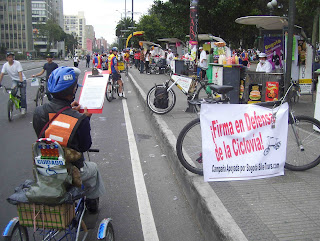 For those who don't know, the Ciclovía is a unique and wonderful Bogotá phenomenon. The city shuts down a network of major avenues and many thousands of people turn out to bicycle, jog, walk, skate - really anything. There are mass public aerobic classes, free music, street artists, flea markets and sellers of all kinds. It's a wonderful, unique, spontaneous and very healthy and human happening. (http://www.streetfilms.org/archives/ciclovia/)

Now, a new threat has appeared, a result of the city's plans to extend the Transmilenio express bus system along Seventh Ave. Seventh Ave. is chaotic, polluted and inefficient, with thousands of old diesel buses belching along, so building a more efficient transit system there can only be an improvement (altho which is the best option is arguable).

However, the problem is that when they started Transmilenio construction along 26th St., which leads to the airport, they removed the Ciclovia from that Ave., at least temporarily.

The Seventh is one of Bogotá's most famous avenues, and certainly its most emblematic one, since it runs past the presidential palace and Plaza de Nariño, as well as important parks and many neighborhoods. Removing Seventh Ave. from the Ciclovía would be a fatal blow. It would lose its prominence in the city and thousands of users would lose access to it.

We're demanding that the Ciclovia of the Seventh be preserved. We also want to be certain that after Transmilenio is operating on Seventh Ave. the Ciclovia will still be there, even though there will be one less lane for cars.