More folks seem to be cycling to and through Colombia - here's a Belgian and an American. Notice that neither rode a mountain bike! 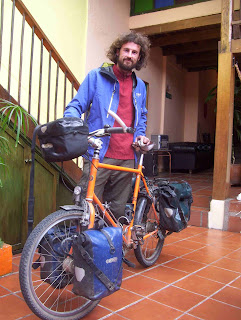 Jean, from Belgium, cycled from Chile/Argentina to Bogotá - some 9,000 kilometers over seven months. He took it easy, he said, stopping to camp and visit whenever he felt like it. I met him in the Hostal Fatima, around the corner from Bogota Bike Tours' shop. He said the Carreterra Austral in southern Chile was particularly beautiful, with tiny towns along the way.

He enjoyed Bolivia because of its remoteness. In Colombia, he said, motorists were generally more considerate, perhaps because they're more used to finding cyclists on the road. In Colombia he also found it easier to buy parts for his bike.

Jean's bike is a real technological marvel to a guy like me, who grew up with center-pull brakes and three-speeds with coaster brakes. In fact, I still use lots of those things. In contrast, Jean's bike had hydraulic brakes, an electromagnetic generator inside the front hub which powered his lights and German-made gears inside the rear hub. (Jean said the Shimano hub-gears also worked well, but that the German ones gave him more range for touring.) Despite all this hi-tech, Jean didn't have problems with spare parts. The only time he needed something not available in South America - a part for the brakes - his parents very conveniently were able to bring the piece with them on an already-scheduled visit. Otherwise, he said, the company would have sent the parts UPS.

In general, Jean said he enjoyed riding in Colombia - except close to Bogota, where the roads became quite busy. He recounted one moving experience, when a Colombian man road with him for a stretch and told Jean that he cycled every day in memory of his son, who was killed in a traffic accident (altho not while cycling). The Colombian man gave Jean some money to have a beer in the next town.

Jean met many other bicycle tourists during his ride, some of whom really impressed him with their accomplishments on two wheels. One couple were carrying packed trailers behind their bikes - and their 8-year-old baby daughter!

Another cyclist - this one from Atlanta, Georgia, standing in front of Bogota Bike Tours' shop - who also came by to have his pedals removed for shipping. We're getting better at remembering which direction to turn to loosen them. Seems like more and more people are bike touring Colombia. 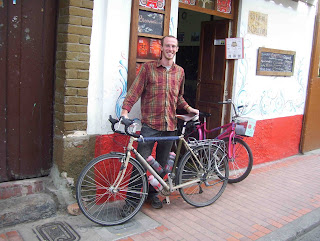