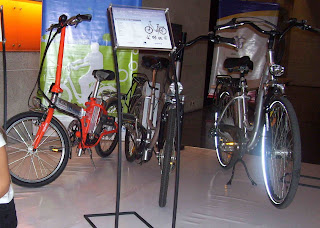 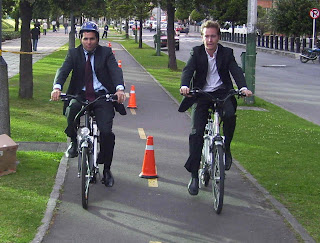 The other day I attended an event on sustainable transport, where experts from Colombia and other countries expressed their views. One thing which makes no sense to me, and which at least one speaker talked about, is the fact that the Transmilenio express bus system uses diesel fuel. In a city with a smog problem, where most of the terrain is flat, wouldn't it have made more sense to use natural gas or electricity?

Someone had brought several electric bicycles to show off and demonstrate. I test rode two of them, and they rode smoothly and were fun - you pedaled a bit on one of them, and it really took off. Silent and smooth and produce no exhaust.

In Bogotá, 'bicycles' with a small, gasoline-burning motors have become popular recently. But a bicycle with a motor is a motorcycle. And these motorized bikes, called 'mosquitoes' in Chile, are noisy and polluting. Are they environmental? They don't seem like it, altho I guess an argument could be made if they were replacing cars. But I rather suspect that motorists aren't selling their cars, but that cyclists and bus riders are switching to these motorbikes.

Electric bicycles, in contrast, do have a real 'green' image - probably because some residents of rich nations do use them when they might be using cars. But even if e-bikes don't pollute during use, the power plant which produces their juice is pumping CO2 and noxious gases into the air. And what happens to that old battery?

Seems to me that electric bikes can be called environmentalist when they replace car use - something which happens in developed nations. But someplace like Colombia, an e-bike user probably has moved 'up' from a regular bike, actually increasing his impact on the environment.