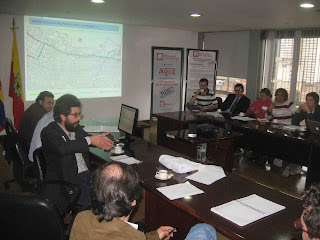 * During the impending year-long construction of a Transmilenio line on Bogotá's Seventh Ave., La Ciclovía will be given an alternative route.

* Once the TM line is operating - supposedly at the end of 2011 - La Ciclovía will return to Seventh Ave.

* And the 26 St. Ciclovía, which disappeared for construction of another TM line, will return once work is (finally) done.

The officials also committed to looking again at the Ciclovía lines which disappeared from 30th and Boyaca Sts because of Transmilenio.

But before we declare complete victory, look at the official proposed alternative Seventh Ave. Ciclovía route: 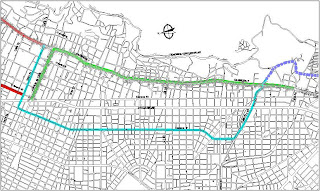 Expect a substantial drop in Ciclovía participation. The climb and the need to pass through La Perseverancia and other rough areas along 17th Ave. will discourage people, as will the much greater length.

But let's look at it from the perspective that no other possible route could equal 7th Ave., which is broad, flat and passes by many of the city's landmarks. (The officials at the meeting said that keeping La Ciclovía on 7th Ave. was not realistic: there will be lots of heavy equipment and excavations, and much of the street will be shut down by the construction.)

The officials said they considered: safety, traffic needs and the importance of passing through the National Park.

Angelica Lozano, leader of an organization defending La Ciclovía, proposed an alternative route following Caracas Ave.. for much of its length. But officials asserted that the Transmilenio operating on the same street pose too great a risk for the Ciclovía crowd, which includes seniors, children and pets, so that option didn't sound probable.

The most positive news from the meeting was officials' promise that the Ciclovía will return to Seventh Ave. when construction is completed, hopefully by the end of 2011. And officials appear to have thought through the coexistence of the Ciclovía and Transmilenio on Seventh Ave. The plan is for all traffic, including TM, to use only Seventh Ave's western half during Ciclovía hours. The difference between Seventh Ave. and Caracas's TM lines is that Caracas is one of TM's trunk corridors, meaning a much greater frequency of buses. In contrast, some of Caracas Ave's buses can be diverted onto Caracas Ave. during La Ciclovía.

Don't overlook the tremendous contrast between the fates of 26th Street's Ciclovía and 7th Ave.'s. The 26th St. Ciclovia was closed months ago with no public discussion, outcry or replacement plans. Those who have demonstrated, collected signatures and spoken out in the media in defense of Seventh Ave's Ciclovía deserve credit for making public officials take cyclists and others into account.

During the meeting, we were entertained by the blaring horns from traffic jams a dozen floors below and several blocks away. Those traffic jams will only grow worse as 110,000 additional cars enter Bogotá every year. Hopefully, perhaps, tal vez, this meeting will start a new official attitude giving cyclists and other clean transport priority over cars, or at least a fighting chance.

Certainly, it's hard to imagine a transport system that's dirtier, slower and less efficient than the traffic on Seventh and Fifth Avenues, which run on either side of the IDU building, and offer no room for cyclists.

There's certainly lots left to be done in Bogotá. Will they build a bike route or other facilities for cyclists on Seventh Ave? Will the planned TM line on Sixth St. include a Cicloruta? Will the IDU HQ building replace the bike parking rack it used to have by its entrance?