The Bicitaxistas Fight for their Right to Pedal! 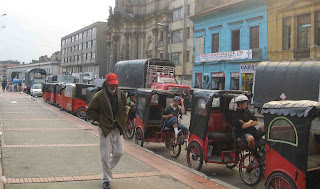 But not if you drive a traditional polluting taxicab and believe they're taking away your business.

Thousands of bicitaxis - pedal-powered rickshaws which can carry two or three passengers in back - work in Bogotá, carrying passengers for short distances. However, as a recent El Tiempo story pointed out, they're all illegal. 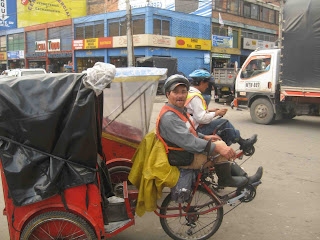 It's insane. A city with terrible and worsening traffic congestion and lots of pollution prohibits clean transport. But it's not surprising, considering that the regular taxi drivers pack a political wallop and want to protect their turf. This is despite the bicitaxistas' argument that they don't compete much with auto-taxis, since they carry people only short distances, rarely more than a dozen blocks.

All of which is irrelevant, anyway. The bicitaxis are less expensive, maybe faster and non-polluting. They deserve to run the polluting machines out of business.

Instead, the city has managed to call the 'solution' a 'problem.'

Pity the poor bicitaxista. He works 12 hours a day, one tells me, and can take in about 30 - 40,000 pesos. But, if his taxi is rented, about 15,000 of that goes to the owner, leaving him only some $8 to $13 for a day's sweating. Income depends on factors like the weather, mechanical troubles, and the day of the week. 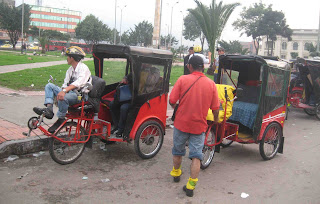 The bicitaxistas also have to contend with the police, who sometimes confiscate their pedicabs, requiring a 200,000 peso retrieval charge from
patios. A new bicitaxi costs about two million pesos.
But, as difficult and low-paid as it is, the bicitaxis provide jobs for many people who, because of their age, life history or lack of skills, can't find other kinds of work.

Armando, who has pedaled a bicitaxi for almost a decade near the Plaza de los Martires in central Bogotá, says that about 60 bicitaxistas work in the area, carrying passengers primarily between the Transmilenio station and the San Andresitos shops as far as a dozen blocks west.


The bicitaxis don't pollute or make noise, Armando points out, and they can often zig zag their way through traffic. He acknowledges that in an accident a bicitaxi is more vulnerable than a car, but points out a bicitaxi can often leave its passenger on their doorstep, protecting them from street crime.

And, they charge much less than a polluting taxi - just 1,000 pesos to carry someone 12 blocks. And, they do something regular taxis don't - they carry together people who arrive separately, meaning less expensive and more efficient transport for everyone.

Armando blames authorities' resistance to legalizing the bicitaxis on the drivers of regular, polluting taxis. But he says the bicitaxistas are organizing and lobbying politicians. They've even blocked the nearby Transmilenio line to get attention.

"We keep on growing," he says of their numbers.

But the city's close-minded policies, controlled by vested interests, are blind to the bicitaxis' advantages.