How to Not Park Bicycles 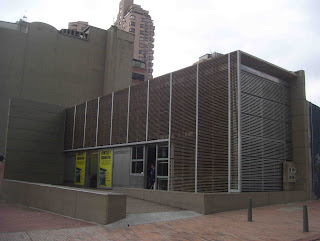 This handsome bicycle parking facility was built beside the Las Aguas Transmilenio station, near the La Candelaria neighborhood. It has a sophisticated elevator to reach the second floor, space for more than 100 bikes and even lockable footlockers for people to store their things.

Sounds like an important step for cyclists by a forward-thinking city government, right? Sure would be - if it were open. But it isn't.

More than two years after this sophisticated and expensive (but poorly designed) structure was finished, it's still closed. Today, there were about three bikes parked there. But only vendors from a single street vendors' center can park their bikes there - and only if they have a special permit from a particular municipal government agency. Upstairs, there were several dozen bicycles used by the 'guards' during the Sunday Ciclovia. Talk about an expensive way to store bikes, which could simply be leaning against a wall in a warehouse. 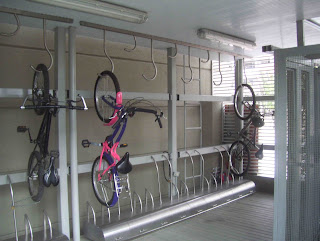 What's the lesson in this? That in the city government there are people with good intentions to promote cycling. But, somewhere between the idea and the act, something goes wrong - bureaucracy, incompetence, poor planning - whatever. To me, it also looks like yet another example of Bogotá's top-down planning practices. Did they consult with real bicycle commuters before deciding to build a parking facility whose sides are built of slats which let the often-torrential rain in? Did they consult with other mass transit bike parking facilities before deciding to build this, apparently without any plan for operating it?

Did they study the potential demand before deciding to build large, expensive facilities at a few stations, rather than just placing cheap, simple bike racks at all the stations?

I've commented and complained about this situation (and there are three more of them in Bogotá) over the years, to little avail. Sadly, most likely one day a politico will seize on this as an example of why we shouldn't waste money on bicycles, but build instead more car parking lots - which do get used (and don't require permits to park). Nobody will observe that bicyclists didn't ask for or help design this project.

The word I'm hearing about this facility is that it hasn't opened because the government hasn't found a private entrepreneur to manage the thing for a profit. The reason is obvious: the few hundred or thousand pesos which most cyclists here would be willing to pay to park their bikes will never pay the costs. Of course, that's true in wealthy countries, as well. The problem here is a fundamental error in approach: a bike parking facility should not be seen as a commercial venture like a parking lot for cars, but rather a public service, similar to a library, meant to promote a public good.

Let's hope that the public bikes project which one city councilman wants to create is better planned and carried out.

To the city government's credit there are large, well-used bike parking facilities at some of the Transmilenio terminals, mostly in the city's poorer, southern neighborhoods.