Another Victory for Bicycles! 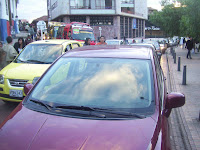 Rush hour, but nobody's moving!
This morning, a cyclist, a Transmilenio rider and a car driver 'raced' 7.5 kms across Bogotá during the morning rush hour. Naturally, the cyclist (Ferreira, the city councilman who plan to create a public bicycles program) arrived first, in 20 minutes. The Transmilenio rider arrived ten minutes later, and finally the car driver, five minutes after him.

Hopefully, this will convince a few more Bogotanos to cut their commute time in half by dusting off their bikes. Unfortunately, the Transmilenio rider, who also heads the National Federation of Retailers, FENALCO, did nothing but complain about the system's 'inhumanely' crowded conditions. It was, unsurprisingly, the first time that he'd used the system, and probably the last. Transmilenio is crowded because it works. I'm sure that he considers sitting in his car for hours trapped in traffic and spewing pollution much more humane. Incidentally, FENALCO wants to sell cars.