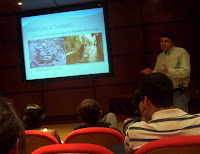 This afternoon, several NGOs and universities held a meeting about Bogotá's troubled transit situation and  bicycles' potential role in improving it. Naturally, the sentiments were sensible and accurate - if the number of cars here keeps growing, the city will become strangled. Even if this was mostly preaching to the converted, the message was nice to hear.

There's a plan in the works to create a public bicycles program here, called 'Bici-centro' or 'Bici-Bogota,' which would be great - if it works. And a professor from Central University is doing a study on transit, and the role bicycles can play in that.

But, while all of these studies and plans are making their slow way through the bureaucracy, and hopefully not en route to the round file, nobody at all is yelling about the severe problems Bogotá cyclists suffer right now - pollution, lack of parking, chaotic traffic, the possible disappearance of the the Ciclovía's main section.

By the time that all of these wonderful plans and studies are ready, I wonder whether Bogotá will still be bikeable.

This blog is written by Mike Ceaser, owner of Bogota Bike Tours.