See the world without windows. 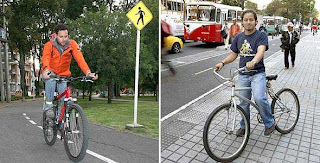 An article in Bogotá's El Tiempo newspaper profiles two cyclists, who lament the state of some of the city's Ciclorutas, their disconnectivity, the lack of parking and the inconsideration of many motorists. A city official responds that some Ciclorutas are being extended and that the city's electrical utility intends to move posts located in the middle of some cycle routes.

My comments, as always, are that the troubles with Bogotá biking go deeper than these inconveniences. They include chaotic traffic and pollution.

Bogotá DOES have the region's best bicycle route network and deserves credit for that. however, the city could and shoud do much more to make the city more bikeable if it wants this clean trasnport to help resolve its traffic jams and clean its air.