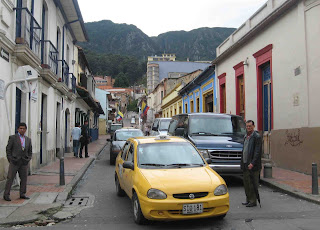 The Free ADN newspaper, of all places, has published several articles relevant to cycling.

Eleventh St., from Carrera 2 down past the Plaza Bolivar, to Carrera 10 (in La Candelaria), is to become a 'pedestrian corridor,' with restricted vehicular access.

Pedestrianization of the center will do lots of good for Bogotá. Taxis and other motor vehicles often race thru here, ignoring stop signs. With all the kids around as well as persons under the influence in this neighborhood, it's amazing that more pedestrians don't get hit. The great majority of people in La Candelaria are students and tourists, who move mostly by foot. And most neighborhood residents don't own cars. So, it's not right (is it anywhere?) that the car-using minority tyrannizes the self-propelled majority.

But I have one concern: on some other pedestrianized streets in the center, bicyclists are required to get off and walk - even tho I've never seen or heard of a bicycle-pedestrian accident in this area. What are the plans for 11th St.?

'No hay dinero para el deporte' - No money for sports!

Until recently, a sports tax was included on phone bills to pay for things such as physical activities for kids and seniors, as well as the Sunday/holiday Ciclovia. A judge recently suspended the tax, however. ADN reports that the city expected this tax to generate about $150 million in 2013, which will be lost unless the judge's decision gets reversed.

The Ciclovia, for one, has already been cut back. Will this mean they'll hack off more sections?

(On the other hand, with ETB providing such lousy and expensive phone service, it's not surprising that nobody wants to pay for it.)

They've opened a bike parking facility in the Recaurte Transmillenio Station for 162 bikes. That's a good thing. There are also already much larger bike parking lots at some major TM stations, with a total capacity for 1,640 bikes.

The lots have been criticized, however, as under-used. On average, they receive only about 480 bikes per day.

In my opinion, the city committed a fundamental, conceptual mistake by building a few huge and expensive bike parking lots, instead of doing something simple and cheap like placing bike racks at every station. As a result, most TM stations have no bike parking, while these few huge parking lots sit mostly empty. But monumental structures appear oh so much more impressive.

Meanwhile, unfortunately and absurdly, four 'Meeting points,' at TM stations, built years ago, and with capacity for hundreds of bikes, have never opened. That's because the city wants someone to take them on as a concession and run them for a profit - economically unrealistic right now.

Bike parking should be a free, subsidized service, since cycling contributes so much to cities' and individuals' health.

While writing this, I've found two facebook forums on bike parking in Bogota:

Free parking for bicycles in Bogotá.

For the right to park bicycles in Bogotá.

This blog written by Mike Ceaser, of Bogota Bike Tours and Rentals