Ten years ago, Fabián Rolando Méndez ran over and killed a cyclist.

On April 10 of this year, driving his truck drunk, Mendéz crashed into a woman and three girls, injuring all of them, two of the girls severely. 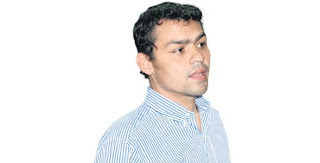 Today, after two months in prison, Méndez, of the city of Bucaramanga, is back on the street. The lawyer representing the victims said: "Mr. Mendez didn't want to injure, or much less kill, these girls. It was an accident."

And Mendéz did apologize - so, we should feel sorry for him. After all, how many drivers have the bad luck to have four pedestrians and a cyclist get in their way in only a dead - especially when they are driving drunk, and so have limited control. The pedestrians should have known better.

Sarcasm aside, a judge reduced Mendez's charges, so that he's now out of jail, even though at least two of his maimed victims are still in the hospital, having reconstructive surgery.

Ask yourself: If Mr. Mendez had been using a chainsaw, a gun, a hammer or a knife and gotten drunk and injured four people, after having killed one person the same way, would they have called it an accident?

What about if Mendez had been a taxi driver or construction worker, instead of a member of a prominent family, and ex-director of the city's Sports and Recreation Institute?

What if Mendéz's victim had been driving an expensive truck himself?

But, when the weapon is a car or truck and the person wielding it is influential and the victims simple pedestrians or cyclists, then killing or maiming are evidently forgiveable mistakes in Colombia.

Méndez's crime moved local residents to march through Bucaramanga demanding justice for the injured woman and girls.  There's even a Facebook group demanding that Mendéz pay for what he did.