The other day at Bogota Bike Tours we negligently left a bike outside, leaning against the wall. Predictably, someone came by and grabbed it and took off. 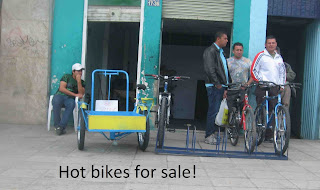 I rode around on my bike searching for the guy, but no luck. Where might a bike thief head? I rode down Jimenez Ave., which is one of Bogotá's 'bike shop rows.' Many stores there sell fancy new bikes - and a few sell nice used bikes at unreasonably low prices. Everybody knows that most of these bikes are stolen. (When I had first moved to Bogotá, I innocently went to one of these shops and bought a cheap bike. But when I took the bike to a nearby workshop to have it tuned up, the folks there informed me that it was most likely stolen. So I looked at the owner's card they'd given me and discoverd that the name on it was a (probably nonexistent) shop in Medellin. I took the bike back, and, by threatening them with troubles with the cops, got my money back. Then I bought a new bike, which got stolen soon after.)

So, I headed down to the stolen bike strip, where, lo and behold, one of the shopowners was standing in his doorway holding my bike, which he'd just purchased.

"This is my bike," I said, putting my hand on the handlebar.

"Well, I just bought it." He wasn't sympathetic.

"It was just stolen from me," I said, angry.

"You give it back to me," I insisted, "or you'll have trouble with the police. You shouldn't buy things which are stolen."

"Just take it," he relented with disgust.

A funny story, but also a pathetic one.  I read that in San Francisco, California, the police plan to do a sting operation, which will involve placing tracking devices in bikes to be used as lures. When those bikes get stolen, the cops will track them to find out who's fencing the stolen bikes.

Here in Bogotá we don't need a sting op with expensive tracking devices. I and lots of other people know exactly who is dealing in stolen bikes. Why don't the cops do anything?
Publicado por Ciclistas Bogota en 20:46