How about a form of transportation which is clean, generates little congestion, and can even be a tourist attraction?

Sounds ideal. But Bogotá's response is: Don't allow them!

Thousands of bicitaxis, or bike taxis, operate in Bogotá, carrying people for short distances, often near Transmilenio stations. Unfortunately, they're not recognized by the vehicle code, and are therefore illegal. Still, in many neighborhoods, the police have tolerated the bicitaxis and let them work. But a new version of the Transit Code would reportedly ban the bicitaxis completely. 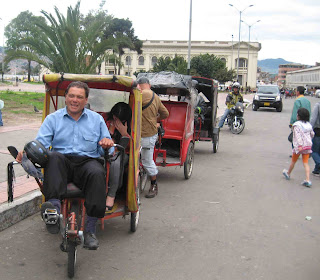 Perhaps some sane politician will choose public interest over politics and take a stand for these humble, hard-working people who are providing such a good service.