On my way home this evening I encountered these two cars crashed into each other in Carrera Septima's bike lane, across from Independence Park and almost beside the CAI police station.

My first thought was to wonder what the cars were doing in the bike lane when they crashed, or whether they smashed together somewhere else and the skidded into the lane, hopefully not taking any cyclists with them. (I'm not sure how long previously the accident had happened, but I saw no ambulances, so hopefully nobody was seriously injured.)

The second thing which struck me about the crash scene was the lack of measures to prevent cyclists from crashing into the smashed cars. On the other hand, someone had very thoughtfully placed reflectors in the street to warn drivers against hitting the cars in the bike lane. 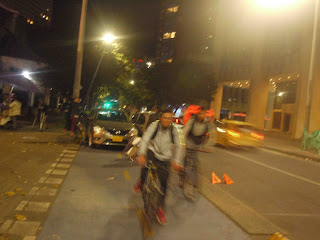