2018 Bike Week Kicks off With a Family Feud

Bogotá's 2018 Bike Week kicked off today with activities near the Virgilio Barco Library - and an unusual fissure in the bicycle advocacy community.

A friend and cycling advocate explained to me that historically Bicycle Week has been financed and organized by grassroots cycling organizations themselves. However, this year the city government stepped in to organize and partially finance the events. That generated resentment among some cycling groups, who saw it as an attempt to co-opt the cycling agenda by Mayor Enrique Peñalosa, who is deeply unpopular among leftists. As a result, my friend said, this year some half of the those who participated last year are boycotting the activities, and some cycling organizatioins from south Bogotá are even actively protesting Bicycle Week. 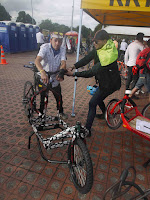 Go figger. While Peñalosa's policies leave lots to be desired, in this term and his previous one his governments have built many kilometers of bike lanes, and recently the city's Turism Institute has done a good job promoting mountain bike routes outside of Bogotá.

The full schedule of events is available at. https://www.planbici.gov.co/ 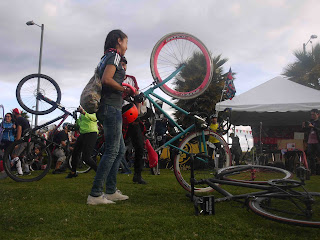