The students deserve plaudits for the bike designs, altho not all struck me as appropriate to be used as public bikes. A public bike should be inexpensive and sturdy, since many people aren't gentle with borrowed bikes. In a city with a theft problem, the bike should not be particularly enticing, and parts like wheels and chainrings should be unique, so that they can't be stolen for use on other bikes.

Most fundamentally, tho, Bogotá needs to make itself more bike friendly and give cycling real status if any public bikes program is actually to be used. The National University's own public bikes program, called BicirrUN, was shut down after many bikes were damaged or stolen. (Today, some students told me they hope to bring bicirrUN back.) Unfortunately, as long as streets are chaotic, as long as cyclists must swallow vehicle exhaust, as long as parked cars and homeless scavengers routinely block bicycle lanes, only a brave few will venture out on two wheels - as is the situation now.

The National University, whose walls are emblazoned with murals of leftist revolutionaries, is best known for protests and radical politics. But perhaps now it will lead a transit revolution. 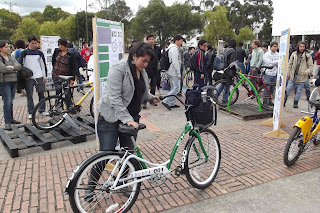 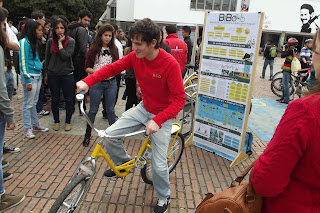 These simple, sturdy yellow bikes look like they could do the job.

And the reality on the road for Bogotá cyclists: