To the Nacho by Bike

More and more students seem to be cycling to the National University's huge Bogotá campus, but they're still a small minority of the 40,000 who study here. A group of students concerned about the environment and sustainable transport are trying to change that by teaching students how to repair bikes and training them in cycling skills.

The group, who are studying a variety of majors, holds workshops one afternoon most weeks and also arranges monthly group rides. 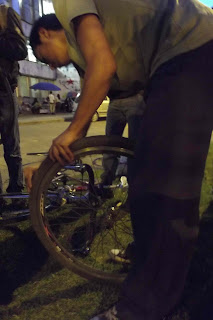 The project, which started last semester, has attracted about 15 students to each workshop and up to 25 for the monthly rides, said Tomás Suarez, an anthropology student who is one of the organizers.

At the workshop this afternoon a group of students learned how to fix flats, which is a particularly useful skill to have in Bogotá, where most of the bike shops are bunched onto just a few streets. Previous workshops have covered general bicycle maintenance, the best routes for bike commuting and cycling's health and environmental advantages.

The project at Colombia's largest university is one of several initiatives at Bogotá's private and public universities, which seem to be taking the lead in actively promoting two-wheeled transit in the city. For example, groups of students and teachers at the private Jorge Tadeo University, Central University and Los Andes University have promoted cycle commuting and organized group rides to campus.

But the National University, fondly known as La Nacho, undoubtedly has the largest number of cyclists, if only for economic reasons. Most public university students are poor or middle class and often can't afford cars or even bus fares.

"Today, something happened which hasn't happened to me for a long time," he said. "I couldn't find a place to park my bike because the rack was full."

There doesn't seem to be an accurate count of the number of people who ride bikes to the National University, altho it would be easy to make one just by posting observers with clipboards at the four entrances. A security guard at one of the entrances said that about 500 bikes enter there daily, suggesting a total of between 1,500 and 2,000, or 5% of the university's 40,000 students.

But while there usually are enough of spots to park bikes, Suarez would like to see better security. Even tho guards at the university entrances check bikes onto and off of campus, there have been cases of thefts. (That's not hard to believe, since someone actually stole an adult, pure-bred bull from the university's ag department last week.) Suarez also hopes to see a return of the university's shared bikes program, which was ended after many of the bikes got damaged or stolen. Other initiatives, it seems to me, could include a prohibition of motorized bicycles on campus and the installation of a repair shop on campus.

Perhaps the monthly rides could also develop into a Bogotá Critical Mass demonstration. After all, if La Nacho is known for anything, it's protests and activism. Several years ago, a woman from California tried to organize a critical mass ride at the Nacho, but the idea died after she returned to the States.

A la Nacho en Bici is on Facebook here.