When the police sieze bicycles, either because the bike is allegedly stolen of a cyclist's infraction, the police store them in huge lots, until in theory the owner appears  or pays his or her traffic fine. 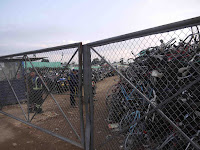 However, many of bicycle owners never do appear, and the bikes lie rusting away for years. For legalistic reasons - and undoubtedly authorities' apathy - giving the bicycles away is difficult. So, the bicycles accumulate by the many hundreds and thousands, slowly becoming worthless.

The other day, while pedaling to Parque La Florida to see a bike polo match, we passed one of these bicycle cemeteries, on Ave. Mutis, near Engativa. I stopped to snap some pictures, but when the security guards saw me they ordered me to stop. God forbid, after all, that anybody should learn about this problem. Then, someone might find a good use for the abandoned bikes, such as donating them to orphanages or poor communities, and the guards would lose their jobs. 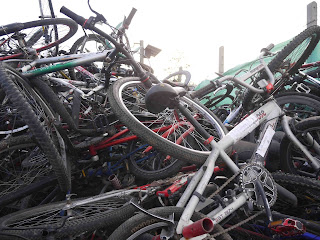 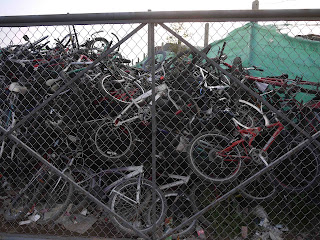