A Tale of Two Ciclorutas

The Cicloruta, or bike lane, which runs up carreras 13 and 11 from the Museo Nacional to Calle 100 represents and best and worst in Bogotá bicycle infrastructure. So much, that it's more accurately two bike lanes stitched together.

The 18-block stretch between calles 82 and 100 are wide, clear and smooth: great for cyclists' self-esteem - particularly when one is sailing past cars jammed against each other. Perhaps the sight of us free and fast cyclists will persuade a few drivers to emerge from their steel cans.

South of 82nd street, however, the bike lane shifts onto the sidewalk, where cyclists must dodge pedestrians and delivery vehicles, not to mention cars waiting at stop signs and the occasional dog. As bad as it is for the cyclist, this arrangement must be more miserable for the poor pedestrian, who steps across the sidewalk only to have a furiously pedaling commuter rush past them. And the cyclist feels like an interloper, a bully rushing between pedestrians and swerving around them. 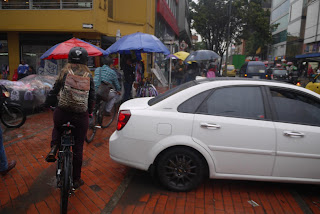