Bogotá has had a mini-boom recently in bicycle-themed eateries. But for some of them, the bicycle is merely decoration.

That's not true, however, for the awkwardly named Fuga Café + Bikes, tucked behind a building just off of 81st St. and around the corner from the 11th-St. Cicloruta, on the edge of La Zona Rosa (Calle 81 #11-55). Fuga means 'escape', as in a group of racers who escape from the pack.

Besides the bicycle racing theme: glossy photo books (strangely, mostly in English), high-end bikes on display and constant bike races on the tele, the café also has a working bike repair shop, altho I suspect that the charges are a bit steeper than the repair outfits which set up on the sidewalk along the nearby bike lane. But the repairman appears to keep busy, and the café really is frequented by cyclists, judging by the bikes in the rack outside its window.

But if you go, get your wallet ready. A tea cost me 5,000 pesos - steep by central Bogotá standards, if
not necessarily by Zona Rosa standards, or for the yuppies inside pecking away at their laptops. 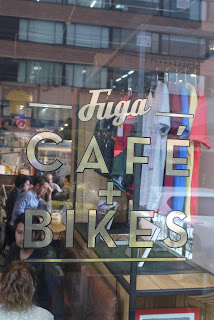 The Fuga café is out of the price range for most of the working class cyclists who abound on the nearby bike lane.