The Importance of Pruning

The bike lane on Calle 39 created last year was a useful addition for Bogotá cyclists, asi it connects the 11th-Street bike lane (and the Parque Nacional) to Teusaquillo and the Parkway. (That it is one of the few bike lanes which take space from cars instead of pedestrians is another positive.)

Since then, however, the lane has been neglected. On its first segment, to Caracas Avenue, the median strip's trees have extended their branches across the lane, and into cyclilsts' faces - a situation which would never be tolerated in a lane for cars. 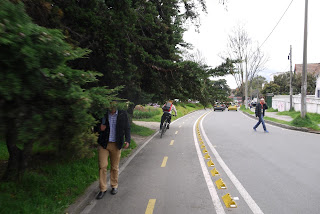