A decade ago, Bogotá, Colombia was of obligatory inclusion in any list of bike-friendly cities. The Colombian capital was that surprising example of the troubled, developing world nation, scourged by violence which nevertheless managed to promote sustainable transit, including cycling.

That was then. Today, while Bogotá still has some worthwhile cycling initiatives, other cities have leapfrogged it, with successful public bikes programs, expanding cycle ways networks and traffic calming policies. That shows in Copenhagenize's recent rankings of bike-friendly cities, in which Bogotá doesn't even appear. (It has not in previous rankings, either.)

Certainly, Bogotá does deserve some points. Mayor Gustavo Petro has promoted cycling, altho more with slogans and p.r. than durable changes on the pavements. He's added bike lanes and banned cars from Carrera Septima (altho that positive move will likely end with his administration, I suspect). But Petro's billboards and radio spots telling Bogotanos that two wheels are better than four hasn't exactly produced a flood of cyclists. Rather, Petro has overseen a record increase in private car use and actually a drop in bike commuting, if statistics are to be trusted.

The Colombian capital also falls flat in terms of public bicycles. The Petro administration did, finally,
issue a contract for such a program a few months ago. But the contract conditions are economically inviable, it seems to me, and neither do the company's owner's history of corruption problems bode well for the program.

As for cyclists' social acceptance and traffic conditions: Don't ask me after a day like today, when cars refused to stop for cyclists unless we physically blocked them, and cabbies seemed disposed to run right over us, when confronted by the outrageous prospect of giving way to a non-motorized vehicle. If Bogotá managed to achieve a two-wheeled modal share of 20% or even 10%, then motor vehicles might get used to us and give us some respect. But just a few percentage points won't do it. 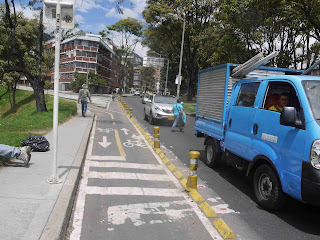