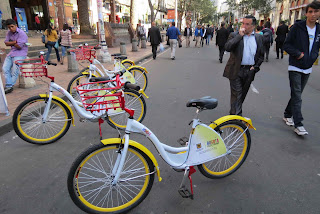 With a bit of fanfare, Bogotá introduced new-style public bikes for its lending program on Ave. Septima. The new bikes -  which can only be used on the pedestrianized stretch of Ave. Septima between Plaza Bolívar and 24th - look solid and simple, with mud guards and baskets (and even a few tandems). They're not as sophisticated or expensive as the mountain bikes they used previously - but also less attractive to thieves - and perfectly adequate for flat downtown Bogotá. And, according to El Tiempo, the bikes are equipped with GPS tracking devices.

But city officials also changed the registry system. Before, you just walked up and displayed your cedula and they snapped your picture. Impressively, the service has had little trouble with crime. Now, users must first register with the Institute of Recreation and Sports (IDRD), fill out a form and provide references. Predictably, use of the bikes has plummeted - from 300 per day to just 80, one worker told me.

"Many people come to downtown sporadically," he said. "They don't want to take the trouble."

The new registry system might be useful when the service is expanded to other spots in the city. But for La Septima, the walk-up system worked fine, so why not continue? They could use both systems together. 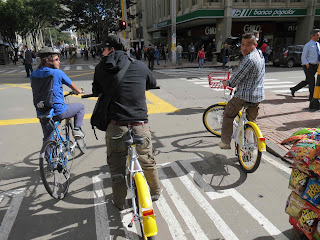 Bogotá's public bike program is expanding with frustrating slowness - but in a way that's healthy. If they had instead started out with an ambitious but impractical program which had collapsed in fraud and scandal, it might have buried prospects for public bikes for a long time, as well as scarring cycling in general.

An employee told me they now have 300 bikes and plan to add new lending points in central and north Bogotá.

El Tiempo reports that during its first year the program were used 45,000 times.


The program is still free, and I wonder about its sustainability, especially after Mayor Petro leaves office (which might possibly happen soon, since they're trying to recall him). 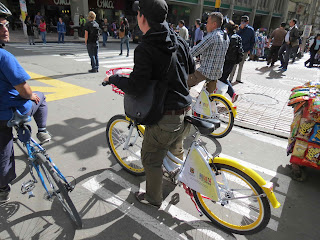