Car-Free Day 2011, on Thursday Feb. 3, brought out more cyclists, but not the crowds of pedalers I'd hoped for. More importantly - do Car-Free Days create any lasting changes? 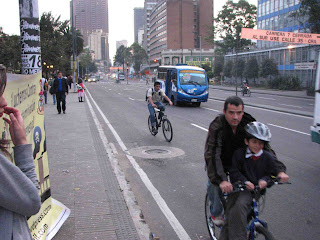 Certainly, the streets were less congested and bicycling more bearable. Here are some cyclists passing our clean-air protest on Seventh Ave., enjoying more than the usual road space, and slightly cleaner-than-normal air. El Tiempo reported that the number of cyclists increased 46 percent on Car-Free Day.

A few of us from Bogotá Bike Tours protested the city's horrendous and clearly uncontrolled pollution. I felt a lot like Don Quijote charging windmills as we hung out our banners and talked about air pollution to pedestrians who mostly walked past uninterested, often smoking.

I reflected on how many bogotanos were likely complaining right then that their favorite TV show was canceled, that there are no grapes in the market, that the car is dirty, that the maid is late, that the ice cream is frozen too hard...and only four of us out of those nine million bogotanos were out protesting something which must sicken and kill thousands of people every year.

During our protest, a sampling of Bogotá's bicyclists passed by, including several fixie riders on their super-light machines, a Spanish woman who told us about the Bicing public bikes in Barcelona and, most memorably, Green Man with his lighted-up bike, who carries on a constant and very quixotic campaign for environmental sanity.


I doubt the day will spur any lasting changes in bogotanos'  behavior, or respect for cyclists and other non-motorized travelers. The day after, pollution was back out in force, and cars once again blocked pedestrian and cyclsts-access, because nobody counts in this town unless they're motorized!