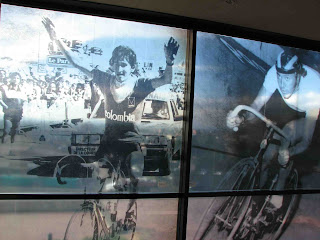 Thanks to its Spanish inheritance and many mountains, Colombia may have produced more great bicycle racers per capita than any other nation outside of Europe. Until Jan. 31, the Archivo de Bogotá has an exhibition about Colombian bicycle racing, its heroes and the epic Vuelta a Colombia. In Colombia, bike racing really rates, and may be the second most popular pro sport after futbol (soccer).

The Vuelta a Colombia is shorter than the Tour de France, but its passes are higher, making it one of the most demanding bicycle stage races in the world.
Perhaps thanks to Colombia's many mountains, the country has produced many great climbers. In fact, since 1985 four of the Tour de France's King of the Mountains title holders have been Colombian, the last two being Santiago Botero and Mauricio Soler.
Probably my favorite aspect of the exhibition was the look at a time when the races seemed more epic, the sport more innocent and every victory wasn't tainted by doping accusations. And remember those sleak, elegant bikes with Campagnolo components, made by Italian craftsmen steeped in cycling tradition, rather than some factory in East Asia, where the workers couldn't care less whether they were making parts for boats, planes or bicycles.


Juan Pachon and Miguel Samaca, riders from other eras, now compete in sales on Carrera 13.