Where did BicirrUN run off to?

BicirrUN was a program of free public bicycles for use on the Bogotá' campus of Colombia's National University. The Bogotá campus, formally called the 'University City,' is huge, so walking between classes can take time. 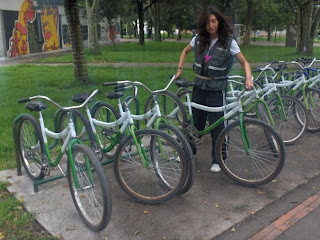 BicirrUN, begun in 2006, consisted of some 300 bicycles (at a time) distributed across the campus. These were simple one-speeds (the campus is flat) with only one brake and often just a cable in place of the lower tube and were left in bike racks and by building entrances so that people could grab them and ride to their destinations, where they left them for someone else.

Besides saving time and (human) energy and popularizing cycling, the university bikes program also served as a template for a possible city-wide public bicycles program.

The project was Bogotá's third large experiment for promoting cycling, following the Ciclovia and the Cicloruta bike path system. It could be seen as a pilot for a possible municipal public bicycle system. Unfortunately, so far it has failed. 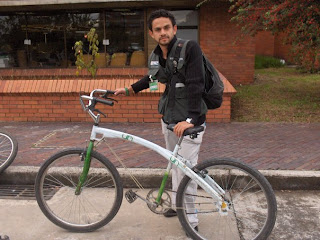 Unfortunately, in 2009 the program was folded and the bikes placed in deep storage below the university's nursing building. According to reports, the program cost too much - some of the bikes disappeared and many more were damaged by people doing things like going down stairs and leaping from rocks. It became unsustainable.

Fortunately, administrators are looking for a way to restart BicirrUN. They've talked about an education campaign and/or requiring users to check out their bikes, like library books.

How could the program be made viable?

An electronic credit card-type system is just out of reach because of cost.

And having people check out bikes for 20-minute periods also seems impractical. The university would need an army of monitor to administer the system.

But what if bikes were checked out for 24-hour periods? Users might also receive locks, or have to bring their own. Such a system might also permit students to take the bikes of campus, so that they'd become commuter vehicles as well. In case of damage or loss, the user would be required to pay the costs or lose the right to participate in the system.

Another note: Lots of National University students and faculty bring their own bikes onto campus. The campus is crowded with entrepeneurs who rent cell-phones, sell food, pirated music and other stuff. So, why hasn't anybody thot of creating a bike repair shop or stand on campus?
Publicado por Ciclistas Bogota en 20:40