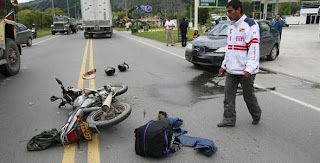 According to a report the other day in El Tiempo newspaper bicycle (and motorcycle) fatalities have risen dramatically. As for motorcyclists - well, they are crazy. Most of the city's motorcyclists are messengers. Combine the qualities of a risk-taking personality with the power of a big motor between the thighs and lots of deadlines, and there's no surprise that lots of them skid out and smash into other vehicles.

Many cyclists, of course, also ignore traffic laws. But since all they've got is leg power instead of horse power at their command, they're much less capable of doing themselves or others harm. Rather, I see many cyclists endangered by those rushing taxis and motorcycles which run stop signs and red lights and turn right across cross walks, taking for granted that pedestrians and cyclists will rush out of their way.

Still, there's a big asterisk by the bike fatalities stats: Between January and August 2009 four cyclists were killed on Bogotá streets, which shot up to 12 deaths this year. That is tragic and worrisome. But, in a city of eight million, numbers like 4 and 12 might not be statistically significant.

Nevertheless, there are some basic things which transit authorities ought to do. For a start, they could actually enforce basic traffic laws like stopping at stop signs. Wait at any Bogotá intersection and you'll see car after car, and particularly taxis, sailing past stop signs - even in pedestrian-heavy neighborhoods like La Candelaria. Inevitably, there are lots of car-car collisions and deaths of pedestrians and cyclists are also inevitable.

Another factor is the nation's failure to punish drunk drivers - even those who kill people - despite a law passed last year supposed to impose real punishments for drunk driving.

Another step is to use the media and the law to give pedestrians and bicyclists priority in traffic - as they have in just about every other country in the world.