A common sight for cyclists everywhere - thoughtless drivers blocking bike lanes. This lane, in the Parkway in Bogotá's Teusaquillo neighborhood, is also used by pedestrians, wheelchair users, skaters and others. But this man clearly doesn't care. He even appears proud. (After I said somethign to him, he did say 'You're right' and move his car. A tiny victory.) 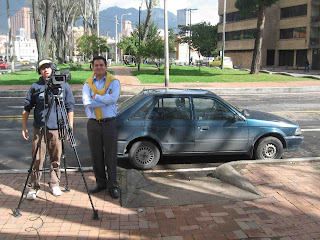 Imagine, just for a second, a bicyclist parking his bike sideways across a car lane. It would be a scandal! A criminal act! At least, an act of civil disobedience requiring imprisonment. 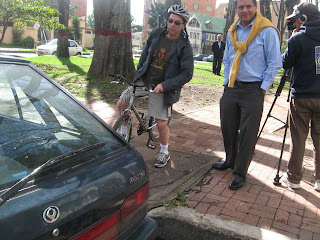 This blog brought to you by Mike Ceaser, of Bogotá Bike Tours and Rentals