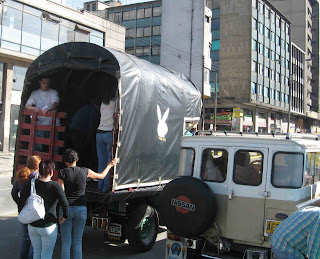 What's this scene of commuters piling into a truck got to do with bicycling? Plenty!
Today, the city's commercial bus drivers went on strike. That's bad, because so many people depend on the buses here. But the drivers were striking against the city's policies designed to organize and clean up the city's dirty, chaotic and inefficient private buses.
That's fundamental for cyclists, because the city's chaos can make cycling dangerous and unpleasant, not to mention the damage from the pollution belched by buses like these below. Of course, many private vehicles also pollute unjustifiably, especially those new Chinese trucks. But, in Bogotá, buses still generate the lion's share of vehicle pollution, and until now many are obviously flouting the law - to the harm of all of us. The bus owners' strike shows that finally the city is really cracking down - or trying to.
In the end, the strike lasted four days, until the city agreed to give the bus companies a bigger slice of the income from the planned Integrated Transit System. With that system, some 8,000 older buses are supposed to be junked and replaced with 2,000 larger, cleaner and more-efficient buses. Let's all cross our fingers! 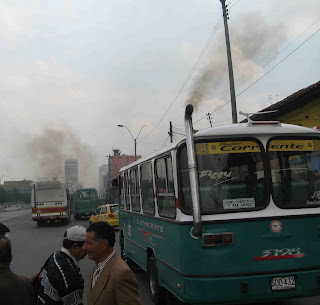 Ecoaire is a clean air organization created by, of all people, Ecopetrol, Colombia's state oil company.
This page is supposed to provide Bogotá's daily air quality, but I can't get it to work.
Here's my take on Bogotá transit on my other blog.
This blog is written by Mike Ceaser, of Bogota Bike Tours and Rentals
Publicado por Ciclistas Bogota en 17:30