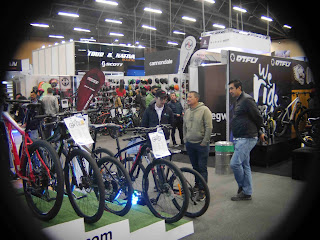 I suppose I shouldn't have felt surprised to see that this year's BiciGo event is mostly about consumerism. After all, it costs a lot to rent space in Corferias, particularly with Christmas looming.

But, for an event whose 'honored guests' came from Holland, land of the commuter cyclist, the emphasis might have been less materialistic. The Corferias hall was filled with shiny, hi-tech multi-million peso machines, which only a tiny percentage of Colombians could afford, and which nobody really needs. On my way out, I saw a Cannondale bike with a 26 million peso price tag (I won't say that it's worth that much). The asking price, of course, doesn't include the bodyguards you'd have to hire to be able to ride that bike down the street, or the insurance policy, or extra locks and alarm system for your house, or the  sleep you'd lose worrying about getting robbed.

In other words, that bike and many others are useless status symbols.

BiciGo did have some more positive aspects, such as talks and discussions about bike commuting - which in Bogotá will never happen on 26-million peso machines - cycling in Holland and Colombia's Boyaca Department, the bicycle industry and others. It also has bike repair workshops, which actually looked pretty good.

BiciGo also had riding lessons, a display of classic bicycles and some interesting products made by small local businesses, such as colorful bandanas, backpacks and even a sort of bicycle rain roof which made me worry that a gust of wind could turn it into a sail.

Yet, strangely, BiciGo's participants included a company selling four-wheel, motorized all-terrain
vehicles, whose only connection to the fair was their name: 'dirt bikes.' If cycling is supposed to be environmentally friendly, these vehicles are environmental disasters. Nobody I spoke to knew why they'd been invited. Perhaps a language issue, since the vendors were Asian.

On my way to the fair I passed a bike lane that the rain and bad urban design had converted into a river. Leaving the fair, I passed a bicycle whose unwary owner had left locked to a street sign but returned to find that a thief had gotten to his bike first and stolen what he could and mutilated the rest. While I was contemplating that sad scene, a truck roared by belching a plume of smoke.

It's nice to see bicycles and cycling getting attention and even throwing around some economic weight. However, it seems to me that Bogotá and Bogotanos can put resources to much better use for bicycling promotion than than spending thousands of dollars on trophy machines which are too expensive to use.