To School By Bike

Thousands of kids are cycling to school these days thanks to a city-sponsored program which provides bikes and guides to get kids used to pedaling.

'Al Colegio en Bici' (To School by Bike) lends bikes to students, which they are expected to use daily and take home at night. A guide rides a circuit before school, picking up children at their homes or pre-arranged pick-up spots. They form a caravan on their way to campus. After school, the process happens in reverse.

Children also learn basic mechanics and receive helmets and other things as prizes. In addition to commuting to school, the program also organizes cycling outings to parks, museums, historical sites and other destinations. Some 6,000 students participate, according to El Tiempo, under the watchful eyes of more than two hundred guides, primarily in middle- and lower-income neighborhoods. The idea is to set mobility and physical activity patterns the children will follow through the rest of their lives.

Unfortunately, only a small proportion of students can participate - perhaps 20 or 30 in a whole
school.  'It always fills up,' says a friend who works with the program.

Of course, many other children ride to school on their own bikes. 'The school bike parking lots are always full,' says the friend.

The program has been marred by tragedies. Recently, a guide was hit and killed by a bus, and a child whose parent didn't meet him at an after-school pick-up spot was fatally struck by a car as he tried to make his way home.

Both tragedies may say more about the habits of Bogotá drivers and the unruliness of the roads here, than the Al Colegio en Bici program.

With luck, the program will have a multiplier effect, by making the cyclists the envy of their classmates, and motivating others to buy bicycles or take that old bike out of storage. 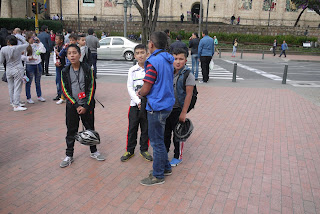