ARTBO, Bogotá's annual art festival, has added bicycle transport this year - and they're actually doing it right, albeit on a small scale. (See a few of ARTBO's works here.)

The festival, using city-owned bikes and employees of the Spinning Center gyms, has set up six lending sites, each initially with eight bikes. The idea is for art fans to pedal from one exhibition to the next, altho once you pedal out of sight they have no way to know whether you're off to more art or to your lunch date. The service is free, but you must show I.D. and have signed up on ARTBO's website.

By allowing riders to pick up bikes at one spot and drop them off at another, this private initiative already puts itself ahead of the city's very limited, but still missed, bicicorredor lending program. The city required you to drop the bike off near where you'd picked it up, which wasn't very practical for transportation, and the program was ended last year.

The city's much-promised full-scale bike lending program has not gotten off of the drawing board.

On the Jimenez Ave. lending site outside the Espacio Odeon gallery this afternoon, the employees said they'd lent about six bikes. Not so many, but that's still six more rides than without the program. (On Saturday they appeared to be much busier.)

However, absurdly, you also need to have signed up on the website in order to park a bike. One of the employees agreed this was counterproductive. "A lot of people have asked to park their bikes, and would have visited the gallery," he said. 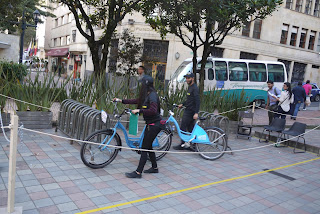